Rubbish piles up as MM set to meet workers 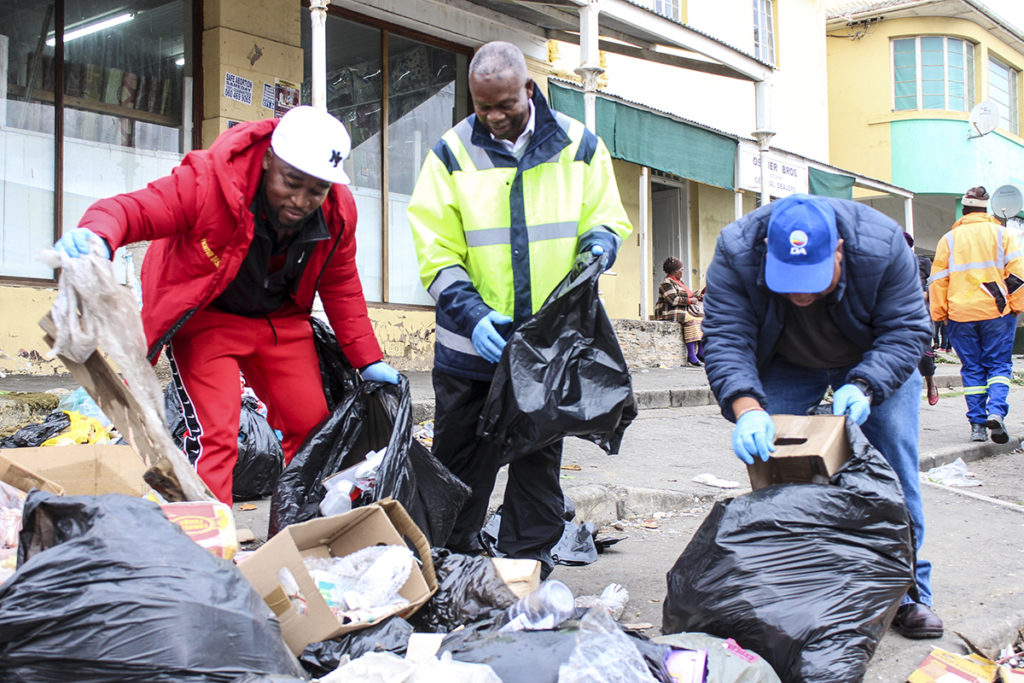 Around 500 members of the South African Municipal Workers Union gathered in the City Hall this morning were scheduled to meet with Municipal Manager at 9am. A list of around 20 grievances saw staff in Makana Municipality’s Cleansing and other departments embark on industrial action on Monday.

Private collection services have been kept busy picking up rubbish from homes and businesses in the city and with rubbish bags left in CBD streets torn open by dogs and donkeys and strewn across the tar, three councillors, one of them the Mayor, joined forces across party political lines on Tuesday afternoon 1 October to clean up a huge pile of rubbish in Beaufort Street.

Replying to Grocott’s Mail’s questions, he said, “No we are not on strike.

“We have some unresolved issues and are still waiting for the Municipal Manager to respond. He  promised to come back to us tomorrow (Wednesday), he told Grocott’s Mail on Tuesday.

“We are coming to work: we’re clocking in and waiting at the Town Hall for a response.”

Among the issues, Duruwe said, was that agreements made in the municipality’s Local Labour Forum hadn’t been implemented.

Grocott’s Mail understands there are about 20 unresolved matters that SAMWU’s sit-in revolves around and we have been promised this list of grievances. Attempts to contact Municipal Manager Moppo Mene for comment have been unsuccessful.

However, we understand that at least some of the revolve around pay disparities and a proposed no-work-no-pay regime, and that there are still outstanding issues over protective clothing and tools of trade.

In a message shortly before midday Wednesday, Makana’s Communications office posted on Facebook: “The municipality would like to appeal to residents to please keep their refuse inside until further notice. This is due to the fact that employees have embarked on a go slow. We apologise for the inconvenience.”

Private contractors Pieter Burger and Cindy Deutschmann have had their hands and bakkies full with calls to pick up rubbish and recycling from homes and businesses. Both expressed frustration at the attitudes of some residents who left rubbish on the street, rather than keeping it away from the dogs and donkeys that scatter it across the tar in search of food.

“People leave their bags on the street, even though they know they won’t be collected,” said Deutschmann.

Burger said, “We’re not just picking up black bags, we’re having to pick up people’s filth from off the street.”

Describing his interaction with residents who dumped their rubbish on the street the day before, he said, “The bags had been ripped open and their were nappies that we had to pick up for that family. When we spoke to them about what they were doing, they just stared at us.”

On Tuesday afternoon, Makana Mayor Mzukisi Mpahlwa, along with councillors Xolani Madyo (DA) and Siyabonga Bashe (EFF) got stuck into cleaning up a massive pile of rubbish dumped in Beaufort Street. Fruit peels, nappies, donkey and dog faeces were thrown together with piles of recyclable plastic, paper and rain-soggy cardboard. The picked it up, put it into black plastic bags and loaded it on to the back of the Mayor’s personal bakkie to take to the landfill.

Grocott’s Mail recommends residents keep their rubbish and recycling secured on their property until services resume, or you can get a reliable contractor to come and collect it for you.

We will continue to report.