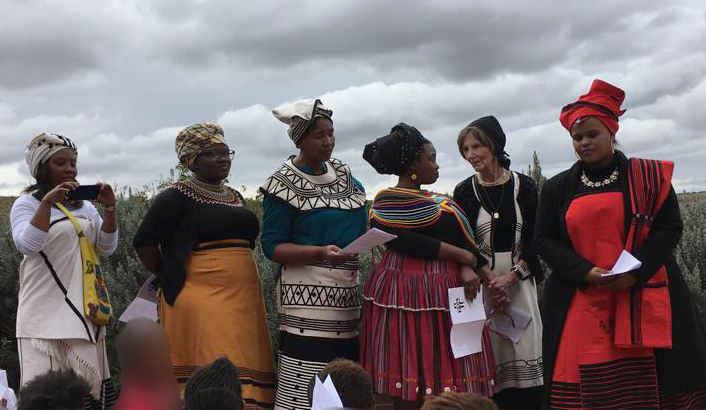 The new wing of the Holy Cross School at the Monastery on the Highlands Road was opened recently at a dedication service led by the Bishop of Grahamstown, Ebenezer Ntlali and Bishop Stacey Sauls, CEO of US-based educational NGO ‘Love Must Act’. The new buildings will provide classrooms for the expansion of the highly successful school to Grade 7 over the coming years. Grade 4 was introduced this year and Grade 5 is planned for next year.

The school was established in 2011 by brothers of the Anglican Benedictine Order of the Holy Cross, who stepped in to provide educational support for children with the collapse of the farm school system in the area. They have recently relocated to Hermanus and have given their buildings to the school and to DSG.

Bishop Stacey said the school was implementing a holistic educational system according to the highest international standards and that his organization ‘Love Must Act’ had adopted it as the principal model for their school development projects around the world. Their inputs aim to empower local communities rather than fostering long-term dependence.

Professor Di Wilmot, Dean of Rhodes Education Faculty and member of the St Cyprians Church at Highlands, handed a cheque for R35 000 to the school principal Kary MacConnachie for the purchase of equipment for the new Grade 5 class room. The funds were raised at the successful St Cyprians Country Fair which was held at Highlands the previous Sunday on 8 September.

Prof Wilmot thanked all those in the Makhanda (Grahamstown) community who had supported the Fair and enabled the local community to contribute to the education of farm children living along on the Highlands Road. The Oppenheimer Foundation has also supported the school expansion project and was represented at the dedication by Barbara Proudfoot.

The Holy Cross brothers had initially responded to the schooling crisis in the area by first transporting local farm children to schools in Makhanda. But with the construction of the new school at the monastery the tide has turned and around half the children now come out to the school every day from Makhanda.