No ruling yet in UPM vs Makana 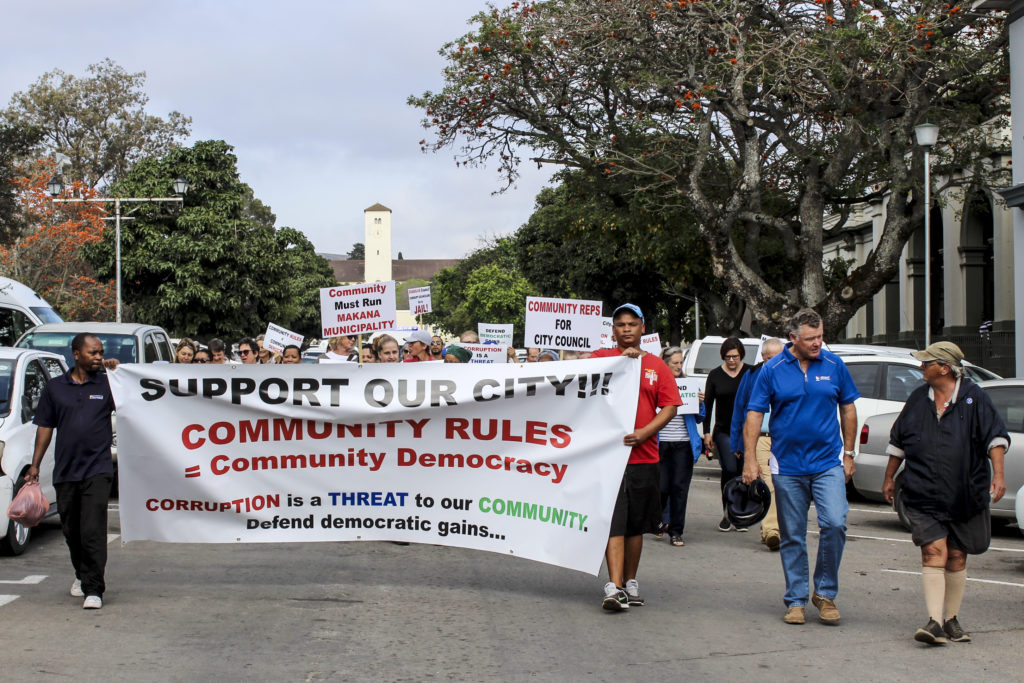 Protesters in support of the UPM’s Thursday 12 September 2019 bid in the High Court in Makhanda to have Makana Municipality put under full administration. Photo: Sue Maclennan

Justice Igna Stretch reserved judgment in the long-awaited showdown between the Unemployed People’s Movement and Makana Municipality in the High Court in Makhanda on Thursday 12 September. In three intense and tightly managed sessions on one day, with only two short breaks, the Judge heard arguments on the Unemployed People’s Movement’s application for the Makana Council to be dissolved and for the municipality to be put under full administration.

Lawyers for the UPM, Wheeldon, Rushmere & Cole, in February 2019 filed papers on their behalf in the High Court in Makhanda calling for the dissolution of the Council and the appointment of an administrator in terms of Section 139(1)(c). The UPM has taken Makana Municipality to court for allegedly breaching its obligation to ensure the provision of services to the Makana community in a sustainable manner, promoting a safe and healthy environment, and managing its administration, budgeting and planning processes to serve the Makana community’s basic needs and promote social and economic development. The court documents cite sections 152 and 153 of the Constitution in this regard.

The 15 respondents listed alongside Makana’s Mayor, Municipal Manager and Council in the UPM’s application include the Eastern Cape Premier and his executive, the MEC and Minister for Co-operative Governance, the South African Municipal Workers Union and South Africa’s President.

From Cape Town was Senior Counsel Jan Heunis with Port Elizabeth Advocate Bevan Boswell JC, for respondents 1-4 (the Premier, the Provincial Legislature, the co-operative Governance MEC and the MEC for Economic Development). Whitesides are their Attorneys. The Premier’s legal adviser was in the gallery taking notes.

The sixth respondent, the Minister for Co-operative Governance, was represented by Sandton advocates Kameshni Pillay SC and Vuyo Obonah with Whitesides as Attorneys.

In the strange leveller that the courtroom is, the Mayor and the Municipal Manager, as well as councillors from both the DA and the ANC sat in the gallery elbow to elbow with members of the UPM during this potentially precedent setting case.

May 2018 saw former Cooperative Governance and Traditional Affairs Minister Zweli Mkhize visit Makana Municipality as part of a tour of 87 local municipalities across the country identified as dysfunctional. In March 2019, he told Parliament many had turned the corner thanks to interventions through the Municipal Infrastructure Support Agency (MISA).

In an Emperor’s New Clothes deposition, the UPM argued last week that they and other citizens had experienced no change, with or without interventions, and that a different kind of solution was needed.

While none disputed the state of crisis the city was in, the respondents’ arguments were around three main points: whether the full administration under Section 139(1)(c) was the correct remedy; whether, in terms of South Africa’s Constitutional Separation of Powers the Judge was in fact entitled to make a ruling on how the State should act in this case; and interpretation of the various Acts governing local municipalities, and how they should interact with other state structures.

Both Heunis and Jamie went into great detail on laws governing local municipalities – various Sections of both the Constitution as well as the Municipal Systems Act and Municipal Finance Management Act – and their interpretation.

In a gloves-off response that ended with demanding the applicants pay full costs, Heunis swooped on the UPM team’s mention of financial crisis in its founding affidavit. He argued that because all the municipality’s problems were as a results of a financial crisis, the UPM’s case should have been based on provincial intervention in terms of the Municipal Finances Management Act, rather than the Constitution’s Section 139(1)(c) dissolution and full administration.

In an interesting twist, Heunis argued that the Finance Act intervention was in fact the correct remedy, because it effectively took over governance of the entity. A 139(1)(c) dissolution was a short-term solution because it would simply replace political players in local government instead of addressing administrative problems.

Jamie focused on the Municipal Structures Act to argue about the definition of a municipality and its precise roles and functions. He like Heunis sought to restrict argument to Makana’s financial crisis.

“While complaints are raised about a range of service delivery failures, these are attributed in main, if not solely, to the financial crisis plaguing the municipality,” Jamie said in his heads.

“There’s little in issue around the fact that this municipality amounts to a disaster,” Smuts said. “What is in dispute is what should be done about it.”

Smuts emphasised that the problems in Makana Municipality were far greater than its financial crisis, and so the Province’s decision to implement a Section of the Municipal Finance Management Act as a remedy would not solve the municipality’s problems.

“While a financial crisis does exist in the Makana Municipality, the uncontested evidence establishes thast the crises in municipal governance extend way beyond the financial,” Smuts argued for the UPM.

In addition, he said, two successive interventions and turnaround strategies identical to that proposed by the Province had failed.

Since 2015, Makana Municipality has twice been placed under partial administration.

“The disaster we have now follows those interventions – which allowed the continued existence of Council while carrying on some form of administration.”

Smuts said the obligation of the municipal Council was as an efficient frontline development agency, in terms of the Municipal Systems Act. He cited crises in finances, management of staff, municipal buildings, sewage spills, air pollution from the burning landfill, unsafe water, waste removal, roaming animals and inadequate firefighting capacity as among proof of a gross failure to honour this executive function.

Unable to resist adding local colour, Smuts related crossing High Street to get to the Court earlier and avoiding a cow pat. That cow would not decide to return to its paddock on the basis there was a financial management plan now in place, he said.

“The respondents do not prove anywhere that the crisis is just financial,” Smuts said. “The large number of crises is because of the municipality’s failure to adhere to principles of good governance.”

A group of around 30 protesters who had marched to the High Court before the 9.30am start swelled to around 300, as members of the UPM joined other residents outside the court. Earlier plans to stage a march across the city had been cancelled because of the volatile social climate. Explaining their decision to cancel a bigger march across the city, the UPM said the recent spate of gender based violence and xenophobic attacks had made the situation too volatile. Public Order Police from Port Elizabeth monitored the area.

There were no fewer than four full sets of counsel in the High Court, all but the UPM’s flown in, plus their briefing attorneys. The Judge was surely aware of this and ran a tight ship with only two short breaks during a near-seven-hour marathon hearing, frequently asked the Senior Counsel for clarification and elaboration on points during their arguments. At one point she explained, “I need to understand what happened in the past and do my best to assist the municipality in future.”

Judgment was reserved. Briefing Attorney Brin Brody afterwards said this could be anything from a week to three months. On Tuesday 17 September, he confirmed there had been no indication of when judgment would be delivered.

WHAT WAS THE ARGUMENT ABOUT SEPARATION OF POWERS?
On whether the Judge was entitled to make a ruling on intergovernmental interventions, Ismail Jamie SC said, “Given the nature of the discretion to be exercised, and the far-reaching effects of any intervention, on the constitutional scheme as well as the effect on the residents of a municipality, it is submitted that for a court to order an intervention, let alone decide what form of intervention… would amount to judicial overreach and a breach of the separation of powers principle.”