Heat and dust at SA champs 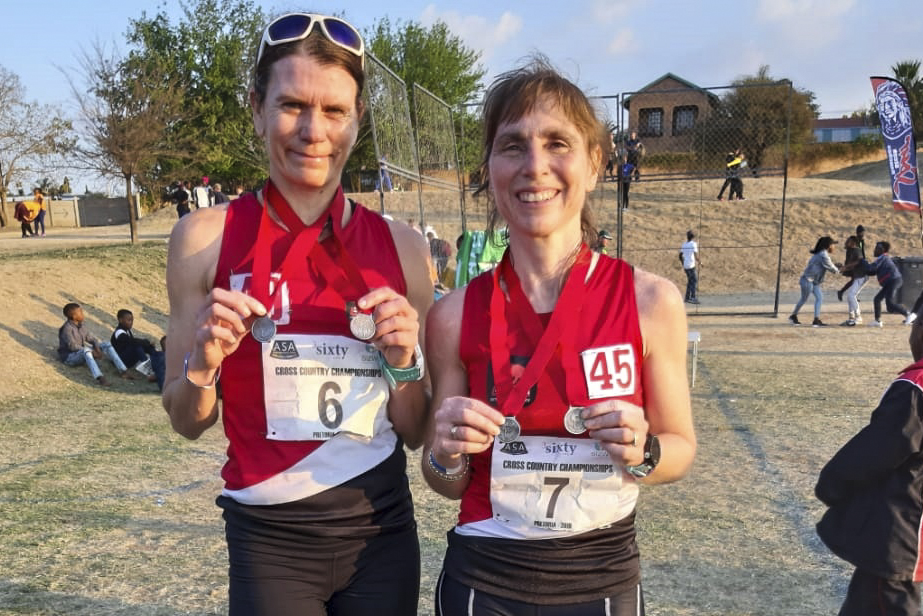 Each did 4km races in two categories. Penney competed in the veterans 40-44 and – for the team prize – the Senior Women’s 4km.

“It was a great honour racing with and against ladies 20 years younger than me,” Penney said.

It was a day of contrasts – cold in the morning, then hot with wind later, but Penney managed to post a season’s best at altitude, with 16:56 for the first 4km race and 17:19 for the afternoon Senior event.

“It’s very different from other kinds of running events,” Penney said. “Much more intense, and sometimes technical and hilly.”

Not really her favourite event, but she enjoyed the challenge. Next on her calendar is the Kowie 27km on the first weekend of October. Then she’ll train for a marathon at the end of the year that will qualify her for her 16th Two Oceans Ultra Marathon.

The course was run over part of a school rugby field and then mainly over very dry, dusty and uneven veld.

“You needed to watch your footing constantly. There were also three long hills and a short steep one just before the finish. There was a wooden ramp from the field on to the veld and you had to be careful you didn’t trip.

“ My first race went fine, but I think I started too slow as I was nervous that the altitude would affect me,” Banfield said. “So I got boxed in (about 300 ladies start together) and didn’t run my 1st km fast enough. Then it was tough to try catch up. My official time was 17:15, and I came 14th out of 60 competitors.

“My second race I started a lot faster, with only about 100 starters. I was more relaxed, as this was not my main event, and had only been asked to run this race on the Friday night! It was more for fun than performance. My quads were extremely tired by the end, as I had not trained to run two races in one day, but I still managed a decent time of 17:25. (34th out of 46).”

Because cross country is over uneven ground, with many different surface types, you can’t settle into a constant pace

“There are often tight turns, ups and downs, through mud or water, over gravel etc. So you need to concentrate the whole race. You also need to be able to adjust your speed, be able to decelerate and accelerate when needed.

“It is definitely my favourite running event. It is never boring!

Her plans for the rest of the season are to increase her distance training.

In the 10km Senior Women’s cross country race, Glenrose Xaba crossed the line in 34:25, 45 seconds ahead of perennial rival Kesa Molotsane, who was second in 35:10. Aynslee Van Graan took third in 35:56.