Kuyasa – a place to shine 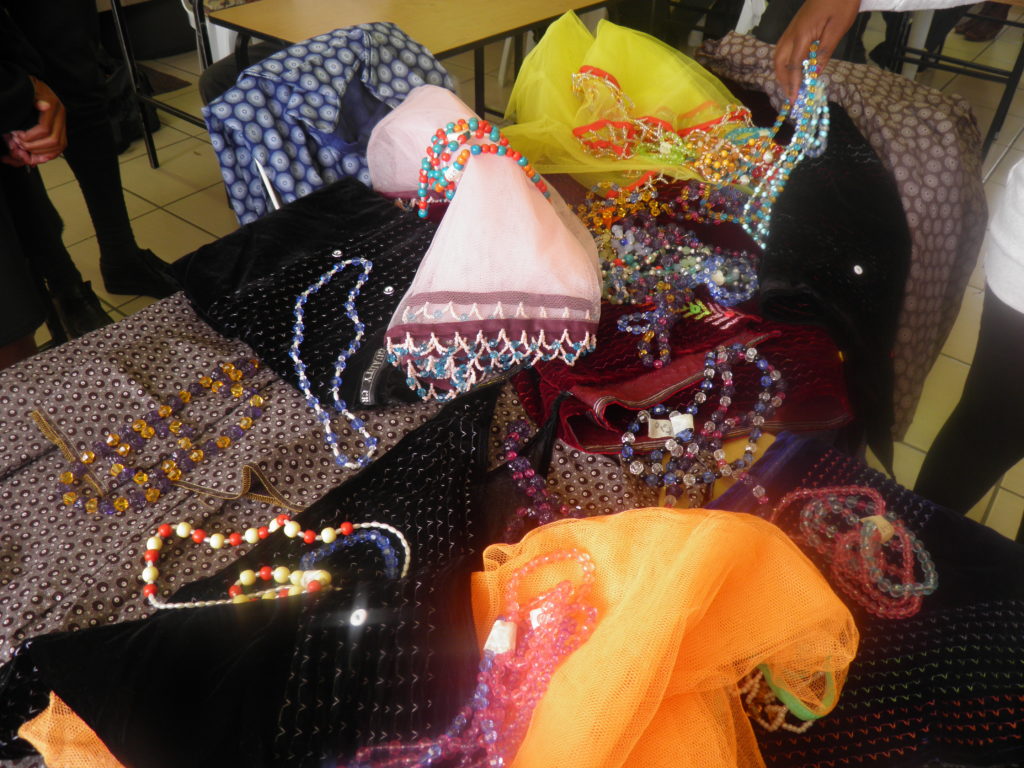 Some of the works done by the school kidsOLYMPUS DIGITAL CAMERA

All children can learn – but different children need different kinds of learning. That’s the starting point for teachers, parents and learners at Kuyasa Special School in Makhanda (Grahamstown). Lindani Donyeli speaks to the school community about ability, society’s attitude to difference, and the joy of achieving your own potential.

Nomahlubi Mahlasela has recieved a gold medal on netball she was the best shooter.

“I feel very happy about receiving a gold medal,

“Because we go to Kuyasa, people jeer and call us names,” said Nomahlubi Mahlasela, who was recently awarded a gold medal for being the best shooter at a district tournament.

“But I felt very happy holding that gold medal and I show it to people who tease me,” Nomahlubi told Grocott’s Mail. “When we do sport, I feel good because I enjoy myself.”

Devernito du Plessis is a runner who brings medals home for the Eastern Cape.

“I feel very grateful for these chances I get, said Devernito.”I feel happy and special when I can take part.”

Fellow athlete and soccer player Lucky Ncuthu said, “I felt very happy to receive medals and gold. I was well prepared, because I did lots of practice.”

They are very proud of their school because it’s given them a chance to show off their talents. During the week of writing this article, they were scheduled to take part in a basketball tournament at St Andrew’s College and represent their school in athletics in Port Elizabeth. Both have won medals for the school.

“We are all born differently. It is not for parents or a child to decide what a child must be like,” says Cora van Vuuren, psychologist at the Department of Education’s Grahamstown Cluster Management Centre (formerly District) office. “Children are not disabled, they are differently able.”

The mission of Kuyasa Special School for intellectually, physically and environmentally challenged pupils is to develop each child’s potential, by focusing on their special needs and responding accordingly to foster their independence, help them develop acceptable social skills, instil sound moral values and encourage their participation in sporting, cultural and spiritual activities.

A special school needs special people to run it, and Principal Diane Steyn and Deputy Principal Mutiwe Zondani have the skills and understanding to create the right setting for every child to reach their potential.

Their vision as a Special School, Steyn says, is to strive towards excellence in teaching, through guiding and assisting each unique pupil in the school to reach their maximum potential. They aim to provide a stimulating and caring environmental where teachers and pupils alike find fulfilment and achievement.

Many of the children come to the school traumatised by how society has treated them so far. Bullying and prejudice make it difficult for them to function.

“There was a child in my class who did not speak for eight months,” said Steyn. “He was too scared to ask questions.”

“Children get told that Kuyasa is for mad people who take Fort England tablets,” said Zondani.

The roof of the school is red and so some members of the community associate it with Fort England Psychiatric Hospital, coloquially known as “Rooidakkies” because of its red roofs, easy to spot from miles away.

“Some kids asked the teacher if they can’t change the colour of the roof,” related Zondani.

The teacher told the child, “No – if we do, we will change everything according to what people say.”

“In the neighbourhood when the children play and someone cries, parents ask if the culprit is from Kuyasa.

“‘Don’t play with Kuyasa,’ is what some parents will say,” Zondani said. “So the children of Kuyasa don’t feel free to play with others, because of the adults around them.”

Some children don’t want to come to the school, or avoid being seen using the marked school transport because they don’t want to be labelled as “Kuyasa Kids”.

The difference between Kuyasa and other schools is the pace of teaching.

“At regular schools, they are too fast,” Steyn explains. “Teachers are rushing to finish the syllabus. They’ll go at the pace of the faster kids and leave behind those who don’t understand.

But some children are slower learners and at Kuyasa, the most important thing for a teacher to do is to build a child’s confidence.

“They go with the child until he or she can understand. At Kuyasa, we don’t rush. We treat each child as an individual. Even among the children who come to the school, they are not the same: they have different levels of ability. They are not mad, but they function at a lower level.”

Using a special curriculum designed for disabled learners, the school starts from Grade R to Grade 5, and enrols children from age five to 18, with children differentiated according to their ages.

“If the child cannot understand anything, we start them from the most basic level, regardless of their age.”

Several of the Kuyasa children play for the Province in the disabled cricket team.

“They might be not good at academic work, but then they shine at national games,” Steyn said.

Another child who at first didn’t want to be seen in the school bus turned out to be the best athlete in the school.

“The community should stop judging these kids and putting them in one basket,” Steyn said. “When they are at mainstream schools, their talent is overshadowed by the others, but when they come to Kuyasa, they shine.

“At normal schools, teachers fail to spot special talents and start to reject them because they’re not performing well in class. When the kids settle in at Kuyasa, their talent comes out.”

Kuyasa pupils do sewing, consumer studies, beauty and nail care and administration, cooking and computer literacy. The school is one of a number across all the provinces, all with the same curriculum.

“It’s the community who make children useless,” Steyn said. “The community should allow the kids to come to Kuyasa, because if they come to school, they will learn a lot.

One of the parents of a former Kuyasa learner described his child’s journey.

“My child was in a mainstream school but he wasn’t coping,” the parent said.

The child was referred to Kuyasa Special School.

“He didn’t want to come to Kuyasa because of the other learners teasing him in the community. His mother convinced him it was the best for him. He arrived at school not being able to read nor write. He left being able to read. He gained self confidence. He excelled in sport and now represents the Eastern Province in the Intellectually Impaired Cricket and Athletics teams.”

“When it’s noticed that a child does not perform well academically, there are options for different learning streams.”

“We South Africans all want our children to go to varsity – but we must not neglect artisan skills.”

Van Vuuren said there were parents who were determined their children should remain at academic-focused schools – even when they made no progress there.

“You as the parents are the ones who’ve failed in that case to give the child [access to]artisan skills,” Van Vuuren said. “Because the child stays at school and fails matric, he or she goes out into the community without skills.”

If a child has practical aptitude, the Education Department will nurture that.

“When he leaves, at least he will have a skill and can enrol in a technical college.”

Van Vuuren does not agree with the word disabled, when it comes to aptitude. She believes everyone can contribute in some way to society.

“We can’t choose in life how we are born and what kind of children we are going to be,” Van Vuuren said. “It is God who creates us differently.

“All we need is ubuntu (humanity) among ourselves and to accept these kids in our community, because it could be one of your family members. Let us love one another as a community. Parents who have children who don’t cope well at school – they must take them to Kuyasa for skills training.”

Previous ArticleRecord low rainfalls for winter
Next Article Owning her ability, on and off a horse