Save water and the toads! 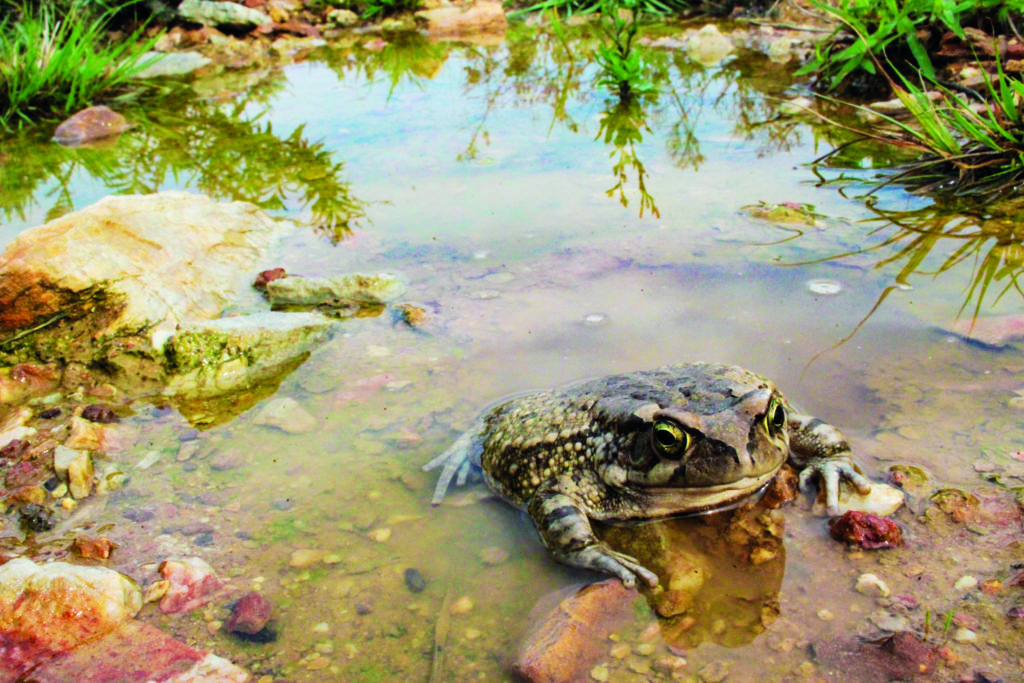 WATER VIGILANCE
We should all be aware by now that at present Makhanda (Grahamstown) is almost completely reliant on the Glen Melville Dam for its domestic water supply. This water is ‘imported’ from the Orange River via the Fish River– and we are extremely fortunate to have access to this pipeline. However, we should not be lulled into thinking that we will always have access to this supply. Currently the Gariep Dam is almost 90% full, so the quotas can be honoured. But bearing in mind that we are at the end of the line of the Orange River water users, what if the regions supplying the Gariep Dam were to experience drought conditions at the same time as Makhanda? Apparently, the Katse Dam, which stores water from the source of the Orange River, is only 27% full. Given that there is uncertainty as to when we can expect the current drought to be broken, we all need to keep on doing everything we can, individually in our homes, in our places of work, and in our management of water supply, to be as efficient and careful as possible. (Thanks to Tally Palmer for the info.)

KEEPING THE SPRING CLEAN
A group of postgrads from Rhodes University’s Department of Environmental Science recently took it upon themselves to clean up the area around the spring on the Port Alfred road. In recent years with the escalation of use of the spring, so the amount of litter has increased.

The recent cleanup was not the first – various environmentally concerned groups have done their bit to keep the area clean through the years. And last year Rotoract installed two cement bins that are often full to overflowing. This time round the students collected 27 black bags of garbage! Not just the superficial trash but also digging out deeply embedded rubbish. The group debated a number of different solutions that could be used to solve the problem. Everything from signs declaring “No Dumping” to big municipal garbage bins was discussed. But they realised that ultimately the problem will only be solved when Makhanda residents take responsibility for keeping their water source and the area around it clean. Littering is a worldwide problem and we all need to become aware of its impact on all our natural habitats, particularly on water sources. (Thanks to Kathy Cassidy for the info.)

MIND THE TOADS
Gowie Dam is a popular breeding ground for multiple frog species, especially toads, as it provides good sanctuary and food. During the warmer months, from September through January, Makhanda frogs begin chirping away in search of mates. Unlike most frogs, which tend to stay close to the water, toads are more robust enabling them to move farther distances from water, usually on warm, wet nights. Unfortunately,
Wincanton and Selworthy roads, which border Gowie Dam, intersect the paths of toads, putting them in conflict with motorists who struggle to see them, even though they are relatively large. To prevent the unnecessary deaths of our indigenous toad species, WESSA Grahamstown Branch is planning to erect signage notifying the public about the presence of wildlife on the roads, in the hopes that this will reduce toad fatalities.

MAKHANDA YOUTH SHARE STORIES OF THEIR CITY FOR DOCUMENTARY FILM

Pupils from Seventh Day Adventist School, Ntsika High School and a group of out-of-school youth were hosted by Rhodes University’s Environmental Learning Research Centre (ELRC) in a workshop with international film director, Amanda Blue. The workshop was the springboard for a documentary on the lives, well-being and environmental concerns of Makhanda youth. Youths each wrote a letter to their city with inspiration from Amanda who shared some of her touching and thought-provoking documentaries on the complexities of the human experience. Inspired by the letters, participants were invited to share their stories on camera and, over five days, the youth took the film crew on multiple personal journeys sharing Makhanda’s many wonderful and challenging facets.

The documentary is being made alongside an international study led by the Centre for Understanding of Sustainable Prosperity at the University of Surrey and funded by the UK’s Economic and Social Research Council. The ELRC is one of six institutions across five continents partnering in this project – eliciting and sharing the stories of youth from seven sister cities in Christchurch, Delhi, Dhaka, London, Makhanda, São Paulo and Yokohama. (Thanks to Ingrid Schudel for the article.)