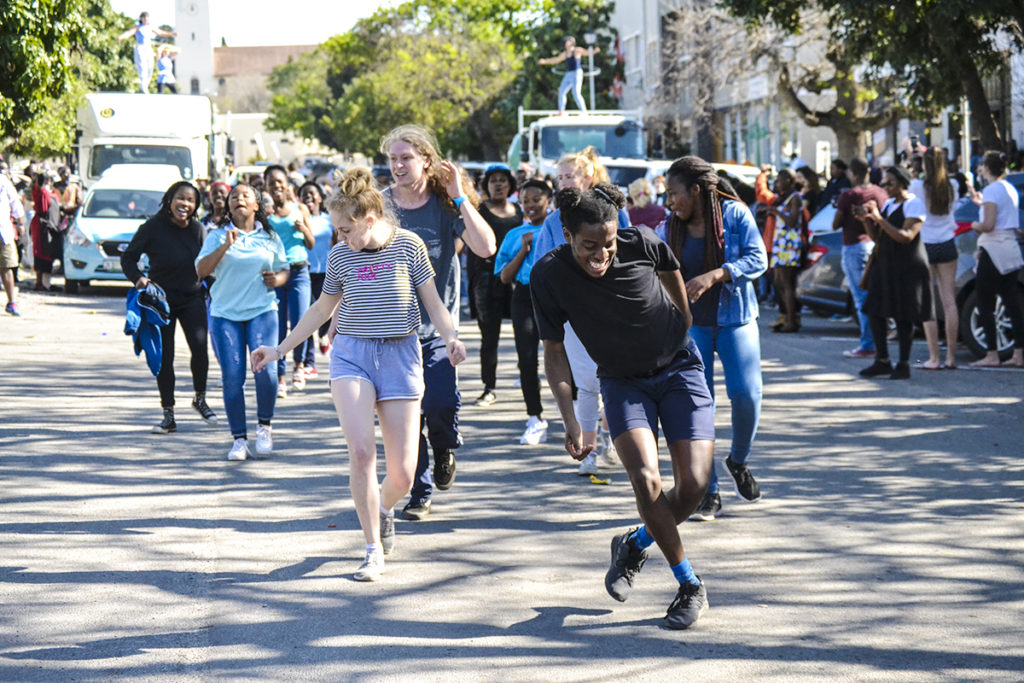 The locals were beaming with joy at the sight of a spectacle rare to the City of Saints. On 22 August 2019, students and members of various organisations brought High Street to a standstill with a flash mob to call for change and awareness. Makhanda (formerly known as Grahamstown) has been recognised as a creative hub for decades. In as much as the creativity is constantly bubbling seeing it explode has been rare and nothing ruins a glistening bubble experience like the lack of water.

The Idea of a flash mob was initiated by Dr Heike Gehring, a drama lecturer, theatre maker, director and actress. Gehring who is also the Head of the Drama Department asked her colleague Athina Vahla a choreographer, lecturer and associate researcher for the Rhodes University Drama Department to initiate a project that would take performance out of the department and on to the streets.

Vahla’s passion for her craft resonates through her even in the calmest of spaces. She spoke about how as far as she was concerned, the flash mob needed to serve a greater purpose.

“Rather than it being a flash mob that is a surprise, it should be a mini event that brought different flash mobs together.” The flash mob was an experimental project, a first for the city and all the participants. Valha added that the final performance was not a traditional flash mob, this being a quick performance that appears and disappears. Rather it ended up as a form of an activation for different groups to raise awareness about the drought.

At the core of the spectacle was a merging of different art forms, from dramatic arts to dance to praise singing. Participants expressed their gratitude for the platform the event created. A couple of the first-year drama students among the dancers spoke about how their involvement changed how they saw the possibilities of their passions and their careers.

Bella Pinetown mentioned how there was a clear vision from the first practice. She spoke on how learning the choreography was stressful at first; however, with time the group gained confidence which made the performance a success. Denzel Nyathi expressed how the flash mob ignited his passion for choreography and physical movement, and how it aligned well with him as a performer.

“If people want something, want to do something, they need to simply do it and be prepared to fail in order for them to succeed. It’s about thinking beyond about what is success and failure. Rather what is life and what could life give, in this instance, hopefully water,” Vahla said.

Supper and sounds at The Black Power Station