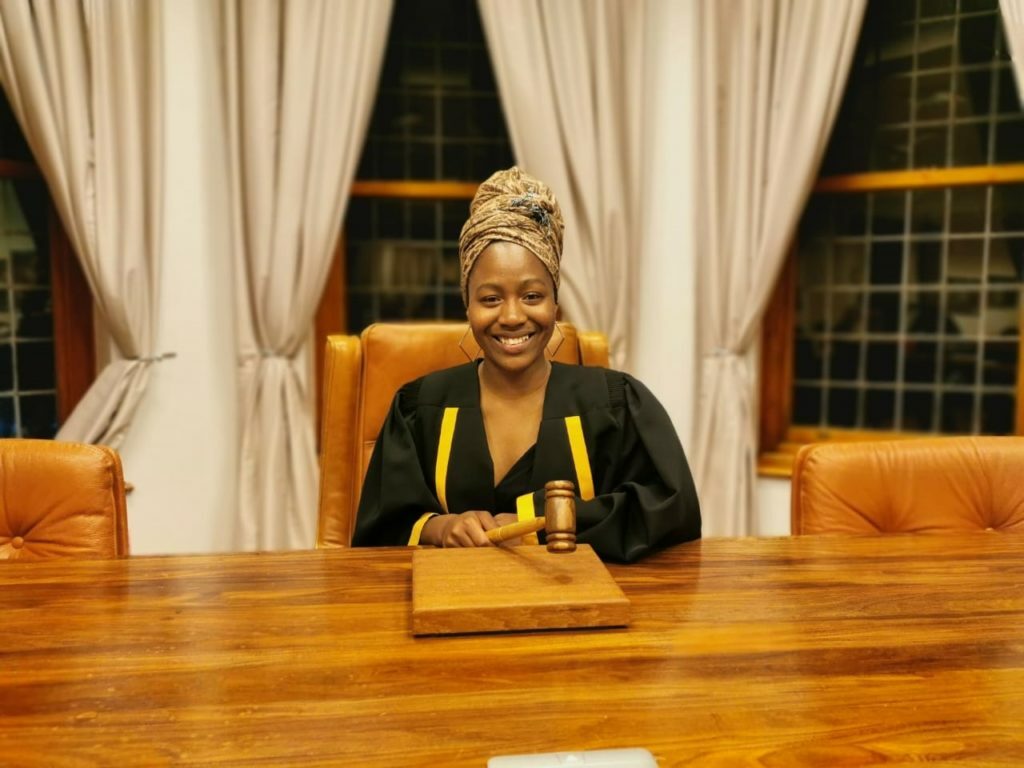 Rhodes University students have entrusted 23 year-old Pharmacy student, Katlego Mphahlele, with the role of leading the 2020 Student Representative Council (SRC). Mphahlele was inaugurated together with her 14 SRC executive members at Eden Grove Red lecture theatre on Friday. For the first time in the history of SRC elections in the University, out of the 15 SRC members, 13 are women.

Mphahlele said it had always been a dream for her to lead the SRC, as she has occupied various leadership positions since her arrival at the University in 2015. In 2016, she was elected a Sport Representative of Adelaide Tambo House and in 2017, she became the House Senior. At the beginning of this year, during by-elections for Sports and Societies SRC executive, she ascended to the SRC. “When I was elected into the executive this year, I was even more motivated to work hard to fulfil my presidential aspirations. I have always had the best interests of the students at heart and have always been working to make the environment more conducive and accommodating for the students. There is no better way to master all these than being the President of the SRC,” she said.

The newly-elected SRC President acknowledged the pressure that comes with the position, especially as a female student leader, but said she was equal to the task. She said: “Considering the challenges that have been faced by female students at universities, I know that people will be eagerly anticipating our impact in fighting those injustices.” She applauded the University for appointing black women into prominent positions and for the recently approved Sexual Offences Policy for Students and said the University was taking positive steps towards transformation. “It is evident that the demographics are completely changing and I am excited that students’ inputs are considered in the transformation agenda of the University,” she added.

Mphahlele’s vision is to take the SRC to new heights and reevaluate and implement programmes that have not been functional in the past. She said her Council would start planning for their tenure as soon as possible, because failure to plan is equal to a plan to fail. Outgoing SRC President, Samkelo Mngadi congratulated Mphahlele and described the results as “a good surprise”. He said: “We are pleased to see women taking up positions of leadership in the SRC because it fulfills our vision as the current Council. I know that Kadlego is capable of taking the baton from me and lead the SRC forward. In this role, humility is key and students must always remain at the center of everything she does.”

Rhodes University Vice Chancellor, Dr Sizwe Mabizela congratulated the student body for electing leaders of outstanding caliber to serve the interests of the students and the University in 2020. He said: “We are looking forward to their contribution in our efforts to maintain a safe, secure, affirming, nurturing and positive institutional environment free of racism, sexism, homophobia, transphobia and other forms of bigotry and intolerances. Katlego and her executive have much to contribute in ridding our community of the scourge of sexual and psychological violence including rape, sexual abuse, sexual predatory conduct, misogynistic attitudes and all such. I am confident that, working with the new SRC in 2020, we will advance our objective of making Rhodes University a place in which everyone is free to be; a place in which every student and staff member is able to grow, develop, flourish and realise their full potential.”

Mphahlele is from Ga-Mphahlele village in Limpopo. She completed Grade 12 at S.J. Van der Merwe Technical High School in 2014. She completed her Bachelor of Pharmacy degree at Rhodes University last year and is currently doing her Masters.