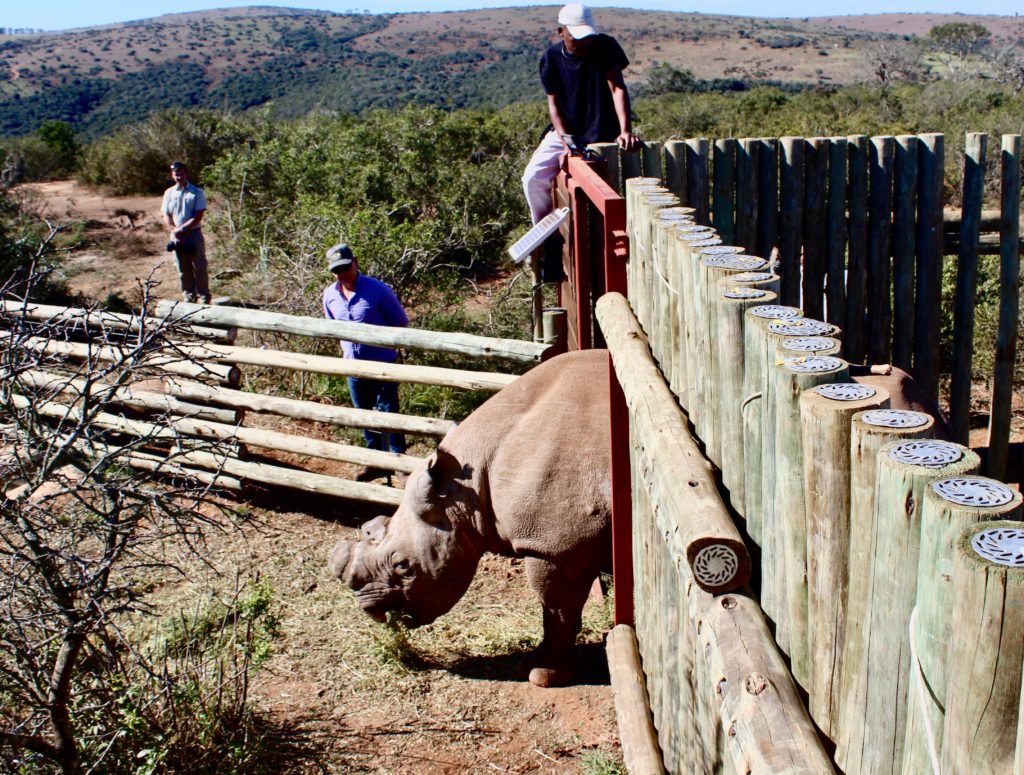 Earlier this year, UK based organisation, The White Lion Foundation, launched an exciting campaign to help Munu, a visually-impaired male black rhino, relocate to his new forever home here in the Eastern Cape. Munu is a Southwestern Black Rhino, and records show that there are fewer than 260 of these rhino left in South Africa.

In a press release, the Foundation wrote; “Munu was tragically blinded in territorial fighting and can no longer survive in the wild. This ambitious project to assist this ‘special needs’ rhino has become the first major mission for the new global wildlife charity, The White Lion Foundation.”

Munu was found wandering around in circles on a South African reserve. He was then placed in a temporary holding boma which allowed rangers and veterinarians to discover his visual impairment. In the wild, Munu could have been lion food, but thanks to the Foundation, this special rhino was gifted with a new life and and an extreme home makeover.

Grocott’s Mail has followed Munu’s journey for the past two months, and is proud to announce that Munu is happy and healthy in his new luxury home at Founders Lodge, part of the Mantis Group. Our reporter was lucky enough to tour Munu’s new home before his arrival, and was impressed, to say the least, with the amenities of the new facility.

Eastern Cape local, Foundation Director and rhino expert, Brett Barlow, was at the forefront of the design and construction of Munu’s new digs. It was a task Barlow had never taken on before, in fact, no one had. Building the equivalent of a Barbie dream house for one of South Africa’s most eligible and dangerous animal bachelors, was not going to be easy.

“We are trying to build the ideal home for him,” said Barlow. “He will tell us what he needs, but in the interim, we are trying to determine what we think he will need.”

The design of Munu’s new home is exactly like his old boma, except with a few added extras – plus an impressive outdoor space! Because Munu is blind, Barlow had to make sure that things would be familiar to him in his new home: the doorways, feeding platform, sleeping area and water point in the new facility are all located in the same place as the old.

The luxury begins perhaps with the addition of an outside browsing area (this is the outdoor space we mentioned) for Munu to explore. The outdoor area is designed specifically with Munu’s behaviour in mind. Barlow works alongside Munu, and knows him well-enough to understand that he moves in a counter clockwise direction. With this in mind, the area is designed so that Munu will begin and end his browsing in the same place, without encountering any potentially hazardous obstacles.

This area can be expanded to grow with Munu’s wants and needs, and the second ‘tier’ of this outdoor entertainment area even has a dirt patch ready to be made into Munu’s personal mud spa! Don’t get too excited – this might be the most exclusive spa in the world. Munu’s new dream home is well-equipped with 24 hour security cameras, solar panels, a 24 hour armed security guard, electric fence and a radio. Munu likes listening to AlgoaFM, and is probably the station’s biggest – or LARGEST – fan!

Munu is 20 years old, and was found roaming around in circles on a South African reserve, only for rangers to discover that he could not see. “He was subsequently diagnosed to have detached retinas, presumably from territorial fights in the Reserve,” wrote the Foundation.

“The bull is one of the critically endangered south-western sub-species of black rhino. Overall there were 254 at the last official count of south western black rhinos left alive in South Africa – of which only 80 males are capable of breeding.”

Black rhino can live upwards of 45 years, and at the ripe age of 20, Munu has the potential to father many more of his rare kind.

“I take the words of Ian Player,” Barlow told Grocott’s Mail. “Every rhino matters, which is why we are doing this.”

Shirley Galligan, Foundation Director, said, “Helping Munu throws a spotlight on what is happening to rhino. He is a rare and magnificent ambassador for the species, and we will do everything in our power to look after him. We are offering him a lifetime of care that he deserves.”

Reportedly 50 percent of male black rhino and 30 percent of females are killed in the wild due to territorial battles.

Future plans include introducing Munu to a suitable female black rhino in hopes of breeding and further conserving the species. Offspring would then be donated to the South African National Parks (SANparks). Although Munu is a very handsome and very eligible bachelor, he unfortunately won’t make the cut for South Africa’s next season of the popular television show, The Bachelor.

Last week Monday 5 August, our reporter attended Munu’s housewarming party at Founders Lodge, and witnessed Munu’s first steps into his new outdoor area. The important event was well-attended by members of the Foundation, including Adrian Gardiner, Galligan, Barlow, wildlife vet Dr John Knight, as well as conservation staff from nearby reserves and Munu’s friends and family from neighbouring farms.

“It’s fitting for Munu to start his new life at Founders,” said Barlow, keeping the lodge’s vision “where it all begins”, in mind.  “It was this vision of Adrian’s [Gardiner], that commercial and sustainable tourism all began from this area and with this vision.”

This is only the beginning of Munu’s story, said Galligan.

“This story is a wonderful collaboration between like-minded professionals who have a passion and commitment to the conservation of rhino. We want to thank everyone for their ongoing support for this humane and ground-breaking project,” she said.

The White Lion Foundation is currently looking for donations to help with Munu’s care, and more information can be found online at https://thewhitelion.foundation/project/munu-rhino-appeal/

Munu’s personal website packed with photos and a short video of Munu’s relocation to the new facility can also be found at http://www.munutherhino.org