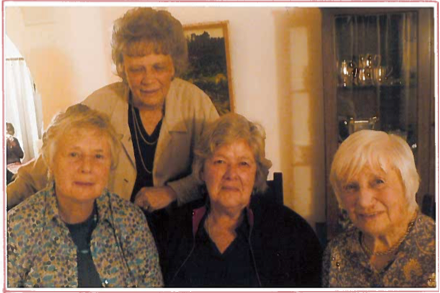 For 53 years, a group of Makhanda women has been gathering in the comfort of each other’s lounges on the third Thursday of every month. They have presented around 525 essays so far on topics ranging from ‘Icons and Iconoclasts’, ‘The History of Glazing’ to ‘The Ukulele of Hawaii’.

The ‘Third Thursday Essay Club of Grahamstown’ was founded in 1967 by Rosemary Smith, Betty Davenport, and Shirley Maclennan. It aims to bring intellectual stimulation to an invitation-only group of women, ranging in age from early forties to late eighties.

“Controversial as it may be, to have only women present can have a rather freeing effect,” says Third Thursday member, Undine Weber. The group was originally composed of anti-apartheid campaigners such as ex-regional director of the Black Sash, Rosemary Smith, who used the meetings as a haven from the chaos of the outside world.

The club was modelled on a similar society named ‘The Friends in Council’ which Smith attended in Lawrence, Kansas. The members of Third Thursday are academics, ex-academics, social workers, writers, musicians, and teachers, to name a few. Ten meetings are held per year, at which a member gives a talk revolving around the selected theme for the year. Many of these talks include photos, video, slideshows or musical performances. A discussion usually follows, together with a cup of tea and cake.

Sue Hummel, a former headmistress of DSG, joined Third Thursday over 40 years ago.

“When I was still working, I found the challenge of reading and preparing a topic for Third Thursday such a wonderful distraction because it took my mind away from earning a living and teaching the school syllabus!” she says.

Not only does the group provide a platform for discussion and debate, but friendship too. It is only natural that when you put a group of like-minded women together, a bond is formed.

“You build up a special rapport with one another when you have this contact every month for many years,” Hummel adds, with a smile.

Not only do these women relish critical thinking and debate, but an occasional picnic is enjoyed, too. From 2000 till 2011, the group travelled to picnics hosted by member, Gill Pringle, on her farm in Bedford. The locations varied from grassy rivers banks to mountain tops.

The club’s latest addition is Undine Weber, Head of German Studies at Rhodes University. When asked about being the ‘baby’ of the group, Weber noted that she feels rather privileged.

“It’s hilarious considering that I am not really young myself! But it is nice to be taken under the other women’s wings every now and then,” she says.

Although Weber has only been a member for the past three years, she thoroughly enjoys their regular meetings. “For those couple hours per month we are not defined by the roles we play in life; it does not matter whether we have a partner or not, children or not, go out to work or are homemakers or retired. We just share some interesting information and as much of ourselves as we are comfortable with.”

Goodbyes are never easy, especially with this group. In the past, people have usually only withdrawn because they left town. “One lady said she would leave because she was over-committed at work, but then changed her mind because she could not bear to leave!” said Hummel. A few members, such as Gill Pringle and Sue Hummel, live out of town. But, this does not stop them. “Most of us have been members for a long time so I would hate to leave this group – that is why I come in,” says Hummel.

In 2017, the late Priscilla Hall who was described as a ‘stalwart of the club from the very early days’, withdrew from the group due to illness. In her goodbye, she wrote: “After all these happy decades in Third Thursday I have to bow out now. I joined in the 60s… and I realise this group has been my main social marriage in Grahamstown – a steady bond with lots of splendid people through the years, and such rich ideas to share. It’s been wonderful. Thanks so much for it all.”

Groups such as these are few and far between. Many members of ‘Third Thursday’ have never been a part of or let alone heard of a group such as theirs. Many people may not be eager to prepare an essay every two years or even attend a meeting of thought-provoking discussion every three weeks, but these women certainly are.

Through time, many things change. This group has been through it all: the fight against apartheid, the emergence of South Africa’s new democracy, the technological revolution and the current water crisis in Makhanda. However, their constant has and will always be the ‘Third Thursday Essay Club’.