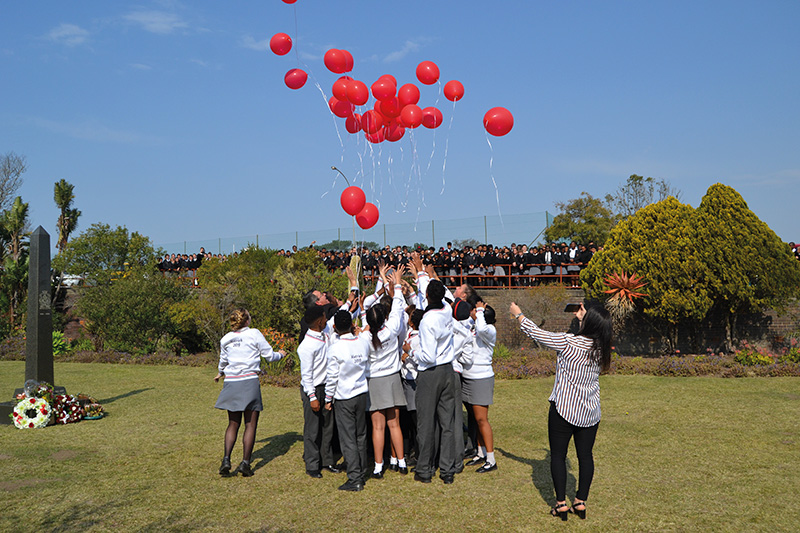 Red balloons floated above the hills of Makhanda (Grahamstown) carrying the hopes of the 2019 PJ Olivier Matric Class on Friday, August 2, in a ceremony that dated back to the school's founding in 1956. Photo: Gemma Ritchie

Red balloons floated above the hills of Makhanda (Grahamstown) carrying the hopes of the 2019 PJ Olivier Matric Class on Friday, August 2, in a ceremony that dated back to the school’s founding in 1956.

The ceremony gave matric pupils a chance to say farewell to the school before they begin to prepare for their preliminary exams in three weeks. For former pupils dating back to the school’s founding, it was a chance to remember their peers who have passed away.

He hoped to study electrical engineering next year, he told Grocott’s Mail. However, the message he attached to his balloon asked that he would be happy, successful and learn new things.

Matric pupil Amy-leigh van der Walt wrote asked she would make her parents proud with her final year results and find work she was passionate about.

A former pupil from the class of 1979 and guest speaker, Christiaan Hattingh, asked the pupils to focus and work hard for the exams. He also told the class not to fear when they enter the working world and have to start from the beginning. “It’s all part of life,” he explained as he shared his growth from working towards becoming a professional provincial rugby player to becoming a businessman in Australia.

“People will help you,” Hattingh told the matric class. “All you have to do is ask for help.”

With the alumni present at the ceremony, Principal Joubert Retief expressed his gratitude for the talent of the pupils who had participated in the Eisteddfod and the Eskom Expo for young scientists competition.

“You spend 12 years at school,” he told the audience “and you will be surprised at how quickly time passes when you leave. Lifelong friendships are formed here. Some even find their future spouse,” Retief told the giggling pupils.

Most importantly, a former pupil and teacher, Marilee Roux told the matrics that their years spent at PJ Olivier had prepared them for life outside of school, and it was time for them to take the next step in their journey.