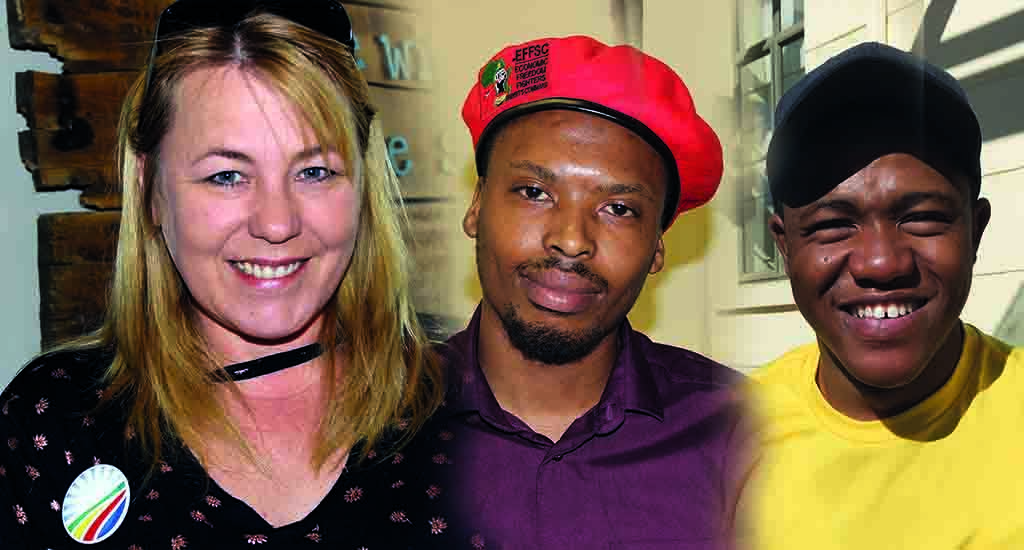 Political posters around Rhodes University campus urge local voters to keep their ward DA. The party won Ward 12 in the last municipal elections in 2016, but the seat became vacant when Councillor, Darryn Brian Holm, announced his resignation. The Independent Electoral Commission (IEC) then determined that a by-election will be held on August 7 to find his replacement.

The campaign currently under way to decide who will take up the Ward 12 seat in the Makana Council is a closely fought race. The three candidates contesting the by-election next Wednesday are Mzobanzi Nkwentsha for the ANC, Angi Jones for the DA and Simphiwe Mbonda for the EFF.

Running a political campaign in Ward 12 is quite different to most other wards as it covers mostly Rhodes University where students and staff make up the majority of voters. Most students only consider Makana a temporary home and are often not fully committed to the future of the municipal area.

The three candidates have very different backgrounds yet they all have a vested interest in education and regularly take part in activities at Rhodes University. Jones lectures in the Education Department, while Mbonda and Nkwentsha are both students.

Jones worked for many years in the Eastern Cape Education department so she knows its inner workings. But she is only launching her political career with the current campaign.

She says, “I wanna make a difference and I don’t see anyone else standing up and saying ‘I have the energy, and the integrity and the passion to do something’.”

Nkwentsha has experience in student politics as he joined the South African Students’ Congress (Sasco) in his first year at Rhodes, and after only two years he became head of the organisation. In his role at Sasco, he says the organisation often works with the ANC Youth League (ANCYL) therefore it is not surprising that he should run for office as an ANC candidate.

He aims to draw the university and the town closer together. He says, “The time has now come for Rhodes products to be absorbed into the greater Grahamstown economic community – in the sense that there’s a brain drain in Makana. Students come and go and do not necessarily stay so that they can have an impact and offer their skills to the growth of the municipality.”

Nkwentsha had praise for the Rhodes community engagement office, but said that more needs to be done.

He identified the high rentals for accommodation as a serious problem that needs to be addressed. If elected to Council he will propose a policy to regulate rentals so that they are more affordable for students.

Mbonda, like all EFF activists known as ‘Fighter’, is a true local. He was born in Grahamstown, went to Archie Mbolekwa Primary school and did his secondary schooling at Nombulelo before enrolling at Rhodes University.

He says his campaign is “based on conscientising students about the problems that are facing the municipality at large and also especially this ward”. These include issues around the reliable supply of water, sewage leaks and the potholed streets.

Mbonda devotes his campaigning to making students aware of the role the EFF plays in the national scene – but he also tells them what his party can do at the local level. He has been targeting young people with a view to strengthening the EFF identity.

All three candidates have highlighted the importance of campus security in their campaigns. Jones says she wants the students to feel safe, as there is a lot of activity on campus at night but only minimal security.

Mbonda also acknowledged the precarious security situation in the ward, apportioning blame to the outgoing Councillor, “He has failed in some instances, in terms of safety in the University. You find out that there are students who are suffering, who are being abused, who are rape victims in this university, and the DA has done nothing about that”.

He recalled the case of Khensani Maseko, a student who committed suicide last year, and asked why there was no follow up to the incident. Mbonda said, “We need feedback from the Councillor because the Councillor is the leader of the community.”

Mbonda made a commitment to guarantee the safety and security of students. Apathy about political issues among young people is an important concern in a ward where the average age is only 20. Jones noted that a lot of young people haven’t bothered to register. She says that many of them are just fed up because they believe that voting does not make any difference – “so why bother?”

She said the older generation is partly to blame for this apathy because many of the young people she approached on campus had little knowledge about the by-election. She heard many times, “What is a ward? What is a by-election? How does that work?”

She suggested that high schools should include voter education in school curricula. Referring to the dire water situation in Makana, Jones said, “It pains me to see young leaders of tomorrow, walking around carrying bottles of water. I’m going to campaign for clean water on campus.”

As one student remarked, “Any water would be fine – there’s only so much you can do with a wet wipe.”