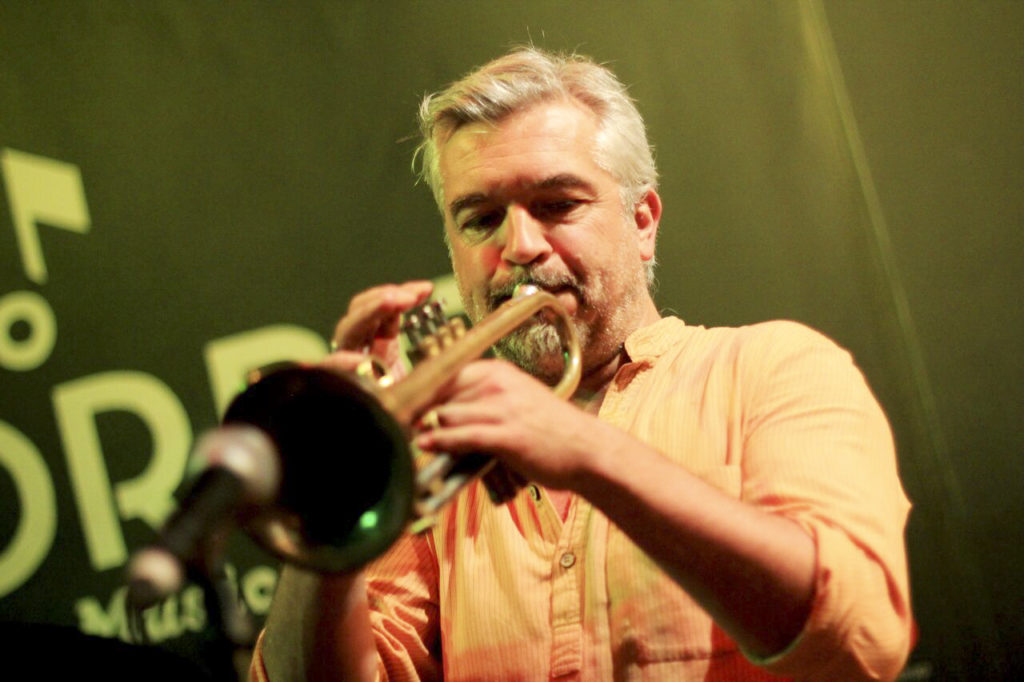 The SAMA award-winning 17-piece ZAR Jazz Orchestra, founded and directed by trumpeter Marcus Wyatt brings together some of the best jazz players across the country. Photo: SUpplied by NAF

Collaborations are a key standout feature of festivals allowing for unique pairings that might not otherwise be seen. The Standard Bank Jazz Festival in Makhanda (formerly Grahamstown) is one of the few in the country that has always encouraged the idea of collaborations giving local artists a platform to play with international like-minded musicians.

This year’s 32nd festival running from 27 June – 7 July, boasts plenty of diverse players from across the world coming together for this purpose.

One of the main highlights of the festival annually is the anticipation around exciting collaborations in the Standard Bank Young Artist’s chosen projects. This year, award-winner for jazz, trumpeter Mandla Mlangeni presents the Amandla Freedom Ensemble – Born To Be Black: A Celebration of the Conscious Soul – a super-band of nine musicians skilled in the art of improvisation, intended to be an ‘odyssey of musical meditation and healing’. Mlangeni’s peers form the foundation of the group, helped along by respected
mentors drummer Louis Moholo-Moholo, saxophonist Salim Washington and pianist Andile Yenana.

From China comes the acclaimed composer and vocalist Coco Zhao whose sound connects the unique cross-section between Chinese traditional music, western classical music and jazz. At the festival, he presents compositions from his ‘Dream Situation’ album, a project of rearranged 1920 – 1930’s traditional Shanghai songs reworked into a contemporary jazz framework, with the help of his touring pianist Huang Juanyi. Joining him is special guest vocalist Asanda Mqiki, bassist Romy Brauteseth and saxophonist Mthunzi Mvubu.

Looking to draw connections between American jazz and its African roots, New York drummer Jeff “Siege” Siegel (played with Ron Carter, Kenny Burrell, Ravi Coltrane) brings his Sextet to our shores with his latest project, King of the Xhosa intended to celebrate these roots and exchanges that have shaped the jazz tradition. Joining him is iconic South African trumpeter Feya Faku to respond and add to this conversation.

The SAMA award-winning 17-piece ZAR Jazz Orchestra, founded and directed by trumpeter Marcus Wyatt brings together some of the best jazz players across the country.

Wyatt, no stranger to the big ensemble format, has chosen these top musicians who weave in elements of traditional South African jazz with contemporary approaches. Among them are saxophonist Sisonke Xonti, pianist Bokani Dyer, drummer Marlon Witbooi and Swiss trombonist Andreas Tschopp (Skyjack).

On the subject of big ensembles, an annual signature feature of the festival is the Big Band, an all-star collaboration between local and international musicians, conducted by a different musician each year. This year showcases the Funk Big Band, presented by Swedish jazz legend, trombonist and composer Nils Landgren. He has been invited to Makhanda to perform for over a decade, and his accolades include featuring on over 500 recordings. The mega 18-piece band includes saxophonist Shannon Mowday, bassist Shaun Johannes and Swedish trumpeter Fredrik Noren.

Expanding to the rest of Africa, Nairobi Horns is a project that brings together musicians committed to building a sound around horns in African and contemporary music. Initially conceived off as a commercial horn section working on TV shows, the group has since grown into a live act inspired by jazz roots blending Kenyan folk with popular influences. The festival’s performance combines the four Kenyans with a strong rhythm section from South Africa, including local drummer Sphelelo Mazibuko.

Wrapping up the collaborations, is maestri musicista (master musician), Susanna Stivali, one of the best known Italian jazz singers of her generation. Aside from being an incredible vocalist, Stivali is also the artistic director of the Incontri Jazz Festival, a festival held in different archaeological locations across the centre of Italy. Her festival performance selects compositions from Italy, Brazil, America and South Africa, and features saxophonist Mike Rossi on sax among others.

For those keen on continuing late-night listening, the Standard Bank Jazz &amp; Blues Café hosts many of the local and international musicians featured at the festival for collaborative performances and jam sessions to wrap up the daily performances.

In terms of the drought Makhanda is experiencing, festival-goers have an opportunity to contribute by helping to secure water tanks for the Amanzi Yimpilo Project. Standard Bank has committed to support the project based in Makhanda, which looks after Day Care Centres and is responsible for roughly 1200 children from newborns up to 5-years-old.  The campaign is seeking donations from the public, in order to provide a sustainable source of clean water for drinking, basic hygiene (washing hands and brushing teeth) and cooking.

Jazz lovers can get their tickets from www.nationalartsfestival.co.za