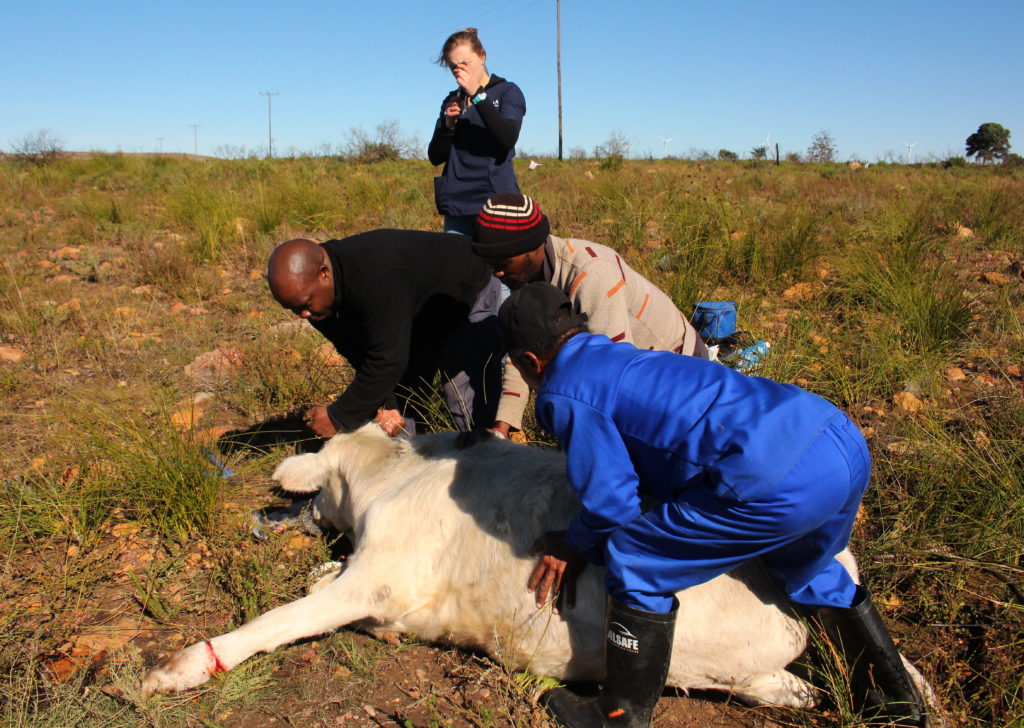 A beautiful white calf has been given a second chance after being freed from a nasty snare this past Sunday 21 July. Makhanda (Grahamstown) resident Lynette Rudman was out birding near the army base when she came across the injured calf. Thanks to Ikhala Veterinary Clinic and the SPCA, this precious youngster is back on its feet.

“I was out birding at the old golf course, when I saw this white calf with an extremely tight snare around its front left leg.”, said Rudman. “The leg was very swollen below the snare which had cut deep into its flesh. It hobbled around and would keep sitting down and licking the wound.”
Rudman phoned the SPCA immediately and Maloli Dingana and his team arrived quickly after.
“After seeing the size of the calf, they decided it would to impossible to catch and pin down. So they went back to the SPCA, which was having its open day at the time, and arranged for the manager to contact Ikhala vets to come and dart it.”, said Rudman.
Dr Annie Mears from Ikhala assisted SPCA staff in darting, sedating and treating the calf.
Mears said that on arrival at the scene, the calf was mobile but severely lame and could not be caught. “We decided that darting the calf would be necessary to fully assess and treat the wound. Thankfully, a highly dedicated team of staff were on hand from the SPCA to help reposition the calf and remove the snare.”
Rudman said that Mears worked quickly and ensured that the animal was fully sedated and calm. Dingana had to use wire cutters to remove the snare before Mears could clean the wound with Dingana’s help.
“[Mears] then gave it an anti-inflammatory shot, as well as antibiotic and painkiller shots. She then administered the antidote and it was on its feet in no time without a limp because the painkiller had kicked in.”, Rudman added.
“Fortunately, the snare had only severed superficial skin and muscle and had not yet cut into tendon or bone. After attending to the wound and administering medications the calf was woken up to rejoin the herd. We expect he will make a full recovery.”, said Mears.
Days following the rescue, the calf was spotted confidently leading his herd near Burnt Kraal.
The use of snares is illegal in South Africa, but many Makhanda residents and their animal friends have become tangled up in these dangerous traps. Snares have been reported in Featherstone Kloof and Mountain Drive, as well as in the Gowie Valley.
“Over the last few months we had seen several snare injuries in both livestock and pets. We urge residents to be vigilant of snares when using communal land and report them to authorities.”, Mears stated.
Grocott’s Mail thanks Ikhala, the SPCA and vigilant residents for helping to keep every member of our community safe and healthy, including those with more than two legs.
Previous ArticleTaxi owners organise Youth skills training
Next Article Monastery converts to outdoor school