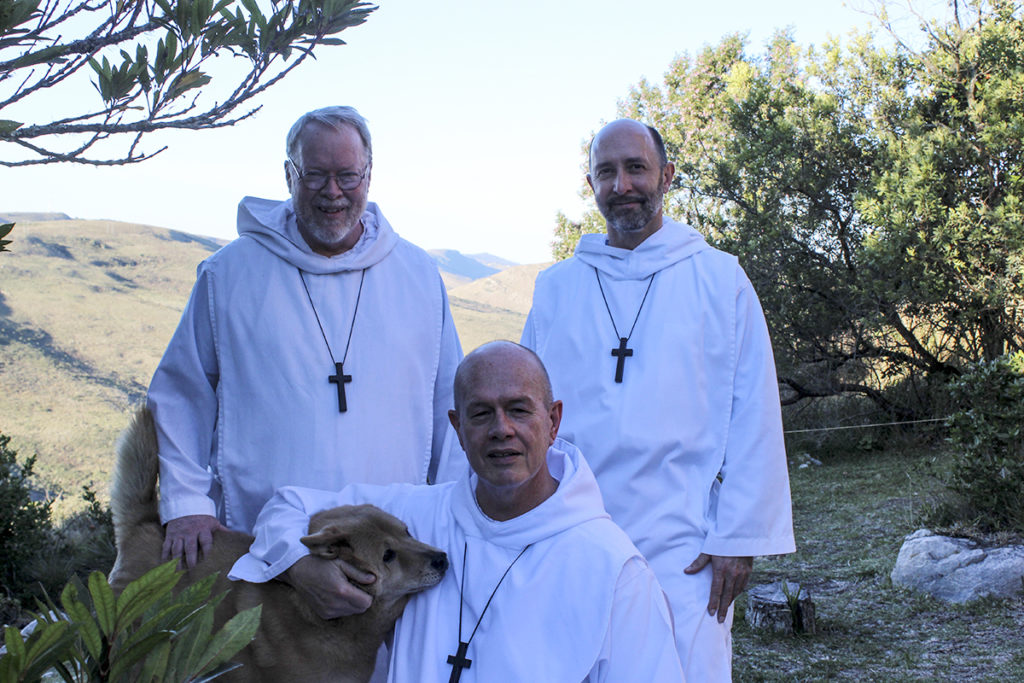 The Benedictine monks at the Maria Umama weThemba Monastery speak to Grocott’s Mail as they prepare to hand over an oasis of contemplation and action that’s won its way into the hearts of the community.

The Benedictine Brothers remaining at the Maria Umama weThemba Monastery will be moving to a new monastery, St Benedict’s Priory, at Volmoed near Hermanus in the Western Cape at the end of next month. They represent an extraordinary legacy to Makhanda that is not only a “listening” space but the gift of two valuable learning spaces.

The Benedictine Community at Maria Umama weThemba couldn’t be more pleased: first, that education remains at the heart of the venture and second, that DSG, with whom they have a long-standing relationship, will be stewarding the property.

“We’re very glad that DSG will be using these facilities,” says the Community’s Prior, Brother Daniel Ludik. “This Community has a long-standing relationship with them.”

Joining the conversation in the Guest House lounge are the other two Brothers who’ve remained at Maria Umama weThemba, Novice Master Roger Stewart and Associates Director Scott Wesley Borden. Twenty two years after the Community established itself at the Hillandale retreat 8km from Makhanda on the Highlands Road, the three will move to Volmoed at the end of next month.

The guesthouse is still named Hillandale, in honour of the nuns of the Community of the Resurrection who handed it over to the Benedictines under the Order of the Holy Cross.

We did not want to recreate the mistakes of previous waves of colonial outreach.

The Order has its founding centre in West Park, New York, US with a second house in Toronto, Ontario. The Maria Umama weThemba Community had its origins in the 90s, when Archbishop Emeritus Desomond Tutu, their Patron, invited members of the order to establish a mission in South Africa.

“We did not want to recreate the mistakes of previous waves of colonial outreach,” Brother Scott explains. “Rather than establish a Community of North Americans in Africa, we sought to facilitate the building of an African community.”

The Benedictines arrived at Hillandale in 1997 and immediately set about engaging with the community around them.

“Monastic life is not in any way withdrawing from the world,” Brother Roger would later explain when the discussion turned to the point of praying. “It’s paying attention to what you see and hear and responding according to what you understand from that.”

One of the first things they witnessed on their doorstep was that in a move heralding a major policy change, the Education Department closed down a nearby farm school. Children in the area had no way to get to other schools in the town.

At first, the Brothers started a transport scheme. But when they saw the poor conditions under which most of Makhanda’s children were learning, they instead started a scholarship fund to send the farm children to better local schools. This was supported by an after-school programme run by professional teachers and based at the monastery.

Seeing what a difference the individual attention was making for the local children, the monks founded Holy Cross School in 2010.

The lesson is to be able to help something come into being, but not stand in its way.

In a town considered an important learning centre, in a Province with chronically underperforming State education, this was a significant intervention. The well managed no-fee, foundation phase, Xhosa-medium school staffed by well trained, motivated teachers filled an important gap in the town’s educational landscape.

Now they’re handing over that stewardship, they explain.

“We’re not abandoning the school,” Brother Roger emphasises. “Our gift was to found the school, but not to run it. The big thing for us is to know when to release a project to allow it to grow independently.

“The lesson is to be able to help something come into being, but not stand in its way. We accept that we don’t get to write the future – but we hope the school will grow and flourish.”

And while many will consider Holy Cross School the Community’s most significant legacy, the Brothers say that was not what it was all about.

“Our work was the prayer. The school was a product of our mission – not our main reason for being here,” says Brother Daniel. “What is important is our presence: the prayer, way of life and hospitality we offer.”

Community, Hospitality, Respect, Stewardship and Love of learning are some of the Order’s main principles.

“The main thing we’ve learnt during our time here is not to dissipate our energy,” says Roger.

The school and the guest house, while completely worthwhile, was also a distraction from their primary job of contemplation.

That said, at Volmoed, hospitality will be one of the things that sustains the monks.

“Our involvement in the hospitality industry is also what allows us to be present to many people.”

When the Benedictine monks arrived in Makhanda in 1997, they’d envisioned growing the Community in a way that would sustain itself.

“We had a very optimistic view,” says Scott. “But at a time when many communities are closing, the fact that we’re holding our own is a good sign,” says Scott.

What are their thoughts for and about the town they’re leaving?

With good stewardship an important precept of the Order, it’s particularly difficult, says Roger, to have watched Makhanda’s deterioration.

“We’ve had a lot of interaction here and have made good friends in the town. We have great sadness because it seems to be struggling in a lot of ways.”

“But that’s not the reason for the move,” Scott emphasises.

The monks say they’ll always have an interest in the lives of the people they’ve interacted with here.

“Many of the ‘children’ we once brought through the school are now all over the country, successful working people with degrees,” Daniel says. “But that’s how it’s supposed to be: you invest in people’s lives and they move on.

The monks will host a farewell service at the monastery chapel at 10am on 24 August and will leave for Volmoed the following weekend.