Fikizolo takes 2nd in the country for nutrition award 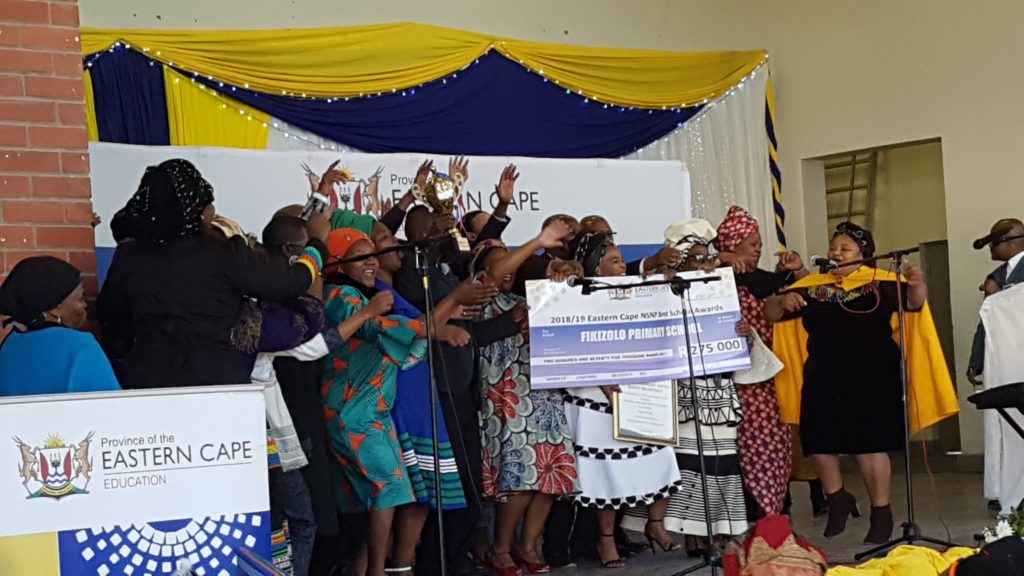 Fikizolo Primary in Makhanda (Grahamstown) came second in the nation for its innovation in advancing the National School Nutrition Programme (NSPN), winning R275 000.

The award, which forms part of a competition which over 9000 schools participated in, acknowledged the dedication of the school’s management, educators, volunteers, food handlers and governing body in implementing the government nutrition programme.

The Eastern Cape government and Makana municipality delivered the award to the school and commended seven other schools in the area for their nutrition programmes at the Joza Indoor Sports centre on Thursday 25 July.

“Fizikolo has done us proud,” said Councillor Ramie Xonxa, representing the mayor and chief whip. “What happened at your school has brought faith to our district.”

One of the key aspects of the nutrition programmes success in the Eastern Cape, said Verona Witbooi, the provincial director of the NSPN, was the province’s use of decentralised funding where funds to feed each child were delivered to the school to manage the feeding programme. The only requisite is that the schools propose their menus to the provincial department of education where the meal plans will be assessed and accepted by dieticians.

The nutrition programme is targeted to quintile one to three schools, “some of the most vulnerable schools in the province,” said Witbooi.

The programme helps pupils kickstart their day explained Siyamthanda Booi from the Communications Department at the Eastern Cape Department of Education. “It’s important that the programme is initiated as early as eight in the morning and the menus should be  changed regularly as different foods help with memory and energy.”

The nutrition programme, said Sharon Maasdorp, Chief Director for Education Social Support Services (ESSS), is to give pupils healthy meals, keep children in school and then have the children excel. “It’s more than the meal you are served, it [the programme]forms part of your curriculum.

Fikizolo Primary stood out for a variety of reasons – the principal and the children were involved in the nutrition programme at the school and any money saved in feeding the children was used to buy meat to “spoil the pupils” said Mohupe from the Department of Education who was involved in adjudicating the competition. Factors used to assess the schools nutrition programme included management and the general school environment towards the programme.

Fikizolo Primary was not the only school to be recognized nationally and commended on Thursday. Nombulelo High School won the National Music Champions in June this year and provided the musical entertainment for the event.

“As [the]Eastern Cape we must celebrate our best practices,” said Maasdorp. “To all the other schools who participated in the competition, keep striving.”

“We promise to beat Gauteng to first place next year,” she added.

The National School Nutrition Programme benefits 1 594 621  school learners in the Eastern Cape, according to the 2019 budget report.

Several schools were commended for their feeding programmes and received cash prizes too.