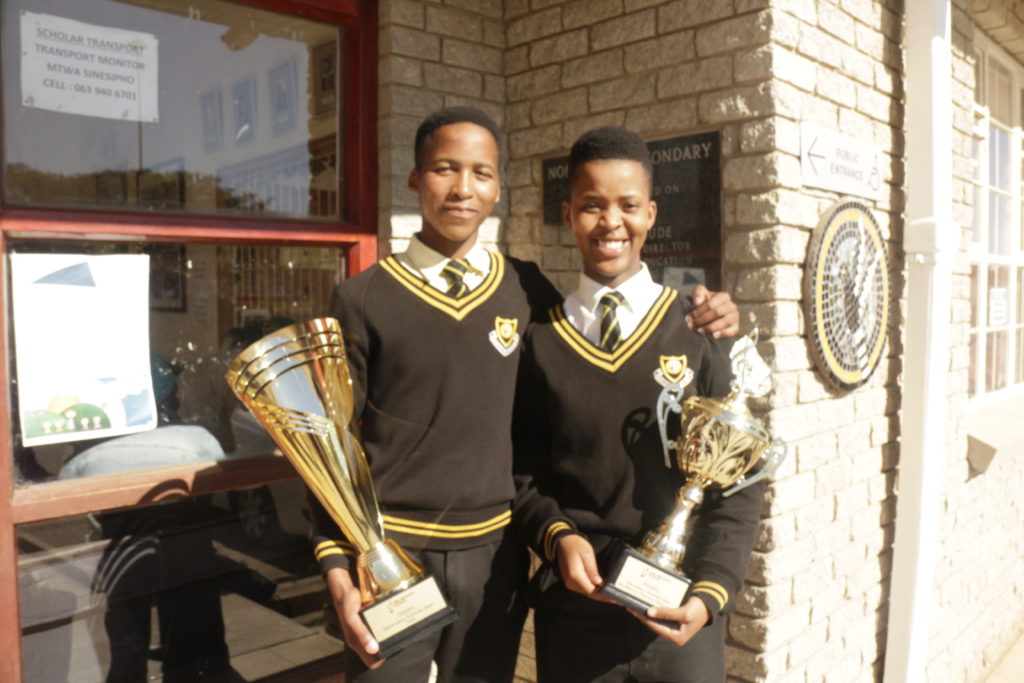 Nombulelo Secondary School is celebrating two of their students, Liyabona Qutywa (grade 10) and Oyama Vena (grade 11) after winning top prizes at the South African School Choral Eidsteddford (SASCE) in Johannesburg on 25 June. The competition is part of the ABC Mostepe SASCE and aims to enhance singing talent of South African learners through stage performance and music.

Qutywa said she started singing in 2009 while attending Samuel Ntlebi Primary School. “There I was singing between alto and soprano, now I am singing first soprano for the Nombulelo choir”, she said. Qutywa said she was very nervous when she found out the song she was selected to sing was in Latin.

“At first I was scared to sing “Qui sedes ad dexteram Patris”, but Mpumelelo Maquntu, a conductor in (Makhanda) helped me to prepare and understand the lyrics of the song”. Qutywa said the song is about a boy in an orphanage who sits at the right hand of the Father and asks him to have mercy on them.

Vena said he started to love music from a young age. “I was inspired to start singing after watching a local choir rehearse in our community. After that I decided to join the Sakhumntu Choral Choir in 2016”.  Last year Vena came fourth place at the competition but this year he said they were better prepared.

Nombulelo Choir teacher, Xolani Jonono, said he had big dreams for the choir and hopes they can go on tour overseas in the future.

“For Oyama and Liyabona the trip to Johannesburg was their first experience on a plane. They were both excited and happy about traveling on a plane.”

He added that there were many obstacles still facing the choir.

“One of our biggest issues is finding a pianist to accompany the choir. Most of the pianists charge exorbitant amounts that the school can not afford.”

Jonono stated that he hoped to have a collaboration with the Rhodes University Music Department where students could assist in playing the piano for the choir.

He said that although the prize money for the competition would be going to the school, he hoped a portion would go to Qutywa and Vena as they worked very hard and represented the school well.

Grocott’s Mail congratulates Nombulelo for their achievement as well as Qutywa and Vena for truly singing their hearts out.