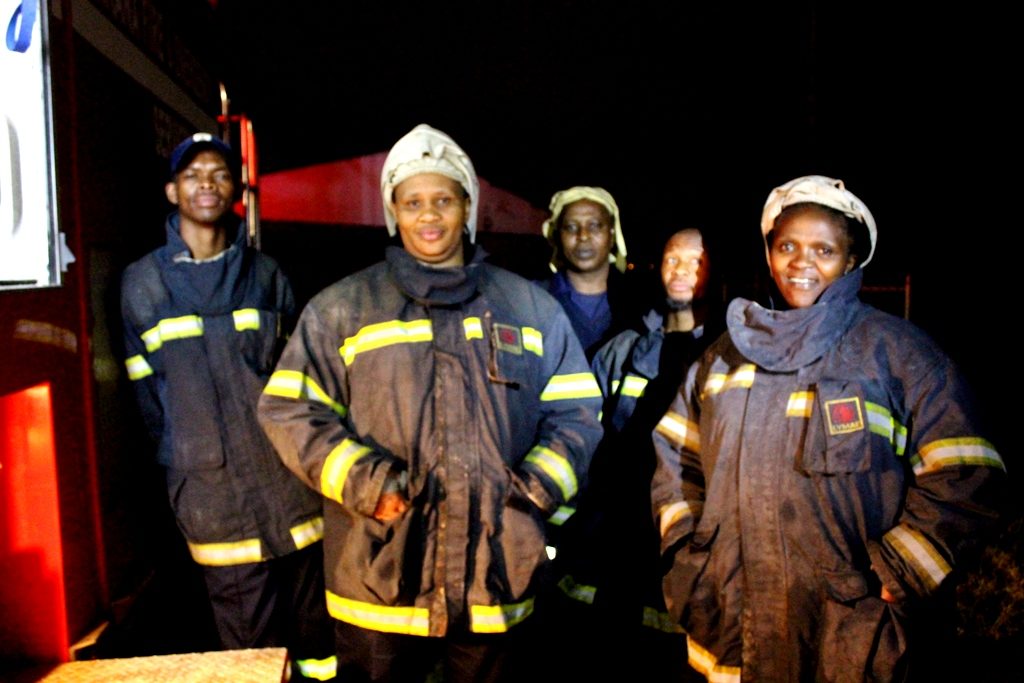 It took fire fighters less than 30 minutes to extinguish a blaze when an electrical transformer at the Makana substation in the Industrial Area caught fire shortly before 8.30pm tonight. Most of west Makhanda, served by the transformer which is adjacent to the old Power Station, was without power for around 45 minutes.

“When we got here it was huge,” said Senior Firefighter Nontisikelelo Nonqotya. The power lines were shooting everywhere.” Fire Fighters Nonqotya, Booi, Njoko and Nombulelo Mkele contained the blaze quickly, using foam. However, emergency personnel on the scene afterwards warned the situation was still highly dangerous, with the transformer oil critically hot. An hour after the fire was reported, around 9.20pm, power had been restored to most areas of the city, routed through various substations. However, at 10pm, Welkom said Makana chief electrician Mzomhle Radu was still busy trying to restore power to Rhodes University which, along with the Industrial Area, remained without power.

“All other areas were rerouted using other substations,” Welkom said.
“Everything is under control, but the fire crew is on standby while Mr Radu is working there.”

Welkom said additional personpower (standby and off-duty) was put on alert to be ready to respond. Rhodes University’s water truck was also called and on standby.

“The crew did a sterling job to bring the fire quickly under control,” Welkom said. “The support from the Electricity team to isolate the plant quickly for fire fighting should also be commended.”

“It was all teamwork we have done,” said Firefighter Nonqotya. “If it was not teamwork we couldn’t have managed.”