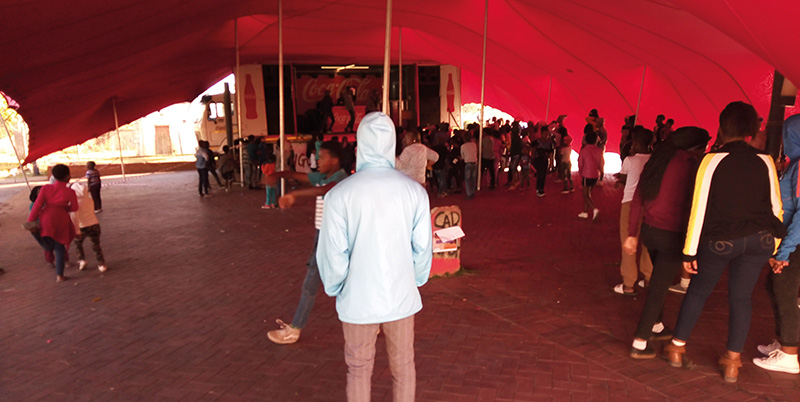 From the first to the fifth of July 2019, Xolile Madinda the curator and founderof Fingo Festival together with the locals of Makanda, local artists and his visitors from University of Virginia celebrated the 10th annual Fingo Festival at Fingo Square.

The event was successful despite poor weather and scant funding and rejections which he was going through on this year’s festival.

Madinda said, “Much as it didn’t go according to the dialogue, Nomalanga Mkhize ensured the children’s programme proceeded, and all thanks to the students from Virginia and to the Sarah Bartmaan District for assisting in the costs.”

The sponsored Coke truck and red tent arrived on the first day of the festival, leaving organisers little time to set up.

Much as they were sponsored by the Sarah Bartmaan district, the funds couldn’t cover the whole program meand it put him under pressure, Madinda said.

“Politicians can easily speak in public about supporting the Fingo Festival, but they never specify how much they invest, so people should understand that Fingo Festival is not well funded. It can even operate on as little as R40K at times.”

People came in their numbers to the Black Power Station. “Some of my friends who were performing on the fringe said that the BPS had more attention than some of the shows in the fringe, which means there is a lot coming for the space,” said Madinda.