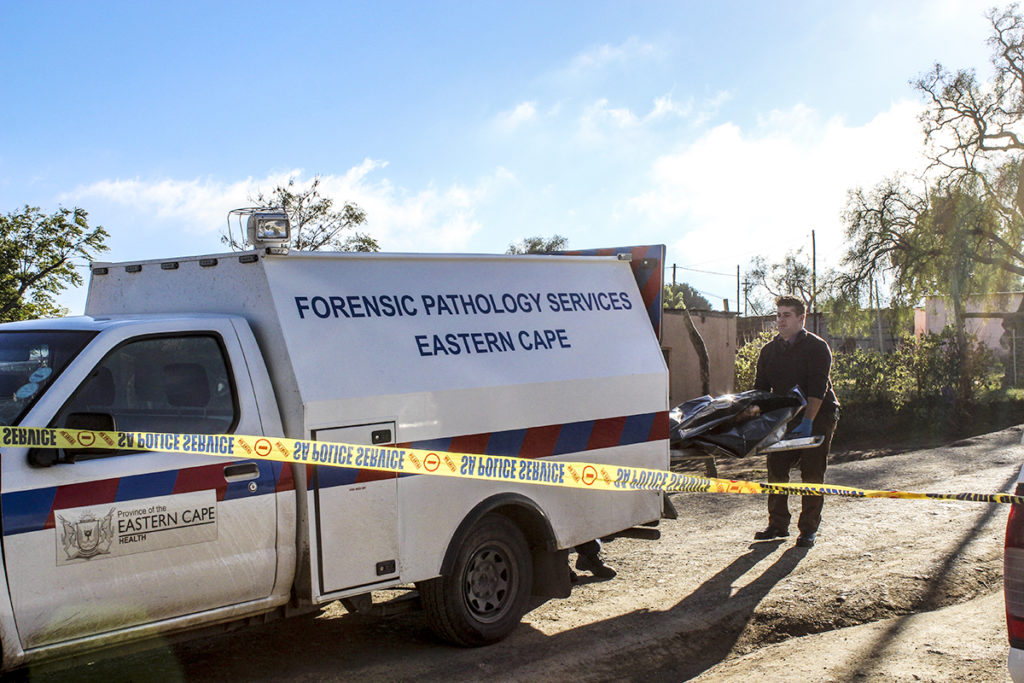 “We urge the public not to speculate on the cause of death. A post-mortem on the body will be conducted and the outcome should be available tomorrow,” Mpahlwa told Grocott’s Mail.

Police and councillors would be available to answer questions at a community meeting Thursday 11 July at 4pm in BB Zondani Hall.

In addition, the municipal electrician has been tasked with urgently attending to the high-mast lights in the area to ensure these are functional. Mpahlwa said these should be operational by the end of the week.

The meeting was called urgently as community members expressed alarm and outrage after the body of a woman was found in Victoria Street early Wednesday 10 July, shortly after sunrise. Some residents believe she was attacked by dogs. Packs of stray dogs roam many parts of the city, and are noticeable in Tantyi, where the body was found, as well as Hlalani, Xolani and Fingo.

The horrifying discovery was made around 7am Wednesday by a woman walking to work. She alerted residents in the area, who called for an ambulance. When Grocott’s Mail arrived just before 9am, police forensic services were there, along with local councillor Luyanda Sakata.

“It’s the second time for this to happen here,” Thembinkosi Sankobe said. “Last time it was just across the road there,” he said, pointing a little way up the road, opposite where the woman’s body still lay. “That time also it was dogs.” Police had not confirmed to Grocott’s Mail the previous incident, including the cause of death, by the time of publishing.

He also said the area was dangerous because a mast light meant to illuminate the area had been inoperational for several months.

“We’ve told the councillor, but nothing has been done,” he said.

“I was taking my kids to school when [the neighbours]came and told us about this,” he said.

The badly disfigured body lay in a small patch of open ground between houses. Residents said they hadn’t heard or seen anything unusual. The police have not confirmed that the victim was mauled to death by dogs.

Ward 10 councillor Luyanda Sakata said he’d called a meeting with residents earlier this year, where they’d been addressed by the SPCA as well as Makana’s Parks Department.

“We told residents they should not have more than two dogs and they must close their yards properly so the dogs stay inside,” Sakata said. “Thando [Dlalani, from the Makana Parks Department] said any stray dogs would be caught and taken to the SPCA.”

Police spokesperson Captain Mali Govender did not confirm the suspected cause of the woman’s death, and said an inquest for investigation had been opened. In addition, senior police would Wednesday afternoon meet with a municipal delegation led by the Mayor to urgently address the problem of stray dogs in the city.

Makana Mayor Mzukisi Mpahlwa visited the scene Wednesday morning. He was briefed by the police and councillors.

“This is sad and shocking,” Mpahlwa said. “I urge the community to allow the police to do their work in solving this.”