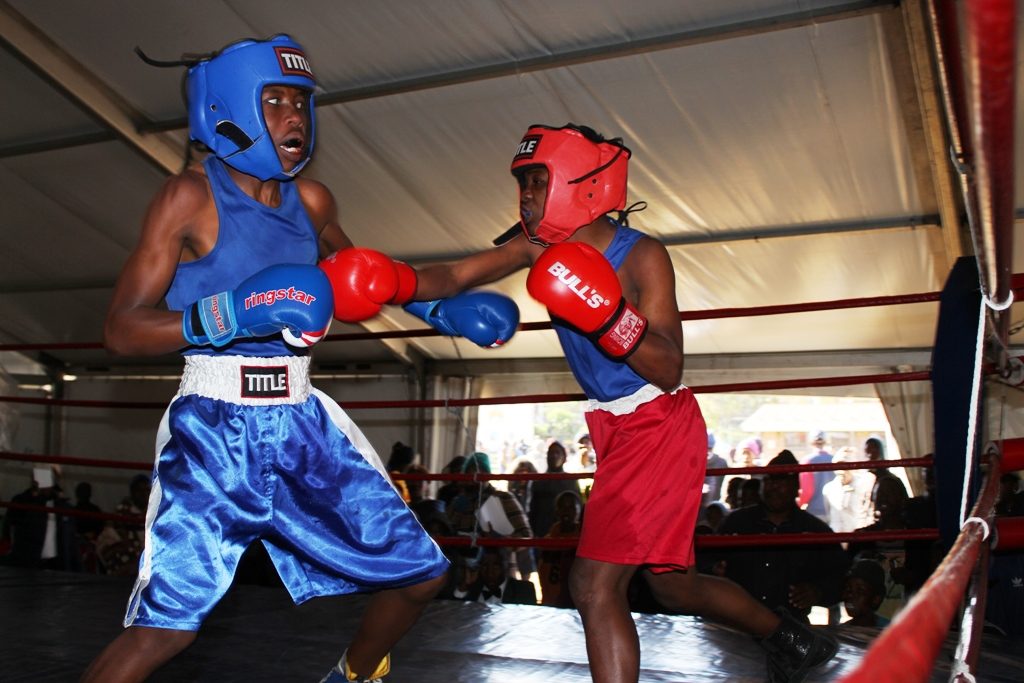 Youngsters in the Fiddlers Green arena during the National Arts Festival on Friday 5 July 2019. Masibambane, Mfuzo and Nosizakhe boxing clubs participated in various bouts during the weekend. Photo: Sue Maclennan

Last Saturday saw the conclusion of both football and boxing tournaments held at Fiddlers Green as part of a range of activities during the national Arts Festival.

A number of thrilling bouts had the Festival crowd on the edge of their seats in the boxing arena. But there were also some mismatches with boys pitted against girls. Boxing fans gathered around the ring made it clear they did not approve of the mixed bout: beyond a certain age, boys will always have an advantage over girls, no matter how good a female boxer is.

Acknowledging the concerns, one of the Makana Boxing Organisation (Makabo) officials said this was because many female boxers were unavailable at the time of this event.

The last bout of the tournament had the crowd on their feet, as both boxers showed skill and accuracy, showcasing the best talent that Makhanda has to offer.

In football, it was down to two teams contesting the final – but it was a family affair as both City Pirates teams faced each other. A total of 16 teams competed and the small margins in the final scores showed how fierce the battles were.

In the third and fourth play-off match, Black Stars defeated Sakhulutsha by 2 -0 to claim bronze.

In the main game of the day, City Pirates A clashed with City Pirates B in a tough and entertaining game. There were no goals at halftime – although both teams played some good attacking football.

In the second half, Pirates A started pressing more and forced their opponents to make some errors at the back. This resulted in Musa Mapini’s brace that proved enough to win the Premier’s Cup title.

City Pirates team manager Nkululeko George was very pleased with the way his players played in the final.

“It was not an easy passage to the final for both of our teams, but through hard work we managed to reach the final. Special thanks to the organisers who came up with such a great event,” George said.

MEC for sport in Eastern Cape Fezeka Bayeni promised to improve the standard of the tournament and urged more young people to participate in sport. Former Bafana star Daine Klate told the youngsters that education is very important, as sport is a very short career.

Speaking to Grocott’s Mail, Klate said, “I have seen some very talented young boys here who just need proper training and guidance. I think we need to come more often to such events to try and unearth the talent that these boys have.

“This is not a good pitch – but look at how they expressed themselves in these conditions,” Klate said. “This was a very good initiative by DSRAC and the National Arts Festival which needs the support of all sport lovers in Makhanda.”

The National Arts Festival  donated boxing equipment to Makabo, while DSRAC donated trophies, medals and balls and also provided transport to the participants.

The organisers probably need to look at the safety of the of other festival goers in the same venue – a few were hit by flying soccer balls, much to their surprise. But hats off to the organisers for a great family day which was well supported by Makhanda residents.