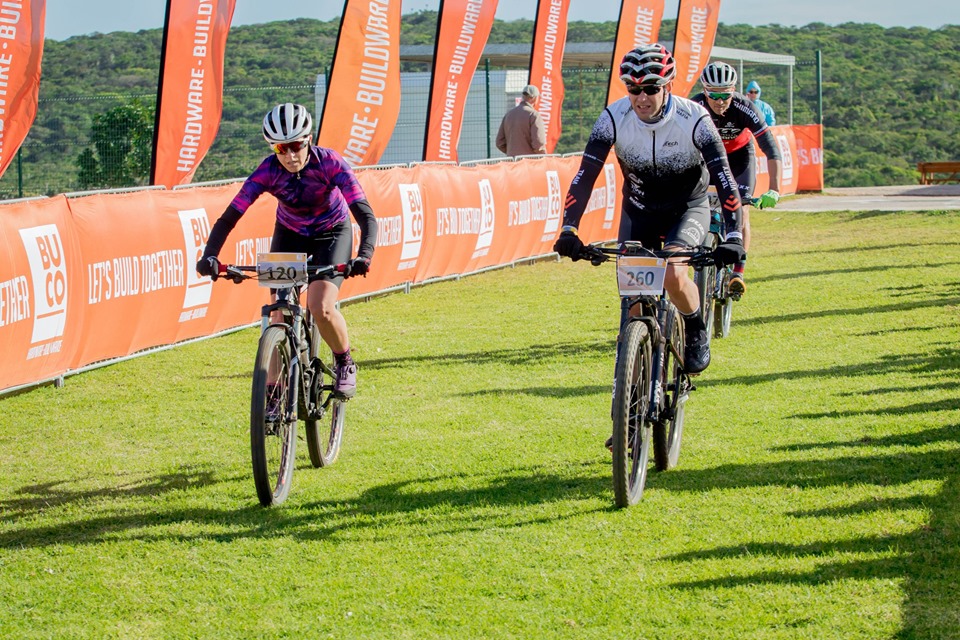 Two hundred and seventy six cyclists greeted a snow-kissed 36km/h headwind at the start of the G2G Cycle Race early on Sunday 7 July.

The mountain bike race starts at BUCO in the Industrial Area, crosses the N2 and takes cyclists via Waainek on to Mountain Drive for the climb up to Dassie Krans, past Mountain Drive Manor and via the Toposcope continuing eastwards down the hill.

The wind remained a constant companion once the field turned the corner off Mountain Drive and on to Woest Hill and the Southwell road that leads to the sea.

Men’s winner Jason Peach said afterwards, “It was a crosswind for most of the race, coming over your right shoulder. I was a bit worried initially that it would make the race slower than normal – but in fact it was the fastest I’ve done in my three years of doing the race.”

As they turned into the last section of road, an easterly lent them wings.

“We were really flying,” said Peach.

Women’s race winner Lauren Smith, who is a road cyclist by habit, was among those who appreciated the improved condition of the road. Graders were working on the final 15km the day before the race – and it showed.

“The race really suited me,” Smith said. “I’m not actually a mountain biker, I’m a road cyclist – but there’s not much technical stuff and it’s a really good race.”

“The road is in very good condition compared to the past two years,” said Peach. “The last 15km is almost like a tar road, it’s so smooth.”

Many participants praised the organisers for a well-run event and ambulance staff were relieved to have an incident free day. The cool weather (some would have said icy, with snow having landed on Eastern Cape mountains a few days earlier) meant dehydration and heat exhaustion weren’t an issue. The technical Toposcope descent, always a bit of a challenge, and the steep, twisty descent down Woest Hill this year remained incident-free.

“We are very happy with the turnout of cyclists for the 2019 G2C,” said organiser Lindsay Vroom. Despite the strong winds, we had over 330 cyclists register, with 276 starting the race and braving the weather to complete another great race.

“The cyclists were impressed with the condition of the route and no injuries were reported, which is always a good sign. The success of the event includes many many hours of hard work and support from the greater team and sponsors: our sincere thanks to all for their involvement. And of course the cyclists and their families for supporting this years G2C.”