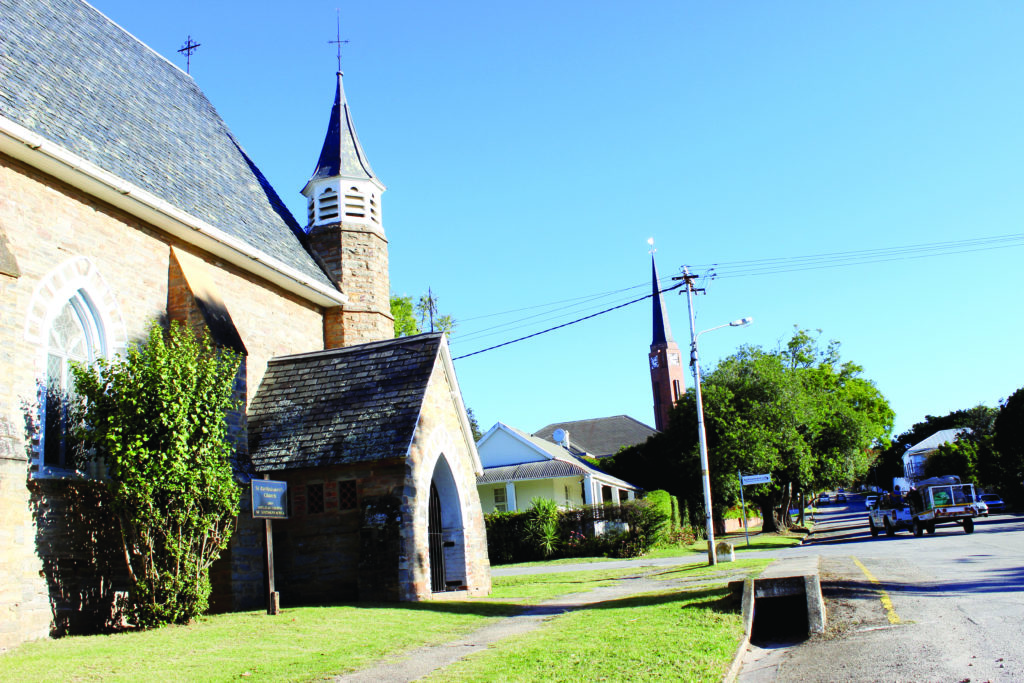 Members of the community have been invited to an information and question meeting with the company planning to erect a cellphone tower between the house in this photo and the Dutch Reformed Church behind it. Photo: Steven Lang

The Dutch Reformed Church in Sunnyside, Makhanda (Grahamstown), says it will abide by the legal and municipal processes regarding a cellphone tower proposed to be erected on its property.  The 25-metre-high mast will initially cover an area of 64 square metres, roughly midway between the Dutch Reformed Church and St Bartholomew’s in Market Street; however, should the proposal be approved, the contract allows expansion of the site to 180 square metres.

Residents and property owners in the area have expressed strong concern about the proposal, with health concerns regarding electromagnetic radiation high on the list. Others include a possible decline in value of surrounding properties, environmental  impact and aesthetics. As a result, the Church has arranged for the company to brief residents and answer their questions at a public meeting next Tuesday.

“We want to do the right thing,” said the Church’s minister, Strauss de Jager. “Our motivation for agreeing to having the tower here was because we believe it will benefit the community.”

In its application to Makana Municipality the company, Atlas Towers, says the mast is needed because of an increase in cellphone subscribers. This means more signal strength is required.

“There are no cellular masts within the immediate vicinity,” the company motivates “… it is clear that a mast in the area would be beneficial to the area as the community will have access to reliable cell signal for both voice and data.”

The Church grounds are currently zoned Community Zone 2. Atlas says, “The position identified is not currently fully being utilised by the church and therefore ideal for the proposed development.” Atlas has applied to Makana Municipality for the split zoning of the erf, number 4102. The Church is surrounded by residential properties.

While the plans on display for public scrutiny at the Town Planning office show plans for an area of 8m x 8m, the lease agreement allows for expansion up to 180m² “with mast/antennas and containers, excluding access; such fences and/or other structures or equipment for security and/or safety purposes, if applicable or necessary”. The total size of the property is 1193.8m².

Three microwave dishes and two sets of operator antennae are shown on the plans for the initial 25-metre mast, which will be camouflaged as a large conifer.

The Church was approached to host the tower more than a year ago. Church Council minutes and correspondence show that the matter was considered and questioned intensively before the agreement allowing Atlas to proceed with the application was signed. Council Chairperson Joubert Retief said they had given Atlas power of attorney to negotiate with Makana and to get permission for the structure in terms of the municipal by-laws. Power of attorney was also in order for the company to secure an electricity supply and other technical and infrastructural requirements.

The rental the church would receive is R4500 a month over the nine years and 11 months of the contract, according to the agreement which is subject to a range of planning regulations. These include municipal infrastructural policies, the Civil Aviation Act and environmental laws. In the case of the proposed Market Street tower, approval would also be subject to its being passed by the municipality’s Aesthetic Committee.

Makana acting Town Planner Gcobisa Mfeti confirmed that the Dutch Reformed Church in Makhanda falls within the city’s Conservation Area. This is the historical centre of Grahamstown as defined by Makana’s Local Economic Directorate and developments in this area are also subject to approval by the Eastern Cape Provincial Heritage Resources Agency (ECPHRA).

“The Aesthetics Committee needs to comment if the cellphone tower is to be erected on a property that is within the conservation area, even though there is no specific regulation or bylaw regarding cellphone towers,” Mfeti said.

Mfeti said this included that there was also no specific limit for the number of cellphone towers permitted in an area according to the municipal by-laws.

Grocott’s Mail understands that five Makhanda schools have also been approached to host cellular masts, with similar rental benefits to the cash-strapped schools. These applications are still in the early stages.

In April 2018, Talk of the Town reported that Ndlambe Municipality had rejected an application to build a cellular mast on the property of the Dutch Reformed Church in Port Alfred. A year earlier, community members had raised strong objections, even protesting outside the church with placards as the congregation arrived for Sunday services. In the piece, ‘No’ to cell mast, Jon Houzet reported that while the church had deferred to community pressure and withdrawn from the process, it was in fact out of their hands. They’d signed over power of attorney to Atlas Towers, who proceeded with the application. However, because the company had failed to follow procedure to the letter, the application was refused.

Market Street resident Colleen Osborne, whose lives next door to the church, metres from where the tower would be erected, said she was horrified when she heard of the plans.

“Just over a week ago I was alerted to it by concerned neighbours,” Osborne said. “Firstly I had absolutely no official notification form anyone – not the property owner, municipality or the developer. I’m horrified and am objecting first because of the rezoning of the land without my being consulted as direct neighbour and second because of the tower itself.”

Her concerns mirror those of others in the area who cite health concerns as a result of electro-magnetic radiation, aesthetic concerns, disturbance to garden wildlife and the effect on the resale value of properties in the area.

“Our main concern is that all the legal requirements are met,” De Jager said. “We are subject to the law.

“I think that likewise the concerns of the community should go through those channels. If there is a concern, something not covered by the legislation, then the pressure should be on the government to properly regulate it.”

A legal notice published in Grocott’s Mail on 14 June announced the proposed rezoning and invited members of the public to inspect the application daily at the Town Planning Department between 8am and 4pm. The closing date for objections in writing is 15 July 2019.

Retief has invited residents to a meeting on Tuesday 9 July at 5.30pm in the Neels Heunis Hall at PJ Olivier. Representatives from Atlas will be attending to provide information and answer questions about the proposed project and the processes. This meeting is in addition to the legislated consultation the company is required to undertake.