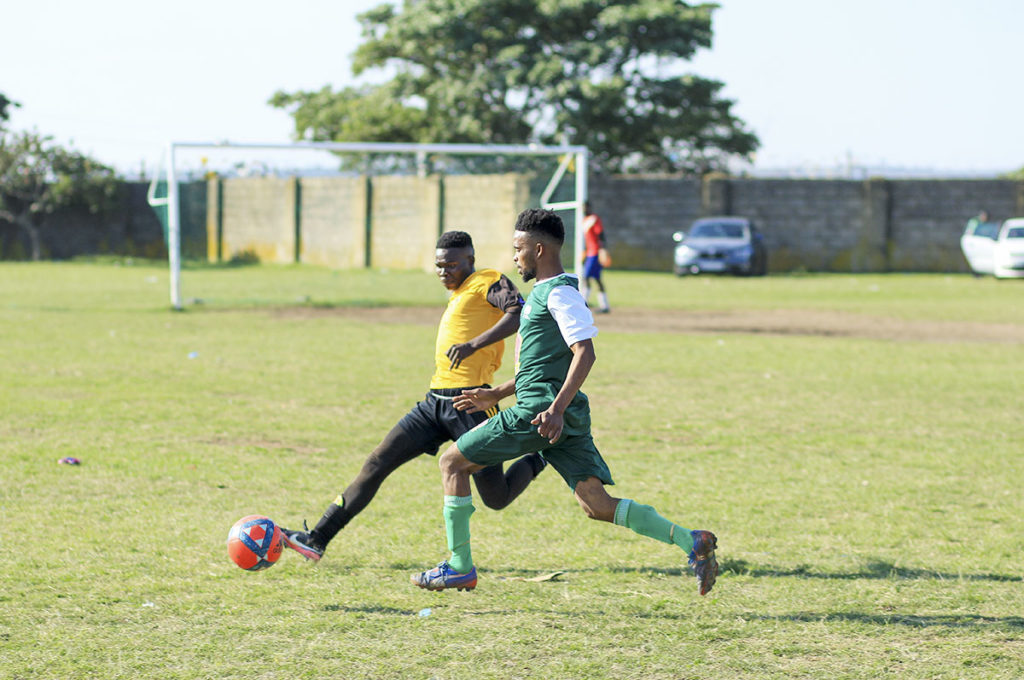 A Makana Pillars attacker puts pressure on Love and Peace' s right back at JD Dlephu Stadium on Saturday 1 June. Photo: Mzwanele Sibanda
By: CHRIS TOTOBELA
After a spectacular start to the season, which saw them going a number of weeks without a dedeat, the Makana Pillars are the new Makana LFA champions for 2019.
They played a very good and attacking brand of football which many of their opponents could not really cope with.
The only two defeats the Pillars suffered this season were from their closest rivals, and fellow title contenders, Jacaranda Aces who pushed them all the way.
Pillars will now move up to the SAB regional league where they will join other Makhanda based sides City Pirates and Maru.
Pillars will not get the chance to celebrate their achievement for too long, as they need to begin their preparations ahead of the SAB league next season. They will embark on the difficult task of finding enough under 21 players, which each team is required to field in the SAB league, and need to have at least five U21 players in their starting line up.
They also need to give them enough time and practice to blend with the rest of the team before the new season kicks off.
Pillars will have a second stint in this league after being relegated from it few years ago. It will require a lot of hard work and discipline for them to survive in the league as the standard is completely different from the local league.
They had a superb run in the local league and really deserve to be champions as they have really worked hard week in and week out trying to get something from every game they played. Now is the time for them to switch on and face the daunting task ahead of them.
Previous ArticleNdwayana in search of new title
Next Article From Joza to Slovakia… with discipline