From Joza to Slovakia… with discipline 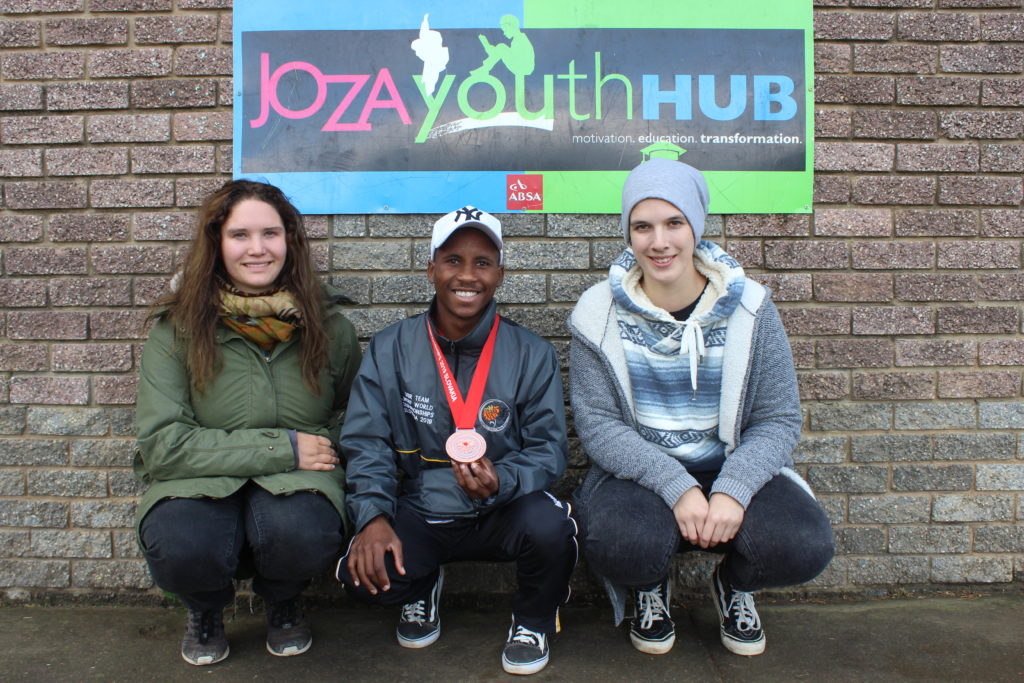 Commitment, discipline and willingness to work hard are some of the qualities that last week took Makhanda (Grahamstown) karateka Thanduxolo Royi to a medal in the WUKF World Championships. Royi is only the second South African to have achieved a finals medal in senior men’s kumite at this event.

Surrounded by more than 2000 competitors from countries across the world was very exciting – but it was also tough on the nerves, Royi said.

Royi is South Africa’s (and Makhanda’s) second senior male karateka to have won a medal in kumite (fighting) at the WUKF World Championships, winning bronze in the U65kg Men’s Individual Kumite.

“It was a tough division. A lot of them were well known karateka who have taken part in European championships,” Royi told Grocott’s Mail in an interview on his return home.

His first round was a fight against a competitor from the US. He went to the second round – but this time he was up against his fellow South African – and hometown competitor – Lutho Singata. Last year, in Scotland, Singata won bronze medals in both the Junior (18-20yrs) and Senior Men’s (21-35yrs) under 65kg Kumite Categories, the first South African to win a World Champs finals medal.

This year, it was Royi who went on to win bronze, narrowly beaten by 6 points to 5 in the semi final by Meenhaz Janar of England.

He described how it had felt the night before the fight.

“Once I heard I was in that final, I didn’t sleep,” Royi said. “I told myself I was aiming for the gold, and I did some extra practice.”

He’d already got a good idea of his competitors’ moves by watching the team-fighting on Thursday.

“I figured out what they love to use on the floor. Once I’d read them, I went back and worked on my own approach.”

Royi’s journey to the world championships started in 2009, when as a young boy he started karate under the guidance of Sensei Zwelakhe Sinam.

“I was so happy,” he recalls. “I always used to watch martial arts movies – Bruce Lee, Jeanne-Claude van Damme – and now I was doing that stuff.”

From Sensei Sinam, he went to Mzwandile Matebese. Matebese, alongside ECSR Head Instructor Gary Grapentin, was his main inspiration.

“He believed in me,” Royi said. “He encouraged me a lot, really inspired me and since then, I’ve done karate my whole life.”

Backing him all the way, too, was his mom, Ntombekhaya Fani. He returned to live with her in 2006, at the age of 8. “She really wanted me to be like my brother and play for one of the big football teams,” he said. “But when she saw how much I enjoyed karate she supported me.”

Without his siblings (who remained in Joburg), things got lonely for Royi and that’s when he learnt to focus on his sport.

“I have some friends who did sport until they became teenagers, and then they decided it was cool to drink and do drugs. It’s a big problem here.”

In 2016 Royi earned his first black belt. When he achieved Second Dan, he decided next had to be the World Championships. He was selected for the team for Italy two years ago, but couldn’t raise the funds.

“It’s not like soccer winnings where the money’s big. People thought I’d be coming back with thousands, and would start building my house here. They couldn’t believe it when I told them it was just a medal!”

His trip to Slovakia, at age 21, was his first overseas visit. The championships were held in Bratislavia. Highlights for him were the beauty of the historic city’s buildings – and seeing an electric car being charged for the first time.

Royi’s day job is supervising and assisting learners at the Joza Youth Hub Open Lab. Aside from that, he trains with Matebese three hours a day, seven days a week.

“We train in the morning for an hour and a half, and again in the afternoon,” a proud Sensei Matebese said.

He’s thrilled both for Royi, and for his home club, the Joza Karate Club.

It clearly works both ways.

“Karate teaches you discipline and without that you can go nowhere,” Royi had said in his earlier interview.  “I am a quiet person and I prefer to associate with people who can take me somewhere.

“Karate is still my first friend.”

Keen to try karate?
* The Joza Karate Club trains at the New Indoor Sport Centre in Extension 6, Joza. Classes are 5pm-6.30pm, Monday to Thursday. If you’d like to join, go there during training times to speak to Sensei Matebese.
* The USR holds weekly classes in Hill Street, Port Alfred and Kenton. For more details visit their website ecsrkarate.co.za/