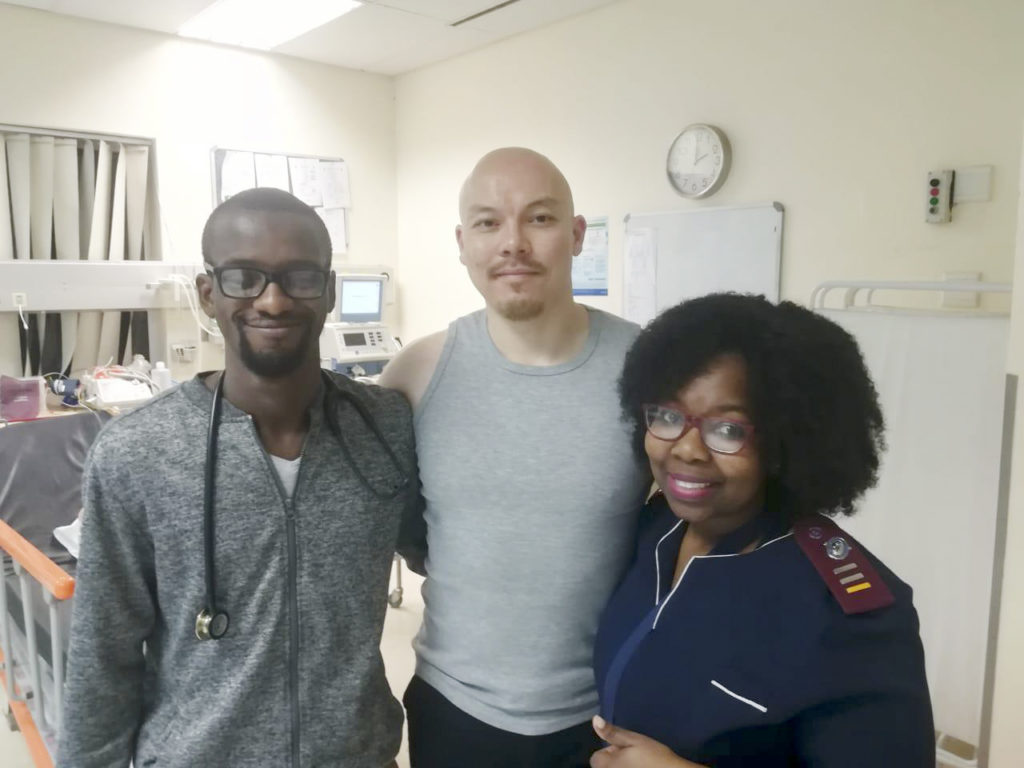 Performer Li Lau assured everyone he was in good health after an accident that stopped the  National Arts Festival performance around 5pm on Sunday 30 June. Speaking in a video clip, he thanked the audience for their support and concern after the accident and said the show would be on again today.

The show, Carnival Sideshow and other Magical Things, is a duo with fellow illusionist Brendon Peel. It features extraordinary acts including performers appearing to swallow glass, and swallow a piece of string, only to pull it out of their eye.

The act in which Lau was accidentally injured involves his being handcuffed in four places with his head tethered between two metal poles. While Lau is undoing the cuffs, there is a crossbow, around three metres in front of him, aimed at his head and set to a home-made timer involving a bottle of water and a bag of corn.

Lau has to first free his thumbs using a pin, then he open one handcuff and then the next by using the same pin.

During yesterday’s incident, he’d got as far as freeing the one around his midriff when the drama happened.

One audience member said, “The crowd witnessed the crossbow hit him on the top of the head. He slumped in his neck brace and his hand twitched and then he was totally limp.

“Everyone thought he was dead. There were a lot of children there and everyone was screaming and highly traumatised. The audience were told to leave immediately as the crew surrounded him and called the medics. Everyone left thinking they had witnessed a killing,” said the audience member who asked not to be named.

The sense of drama was heightened by the arrival of no fewer than three ambulances, sirens going, outside the Masonic Hall venue.

However, in a video clip released soon after, Lau assured Festival goers that he was fine.

Lau says in the clip, “We just had a little minor incident this afternoon, but I’m all well.” He emphasised that going to hospital after the incident was precautionary.

“We never put ourselves at risk,” he says. “Thank you for all your support – I am 100%. The show is going to go on and I look forward to seeing you guys there.”

Later, Festival CEO Tony Lankester SMSed everyone who had attended the show, saying, “I’m writing to you as you had purchased tickets to this afternoon’s performance of “Carnival Sideshow” in the course of which one of the performers was injured in full view of the audience. The accident was an unfortunate one and we are very saddened by it. Mr Lau, the injured performer, was transported by ambulance to Settlers Hospital where he is currently receiving treatment. We are informed that the crossbow that was fired at Mr Lau did not penetrate his skull. He will be x-rayed shortly to establish whether there is a fracture or any further injury. He is fully conscious and communicating with the medical team.”

Acknowledging that is would have been a traumatic incident to witness, particularly for children in the audience, Lankester invited audience members to contact him directly if they wanted access to trauma counsellors whose services had been secured.

“The Festival deeply regrets the incident and is in conversation with the performers to establish what went wrong with the illusion,” Lankester said in a media statement last night.

“I do feel that show should have been age restricted,” said the audience member who witnessed the incident.

It’s quite an “old-world” show, the audience member said. “You know, with people pulling nails out of their noses and stuff. But I think the title – with ‘magic’ in it – led parents to think it was fine to bring their kids to it,” the person said.

“When I walk in and saw glass on the floorm though, I knew it was going to be something different.”

However, she commended the Festival for being pro-active afterwards, not only providing full information about the actor’s condition, but the fact that Lankester had also acknowledged that watching the incident may have been traumatic for children.