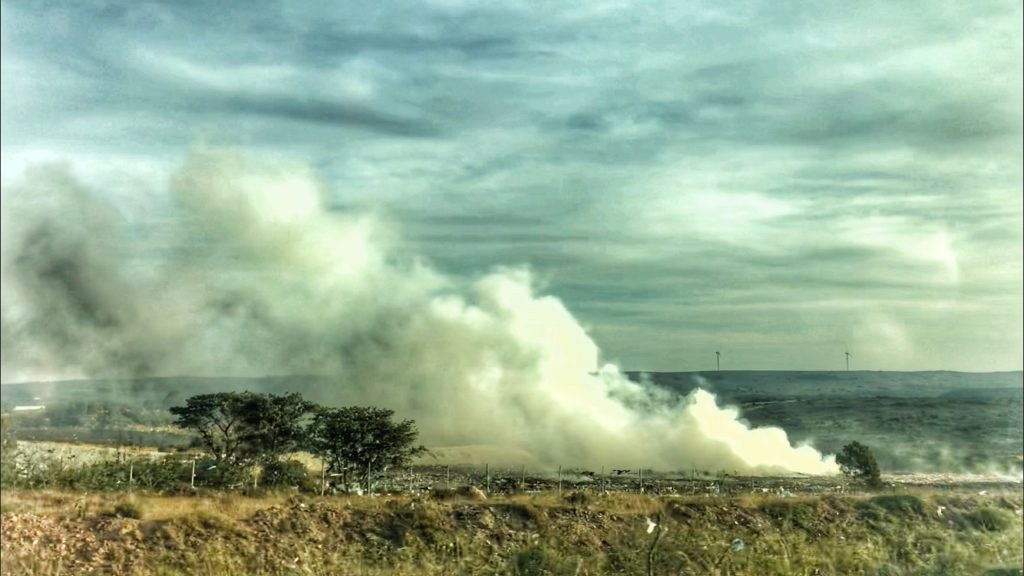 The smouldering municipal landfill on Tuesday 18 June. The smoke from the tip has perfumed Makhanda for over 2 weeks. Photo: Kathryn Cleary

The GRA reminded DEDEAT of the compliance notice issued to Makana in February of 2015, as well as a High Court case in September later that year, ordering Makana to comply with the conditions of their landfill permit.

Last week Makana’s Director of Community Services and Public Safety, Kelello Makgoka, said that currently the landfill was non-compliant; noting that the site had inadequate security, and was not covered and attended to on a daily basis. Makgoka stated that Makana had an aged and broken fleet of trucks to manage the site, and had little funding to attend the the issues.

Makgoka said that Makana was looking into hiring a private contractor to manage the landfill as well as establishing a material reclaim facility in the East side of town. He also added that they had anxiously been waiting since April for possible funding from the Department.

The letter further calls on the Department to investigate if Makana has followed through with the court order as a result of the 2018 High Court case, and urges the province to urgently fulfil its mandate in this regard.

Over the weekend, 22 June, residents took matters more into their own hands and filed an upwards of 30 (and growing) individual complaints to the South African Human Rights Commission (SAHRC). Grocott’s Mail has approach the SAHRC for confirmation of receipt of the complaints and will report back as soon as possible.

This is a developing story.