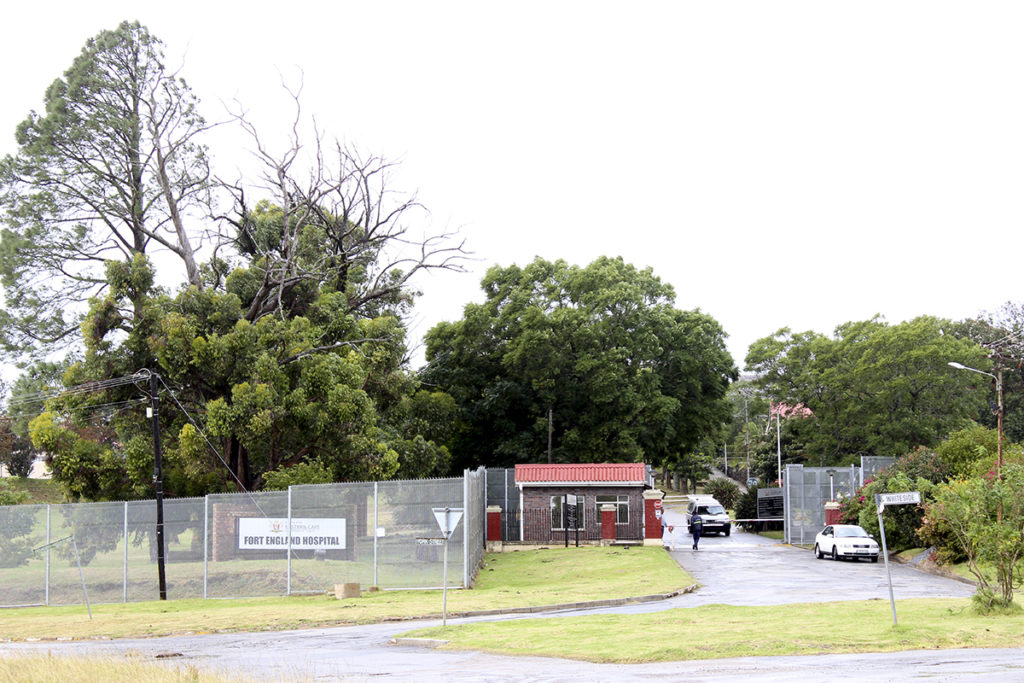 Labour relations officers from the Department of Health met with representatives of the National Health and Allied Workers Union (Nehawu) at Fort England Hospital on Thursday 20 June. This follows two days of picketing by Nehawu members outside the hospital’s main administration block demanding the removal of a senior manager and citing several grievances. Meanwhile, a confidential letter sent to the Department’s provincial office alleges intimidation of some staff by a group of current and former employees. The letter sent 18 June expresses critical concern for the well-being and safety of staff and patients at the level 3 psychiatric facility.

“They listened to allegations by the employees and decided there was a need to investigate them further. They will compile a report and give it over to Bhisho to make a decision about the way forward.

“We can’t be silent about what is happening there,” Manana said. He said the Department’s head office would make a decision about what process to follow once they had seen the report.

Manana was emphatic that as far as the Department was concerned, they were meeting with aggrieved employees, and their union affiliation was irrelevant. “The principle of natural justice applies,” Manana said. “All parties will be listened to. We will be speaking to all our staff.

“No action has been taken against any employee yet, but what we don’t want is instability. We want the smooth running of all our institutions.”

Deputy Regional Secretary of Nehawu’s Max Madlingozi Region, Khonaye Gxaleka,confirmed that he had personally requested the meeting with head office on behalf of the employees his union represents, and that therefore only Nehawu members were present.

“I’m not sure what process other unions are following [with respect to the grievances of employees they represent]. They are not involved in our process.”

Gxaleka said it had been agreed that a report from Thursday’s meeting would be presented to the Head of Department in Bhisho. On Friday 21 June Gxaleka would be briefed on the Department’s intended action to address union members’ grievances and on Monday he would formally report back to union members at Fort England.

“There is no longer an industrial action under way until we have a full briefing from [Department of Health] management,” Gxaleka said. “We will hear what the Department says.”

Fort England Hospital has a total staff of 311 and Nehawu is the majority union at the facility.  Denosa is the next biggest, followed by Hospersa. Grocott’s Mail has been unable to reach Denosa for confirmation on their current position.

Hospersa national spokesperson Kevin Halama confirmed to Grocott’s Mail that the union was not represented at today’s meeting.

“The Department was only meeting with the union of the picketing employees and will only meet with Hospersa next week,” Halama said.  “We have asked the Department to provide a report on a way forward to restore order there.”

The picketing comes in the same week that a strongly worded letter sent to the Department of Health’s Bhisho head office alleges race-based discrimination and harassment. It expresses the fear that staff will once again be forced out of the institution by union action.

The removal of Roger Walsh from his position as the hospital’s chief executive, as a result of union action in 2015 and 2016, made headlines.

In February this year, a Labour Court judgment on Walsh’s appeal against his removal held that unions and their officials had unlawfully hounded Walsh from his post and the hospital. It held that the Department of Health’s failure at that time to respond appropriately to unlawful union action had set a dangerous precedent.

In his judgment, Andre Van Niekerk wrote of the Department, “Instead of reining in the unlawful behaviour of the unions and union officials [and]supporting the applicant in his endeavours to introduce some semblance of orderly management to the hospital, the Department and the MEC had ultimately engaged in what can only be described as appeasement and acquiescence and ultimately, craven capitulation to the unlawful demands by the unions to have the applicant removed from his post.”

Despite the Judge’s strong condemnation of the manner in which Walsh was removed from the hospital, he upheld the Department’s right to transfer him to another post in the interest of restoring stability to the institution. Walsh’s application for leave to appeal the Labour Court judgment was this week granted. No date has yet been confirmed for the appeal.

This week’s letter expresses fears of similar action by union members and officials, with similar consequences, and pleads for protection from the Department against alleged intimidation.

The letter states that union members embarked on protest action Tuesday 18 June, toyi-toyiing outside the main administration building, and had planned to continue the protest Wednesday and Thursday 20 June.

In response to earlier questions from Grocott’s Mail, Department of Health provincial spokesperson Siyanda Manana said emphatically that no management staff would be forced out by unions.

“The workplace is an interracial place, therefore no union at Health has a right to rid the workplace of another race group. Our patients’ well-being is… paramount and the Department will not put their welfare at risk,” Manana said.

Nehawu officials on Wednesday told Grocott’s Mail they had yet to speak to the Democratic Nurses Association of SA (Denosa). Asked about representation from other unions representing staff at Fort England (Nupsaw, PSA and Hospersa), Soxujwa said he had no knowledge of their intentions.

“These allegations should be thoroughly investigated,” said Kruuse. “Until the process is completed, no action should be taken against those who speak out.”

Kruuse said all too often government departments failed to follow that process.

“I would encourage the whistleblower to also send the correspondence to the Auditor General’s office and the Public Protector, who are also empowered to receive such disclosures and investigate them,” Kruuse said.