‘Are we in our sober senses?’ 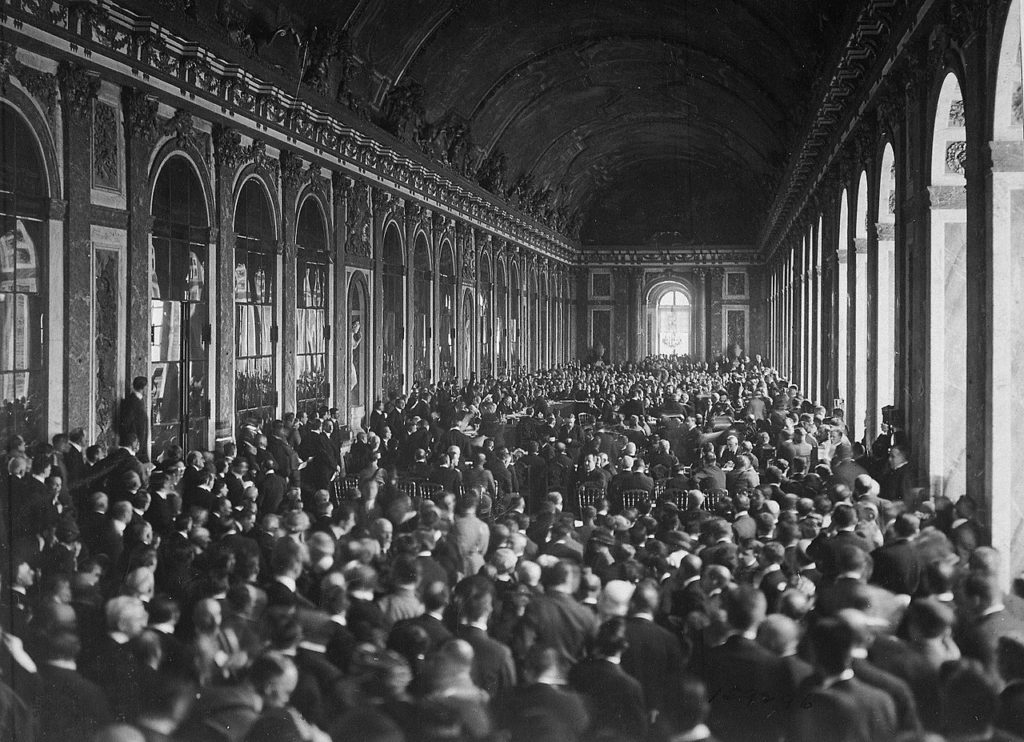 After the Armistice at 11am on 11 November 1918 brought the fighting to an end, the peace talks began in Paris in January 1919. Germany was excluded from the negotiations.

American president Woodrow Wilson had delivered a speech (known as the Fourteen Points) that declared the American peace objectives: the rebuilding of the European economy, self-determination of European ethnic groups, and above all, the creation of a powerful League of Nations that would ensure the peace.

French prime minister Georges Clemenceau had other ideas. France had lost 1.3 million soldiers, including 25% of French men aged 18–30 and 400,000 civilians. Clemenceau intended to ensure the security of France, by weakening Germany economically, militarily, and territorially.

Lloyd George’s British wartime coalition was re-elected at the end of 1918, with a policy of
squeezing the Germans “til the pips squeak”

Of the many provisions in the treaty, Article 231 required “Germany [to]accept the responsibility of Germany and her allies for causing all the loss and damage” during the war.

When faced with the conditions dictated by the victors, German foreign minister von Brockdorff-Rantzau replied to Clemenceau, Wilson and Lloyd George: “We know the full brunt of hate that confronts us here. You demand from us to confess we were the only guilty party of war; such a confession in my mouth would be a lie.”

Jan Smuts wrote to Lloyd-George, before the signing, that the treaty was unstable and declared: “Are we in our sober senses or suffering from shellshock? What has become of Wilson’s 14 points?” Smuts issued a statement condemning the treaty and regretting that the promises of “a new international order and a fairer, better world are not written in this treaty”.

But the Germans had no choice. The Treaty of Versailles was signed on 28 June 1919, exactly five years after the assassination of the Archduke Franz Ferdinand.

In Seven Pillars of Wisdom, T.E.Lawrence expressed the disillusionment at the results of the war to end all wars:

When we achieved and the new world dawned, the old men came out again and took from us our victory, and re-made it in the likeness of the former world they knew. We stammered that we had worked for a new heaven and a new earth, and they thanked us kindly and made their peace.

As part of the Fringe Festival this year, Another World: World War 1 Remembered will be presented at 7pm on 27-30 June at the NELM Auditorium. This presentation uses the poetry, letters and memoirs of well-known figures like Wilfred Owen, Siegfried Sassoon, Vera Brittain , Robert Graves, Olive Schreiner, Deneys Reitz and SEK Mqhayi, but also diary entries and letters written by ordinary men and women caught up in what Owen called “the War and the pity of War”. Special attention is paid to South Africa’s role in the war, particularly the fighting in German South West Africa and German East Africa, and the sinking of the S.S.Mendi.

The compilers of this presentation are Rohan Quince and Jeremy Fogg who were responsible for the production of the two-man show What the Dickens! on the NAF Fringe in 2017. In the presentation of Remembering World War I last year in the Film and Ideas segment of NAF 2018 they were joined by the well-known National Arts Festival personality Lynette Marais. These three are reunited in presenting the current production which has been modified to include the Versailles Treaty, signed exactly one hundred years ago.