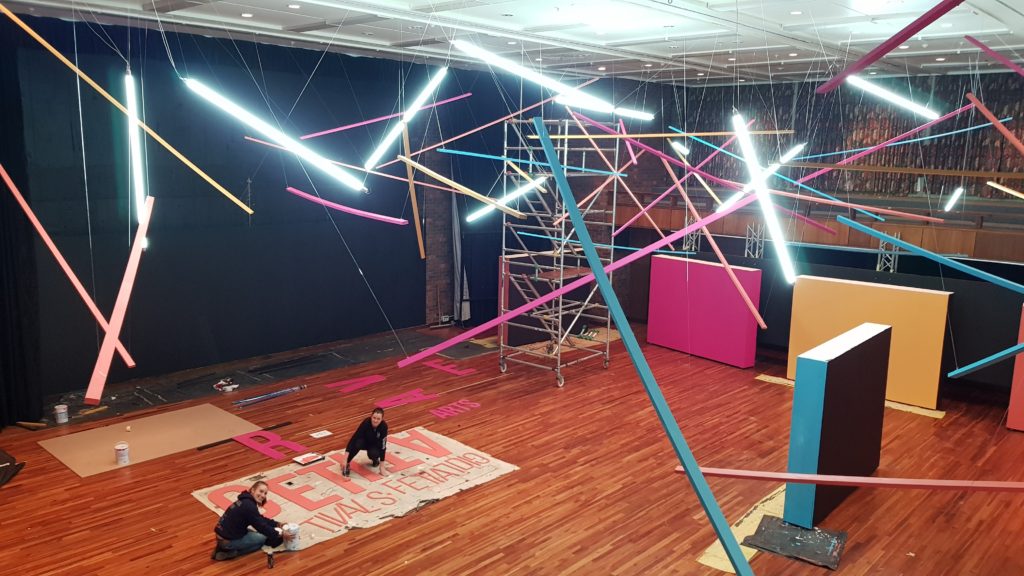 With the National Arts Festival (NAF) less than a week away, Makhanda (Grahamstown) is buzzing with excitement and busy with preparations for the largest arts festival on the continent. For the past two weeks you might have noticed the re-painting and cleaning of some of the streets, NAF posters on the street lights and a few more ‘changes’.

“What we’re seeing – once again – is a massive community effort from residents and the business community to prepare the City for our visitors.”, said NAF CEO Tony Lankester.

“Makana Revive have done a lot of clearing of verges and filling of potholes, and we know that a few small businesses are attending to the areas immediately outside their shops.”

Lankester said that the areas currently receiving more focus were the street lights along the N2, High Street, Fitzroy Street and other areas. In Makana Mayor Mzukisi Mpahlwa’s column in this week’s edition, he assures residents that the street lights were a top priority to ready the community for NAF.

Other focus areas included continuing clean-up efforts of streets and other areas of town.

“We are prepping the Village Green trading area at Victoria Girls, as well as the informal market in Church Square and getting Fiddlers’ Green ready for the Premiers Cup football tournament that we stage during Festival… as well as all our usual venues around town,” added Lankester.

“Our core venue team has been hard at work prepping and rigging the venues – blacking out the windows, building stages, installing the scaffolding, putting up lighting trusses and installing the curtains and sound. This weekend 200 technicians and venue operators arrive from around the country and they commence work on Monday, taking over the venues from the core team and building the interiors.”

In a press release earlier this week, Lankester said that water supply for NAF was a challenge, but plans were in place.

“The core focus has been ensuring a safe, sustained supply of water. We have suffered an ongoing drought which has put strain on the supply, exacerbated by an aging water system,” he said in the release.

“There is a long-term plan in place to upgrade the overall system, but we’ve had to think more short-term and put plans in place to make sure our visitors and residents are safe and comfortable during the Festival.”

Adding to this, Mpahlwa confirms in his column this week that Makana has put infrastructural measures in place to ensure uninterrupted water supply during NAF.

“The countdown to welcome our visitors has begun,” concluded Lankester.

“The stages, halls and galleries will be filled with great work and we think it will be more meaningful than ever to take a deep dive into the formidable creativity and innovation that South African, and international, artists will offer us this year. If you haven’t made your plans, it’s never too late: there’s always room for one more and nearby towns like Bathurst, Kenton-on-Sea and Port Alfred are all within a manageable distance to the action.”