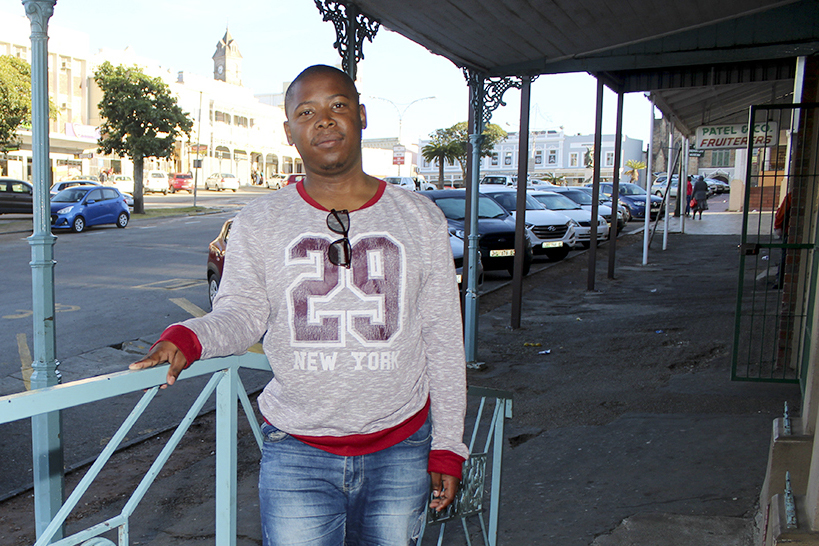 Wayne Plaatjies, based outside Dr Davies Optometrists, is on a mission to keep Bathurst Street clean and safe. Photo: Sue Maclennan

“What I want to say to the community is, please let’s try to keep this town clean. If we keep our places clean, then I don’t think crime will happen. More customers will come – you can’t expect customers to come to your business when there’s dirty things lying outside.”

Wayne Plaatjies is on a mission to help make Bathurst Street a place that people want to visit – and do their shopping. Five days a week, several times a day, he’s doing clean and safe patrols along the length and breadth of one of Makhanda’s busiest streets, with the backing of entrepreneur Trevor Davies.

He’s one of two clean-and-safe ambassadors on the beat through a new project in its trial phase that could see safe and clean zones take hold across the city’s streets during the next few months. Dr Davies Optometrists is one of several businesses that are taking back the Bathurst/ Dundas Street precinct, in order to give it back to pedestrians and shoppers.

It’s no coincidence that people walking to and from the CBD, or driving to do business in the area feel comfortable outside Dr Davies, PG Glass, Hyundai, Tyremart, Rent-All, Connocks and the new Pick n Pay convenience store/ Caltex complex. For a start, all keep the areas outside their shops clean. Then, from clean-and-safe ambassadors to new paving, fixing potholes, painting fresh road markings, maintaining the centre islands, lighting and security cameras, they’re all going the extra mile to turn no-go zones into do-come-in spots.

Plaatjies is one of the pioneers in a collaboration between local businesses, the community policing forum and the South African Police Service driven by Rhodes University Economics Doctoral candidate, Lowell Scarr.

“It’s still quite early days,” Scarr told Grocott’s Mail in a telephone interview. “We’re still figuring out what’s going to be the best formula. We’re looking to provide a professional dedicated parking attendant service and potentially brand ambassadors. It’s not security but rather keeping the area clean, dealing with customers and providing assistance and advice.”

Scarr’s research is on supporting early stage enterprises in a rural context, and finding a structure for informal car guards that works for them and which the public and businesses can put their trust in is what he’s focused on.

Along with Davies, Hyundai’s Steven van der Merwe and PG Glass’s Tim Dold are among those who support the idea and are paying for the service.

“Instead of telling other people what to do, just start where you are and make an impact there,” says Davies.

“The municipality is going to do what it’s going to do. It’s unrealistic to think we’re going to influence them by either criticising them or helping them. That’s a different debate and each person must have their own take on that. But ultimately, we are in no position to tell them what to do.

“In a municipal environment that is often difficult, because it is the municipality’ work to do those things. But despite what everyone says, we’ve got a very good relationship with the municipality. They’re not being ‘difficult’. I think they’ve realised their inadequacies and they’re very happy to work with individuals to sort out their own stuff. There is a sense from them that if you’re prepared to do it, then please go ahead and thank you.”

* We previously incorrectly referred to Sue Webber as Leonie Webber – we apologise.

It’s all very well having the vision, but it takes someone to implement it. And that’s where Plaatjies steps in. “We’re trying to get people to see that their shop doesn’t end at their shop window,” Plaatjies says. “For people to take responsibility for their own areas.”

“We can’t pretend we’re 100% successful – there are still areas where we come in on a Monday morning and look and just say, ‘Nooo!’” Davies says. “But that’s where Wayne’s attitude comes in. He says ‘Doc we need to sort this out,’ and within half an hour, it’s just sorted, and that’s never a hassle.”

The cleaning side is just part of the vision.

Safety is another important aspect of what Plaatjies does. Because he’s on the street, he knows who’s up to no good.

“In terms of crime, we almost don’t have any,” says Davies. “We did have a challenge initially with rogue car guards – people who would throw on a car guard bib and demand money from people – but they see it’s not going to work and they go.

“Bit by bit, we’re taking back Bathurst Street. A miracle happens when people start to do rather than complain.”

Why bother with Bathurst Street?

TELL US ABOUT IT PLEASE!
This is the first in a five-part monthly series on urban renewal in Makhanda. If you have a precinct or project you think we should tell the community about, please email community@grocotts.co.za with Urban renewal in the subject line.