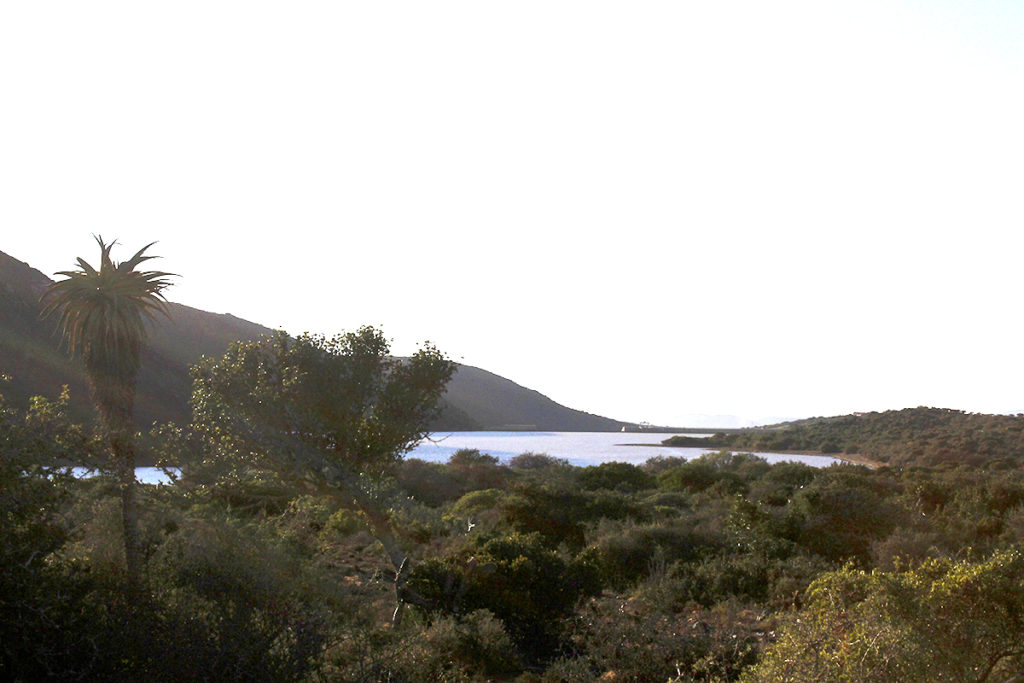 Glen Melville Dam, the storage reservoir for water from the Orange River that is Makhanda (Grahamstown's) main supply. Police are investigating suspected sabotage at the water treatment works and main storage reservoir that it feeds. Photo: Sue Maclennan

Makana Municipality is working with the South African Police Service to register Makhanda’s main water treatment works and largest storage reservoir as critical infrastructure. This comes as police investigate suspected sabotage at the James Kleynhans Water Treatment Works and Botha’s Hill reservoir that resulted in massive water loss and prolonged outages in the city’s eastern and high-lying areas. Meanwhile water production at James Kleynhans is back to full capacity of 13 megalitres a day; however, the water supply from Waainek Water Treatment Works west of Makhanda remains critical and the end of that limited supply may be as little as 10 days away.

“The draining of Botha’s Hill reservoir resulted in no water being available to the high lying areas in the East . The pump failure at James Kleynhans has resulted in a decrease in the output of the plant to approximately 5 megalitres a day, less than half of the 13 megalitres it was previously providing,” the statement on 6 June, signed by the Mayor, announced.

While the reservoir was refilled, continuing repairs at James Kleynhans meant high-lying areas were without water for several days and water deliveries were implemented.

There was a further setback when the unauthorised opening of a valve at Botha’s Hill on Tuesday 11 June meant a further delay in restoring the supply. On 13 June, the Mayor issued another statement thanking Amatola Water, the National Arts Festival MBB Consulting, Rhodes University, the Municipal Infrastructure Support Agency and the Department of Water and Sanitation for stepping in.

“Internal investigations could identify operational and staff issues that contributed to the water interruptions,” Mpahlwa said. “Where staff members were involved, disciplinary processes were instituted and improved controls were initiated, including spot checks.

“Working with SAPS an investigation is under way as deliberate acts of sabotage are suspected.”

In response to a query from Grocott’s Mail about measures to protect the town’s infrastructure from future sabotage, the Makana Communications Office said, “The Municipality is working with SAPS to register Botha’s Hill Reservoir, James Kleynhans WTW and Waainek WTW as [critical infrastructure].”

The Critical Infrastructure Bill, passed in its amended form by Parliament in March this year, now awaits signing into law by President Cyril Ramaphosa. It replaces the controversial apartheid-era National Keypoints Act. It allows the Minister of Police to declare certain installations ‘critical infrastructure’ and to determine how these will be protected in the interest of national security.

While most dams and water treatment works in Gauteng and the Free State were listed under the previous Act as National Keypoints, no water infrastructure in the Eastern Cape was registered for this special protection. Infrastructure that is registered includes the SABC in Port Elizabeth and Bhisho, the Bhisho legislature and former President Mandela’s Qunu Village residence.

Immediate measures to secure Makana’s supply, according to the Makana Communications Department, was that a casing was manufactured and installed on Thursday 6 June to protect the valve at Botha’s Hill.

“Other measure like changing the valve head is also under way,” the Communications office said.

“This will ensure that opening of the valve cannot happen without the proper tools/equipment.

“Improved security in terms of using a security company is being discussed. It is important to note that this will be a costly exercise. Internal investigations have been launched to address all issues in terms of staff or other operational issues.”

According to Makana Communications, James Kleynhans was producing 6 megalitres a day with one pump in operation.

“Since yesterday (Wednesday 12 June) two pumps are operational and water production is back to normal, i.e. 13ML per day.”

On the rain-reliant supply from the west, Howieson’s Poort was at 16.4% and Settlers 7.6%.

“It should be noted that the dam level at Howieson’s Poort is at a critical level. The pumps could start cavitating in 10 days. Residents must use water sparingly.”

VANDALISM AT BOTHA’S HILL SINCE 2015