K-DAY: Ready to rise to the occasion 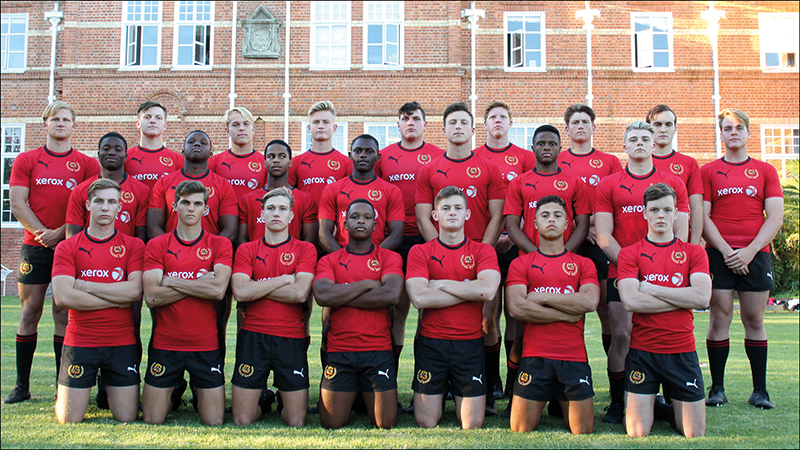 The Kingswood College 1st XV had a very good start to the year with five consecutive wins in the first five fixtures played against Pearson, St John’s College, Parktown Boys, Dale College and Kearsney College. The team struggled in the next few festival games and narrowly lost against Hilton College, SACS, Maritzburg College and Hudson Park in the first regular season games. Since then the team has regained confidence by scoring a number of big wins. We enjoyed a tough build-up to K-Day with a fixture against Framesby in PE.

The 1st XV team has focused on defence, hard work and on making the most of ball possession. We understand that we do not have the luxury of depth in our arsenal, so we need to make sure that we are always working on our weaknesses and polishing our strengths. We are building a culture in which players want to be part of a team and in which they are prepared to work hard to earn their position in the team.

A core group of players have returned from last year including our inspirational captain, Jack Mills, Abo Klaas, Josh von Holdt, Jordan Lombard and Nick Lawson-Smith. The new players in the team have added great value and we are hoping that we will be able to rise to the occasion on K-Day against a very good St Andrew’s side.

The team is made up of a mixture of junior and senior players and experienced and less experienced players. The bond among the teammates is strong and they have journeyed together, forming a tight and impressive relationship. Players are positive, work together and protect and respect each other. The willingness to help, support and to give each other positive feedback, is amazing.

The team’s strength is its incredible speed and versatility. Ninety percent of these players can be moved around to play in different positions. This is what makes the 2019 team different from all the teams I have coached at Kingswood, since 2012.

A number of the Kingswood first team squash players have been together for some years; many of whom have been competing together for EP squash since U11. This will also be the last K-Day matchup for seven of our 12 players and it is therefore fitting that they should play on their home court. Led by Veer Bills (boys) and Caitlin Bell (girls), the Kingswood squash players are excited to represent their school in the first of this year’s 125th K-Day matches.

The Kingswood 1st team girls hockey has enjoyed a good run over the past month and has displayed great continuity and teamwork both in defence and attack. Kingswood is fortunate to have some excellent players and the team functions as a coherent unit.

We have a wide variety of talent with some strong defence players in Bridget Mildenhall, Taya Trivella, Robyn Koch and Kirsty Wicks. Our attacking strength is bolstered by Amy Mills, Zinathi Mbenyana, Qhayiya Noguduka and Megan du Preez. We are greatly looking forward to K- Day this year as it is an event that stays with the girls for years to come.

The Kingswood 1st boys have battled valiantly this year with constant disruptions throughout their season.

Their strength against St Andrew’s would have to be their spirit and determination as they will be facing an excellent team.  Where they have played well this year, they played simply and unselfishly working towards 1 or 2 simple game goals. This augurs well for a considerable challenge on Saturday.

Previous ArticleK-DAY: The power of sport
Next Article Brookshaw Thank You