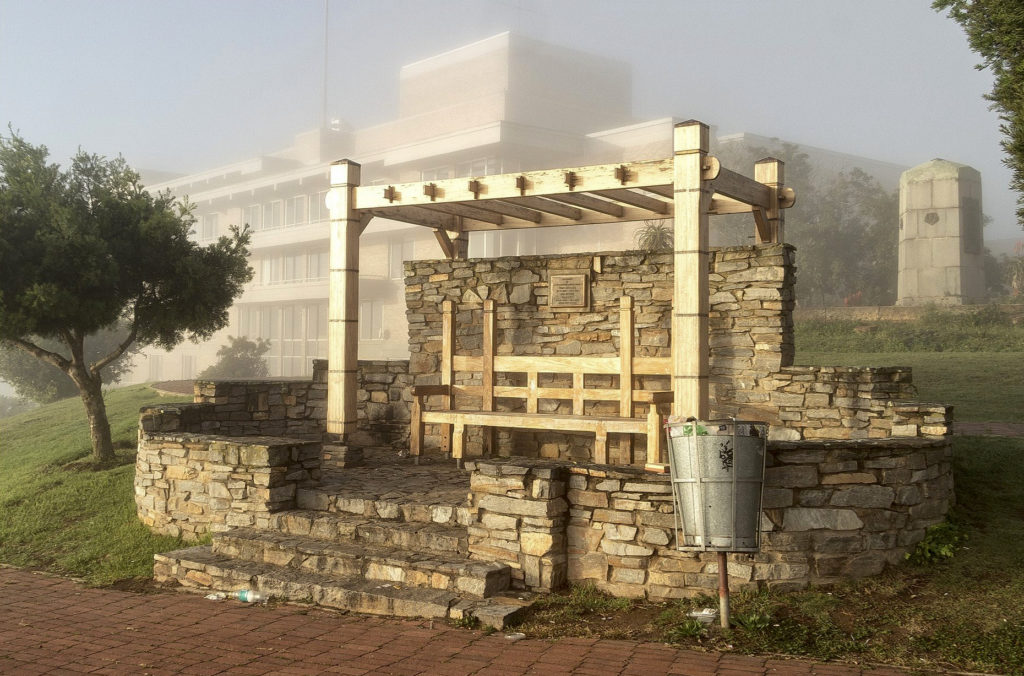 The bench below the Monument dedicated to Andrew Bowker's grandparents, Tom and Gladys Bowker. Facebook banned Andrew for a month after comments he posted about the Monument name change. Photo: Simon Pamphilon

“If I could rewrite that part I would definitely have toned it down a lot.” These were the words of Kasouga resident Andrew Bowker, whom Facebook has banned for 30 days after he used that platform to vent his outrage about the proposed Monument name change. The Grahamstown Foundation, which manages the building, has meanwhile reinforced its commitment to free speech. It has called for citizens to continue engaging in discussions about the name change, but expressed concern over the tone and content of some of its critics.

A Settler descendant, Bowker is the grandson of the late Tom Bowker, MP for Albany in the 40s and 50s who helped raise funds to erect the building.

An advertisement in the 24 May edition of Grocott’s Mail announced that in line with its resolution to redefine the purpose and function of the 1820 Settlers Monument, the Grahamstown Foundation is calling for proposals for a new name. The move is based on a drive to make the building, and the organisation, more inclusive.

Bowker was among a number of people who took to social media to express their fury. Determined to share his heartfelt opinion, he made statements he says he now regrets. A Facebook string under his original post was replete with military metaphor, apparently referencing the military history of the region. In this context was the suggestion that the Board of the Grahamstown Foundation were traitors and as such should be shot. He used an image by Simon Pamphilon to illustrate his post.

Pamphilon was outraged by the use of his photograph without permission, particularly in the context of Bowker’s vitriolic views, and turned to Facebook to intervene.

Pamphilon frequently posts photographs publicly on social media and told Grocott’s Mail he takes no issue with people sharing his work. However, Bowker had copied and posted two of the images on his own newsfeed without Pamphilon’s permission.

“It’s a clear breach of copyright,” said Pamphilon, who posted his objections on Facebook early morning Monday, 3 June. Pamphilon said he had not given permission for Bowker to use the photograph, nor did he support Bowker’s accompanying comments. Pamphilon reported the posts to Facebook on Sunday night and received confirmation that the issue had been resolved the following morning.

“If his comments were defamatory then one could go after everybody who shared the comment, as that would constitute republishing in each case,” said Pamphilon, who is a lecturer in the School of Journalism and Media Studies. “I’m not sure of the legal implications of sharing violent comments.”

In a statement issued on 4 June, interim chairperson of the Grahamstown Foundation Ayanda Mjekula said, “The Foundation has spelled out its rationale and motivation for the name change and intends engaging deeply with all of the submissions it receives, including those that argue for the retention of the current name of the building. Such conversations will be held in good faith, and Council is determined to canvass all views before arriving at a final decision.

“In that context, and in the interests of continuing the process in a constructive manner, Council also wishes to note with concern the tone and content of some critics of the proposed name change. It is our view that free speech is absolutely permitted, and to be encouraged, in our democracy, and is essential to move our country forward. So too is robust and considered debate and reflection.

“Equally, though, hate speech, incitement to violence and harassment is contrary to the Bill of Rights and is not acceptable to most South Africans. Where such is encountered, Council reserves the right to refer such speech to the South African Human Rights Commission for further investigation and, if they deem it necessary, action.”

Bowker said he would avoid social media from now on. Talking about his 30-day ban, he said, “You can’t post – there’s bugger all you can really do. Once I‘m out of [Facebook] “jail” I’m going to tell all my friends that I’m off Facebook. There are more negatives to it than positives. I’m 69 now and frankly I don’t need any more s**t.”

He said he wasn’t sure why he’d been banned from Facebook. “I just know that I’ve infringed their rules and regulations.”

“It could have been a fellow that I upset by using his picture,” Bowker said. “I phoned him and apologised. I said I didn’t know your picture was protected. I had it there and I used it. Nobody told me [it was copyrighted]. I only discovered afterwards.”

Of the shooting comment, he said, “It was more of a [metaphor]. If I could [post something]now, I would apologise and ask for understanding. When I was told about the name change I was shocked. If I’d thought about it more, I would have used the words “extremely disappointed”.

Explaining why he’d reacted so strongly to the news, Bowker said, “I felt we were losing something that was promised to us. I felt I could never keep quiet about this. Had I done or said nothing, I would have felt I had betrayed my grandfather.

“I’m a simple Settler,” he said. “I possibly haven’t been very civilised about this but if I could, I would ask for understanding. I’m not that kind of person.”

The Council of the Grahamstown Foundation, in October 2015, passed a resolution to proceed with the renaming of the 1820 Settlers Monument. Since then, various discussions and consultations have taken place, leading to a public call for submissions being made in May this year.

“The Grahamstown Foundation has embarked on an inclusive, public process of engagement and it is heartened by the many supporters of the vision to develop a building that – in both name and ethos – serves our City and country and remains true to our core constitutional values,” Mjekula said.

“The Foundation has spelled out its rationale and motivation for the name change and intends engaging deeply with all of the submissions it receives, including those that argue for the retention of the current name of the building. Such conversations will be held in good faith, and Council is determined to canvass all views before arriving at a final decision.”

The nifty “share” feature on Facebook allows users to share photos, videos or texts even when they didn’t create it themselves; however, this feature ensures that the original creator of the content is never left out of the picture. This protects the intellectual property rights of the post’s original creator.

On the flip side, saving a photo, video or piece of text that isn’t yours, and uploading and posting it like it is, is an infringement on the creator’s intellectual property rights and against copyright law.

Facebook’s copyright guidelines are pretty simple: unless the content is yours, or you have written permission from the creator, or the post falls outside of copyright law, don’t post it. This is why the “share” feature is there- to ensure copyright is protected and credit remains where it is due.

Facebook’s Community Standards on “Violence and Incitement” are also very clear on not permitting any content that contains a threat that may lead to death, or constitutes a call for high-severity violence, or advocates for such violence. Should a post violate these Standards, Facebook can remove the content, disable the account and even get law enforcement involved. – Kathryn Cleary

To join the discussion, go to the Foundation’s website www.foundation.org.za

Previous ArticleChild Maintenance: how to apply
Next Article It’s cold! How you can help…