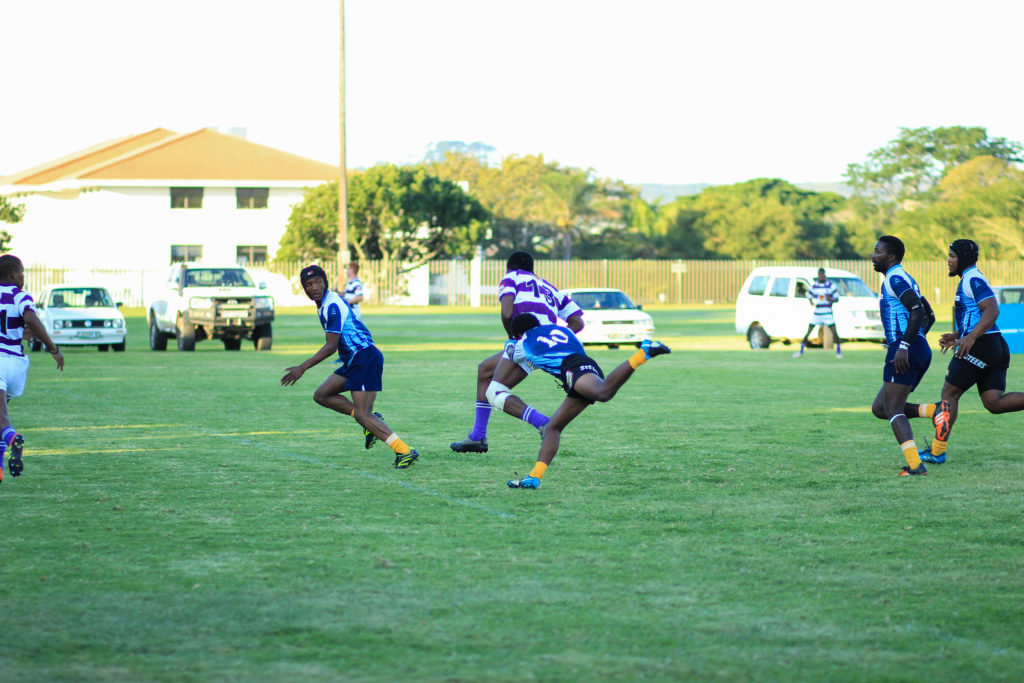 The Rhodes Outside Centre running into contactThe Rhodes Outside Centre breaking a tackle.
There were impressive wins last weekend in the 6th round of the EPRU SEDRU Regional League at Rhodes and the Oval. On Friday night Old Collegians continued their unbeaten run with a win over the struggling Winter Rose, while Rhodes trashed Easterns and Lily White and outgunned log leaders Klipfontein United on Saturday.
Despite their defeat, Klipfontein still managed to hang on to their top position on the overall log standings. Old Collegians moved up to second position, with Easterns and Lily White occupying third and fourth respectively.
Rhodes vs Eastern
Rhodes Rugby Club Stallions recorded a valuable 60-36 bonus point win over a spirited Eastern side at Great Field on Saturday. Eastern also walked away with a bonus point try for scoring four tries.

Rhodes started off well, but became complacent after scoring two quick tries in the first half. The game was evenly matched with both teams coming hard at each other. Eastern fought back nicely and looked dangerous on attack. Rhodes played with more eagerness and urgency in the second half that saw their forwards dominated up front. Both teams should be credited for the way they executing their attacking play, which proved to be a high scoring and entertaining game of rugby.

“After scoring two quick tries, we thought it was an easy game to win. But it’s important to highlight the brilliant attack from Eastern as they took the game to us, and we had no answers. We ticked a few boxes that we were meant to tick earlier approaching halftime. Our boys came out with more aggression and the will to win as Eastern had no answer for our forwards. But I must say, Eastern gave us a good game and they are a team to watch in the future,” said Rhodes Head Coach, Qondani “Carlos” Katywa.
Lily White vs Klipfontein United
Lily White were on fire at the Oval against the log leaders Klipfontein on Saturday. They notched up an outstanding bonus point 30-13 win, with their speedy and exciting young backline that was on song. Both teams provided entertainment and it was a very hard physical encounter. Lily White took their chances and put points on the board on the visitors’ mistakes. Deon Gunn and Linton Rhodes scored their team’s only two tries, while Lily White crossed the try line on four occasions.
Viren Cook of Klipfontein said it was a high-tempo game with both teams giving the ball light and launching attacks. “Handling errors cost us today and the home side neatly capitalised,” Cook said. “The game was very nice and was played in a very good spirit. The score is not a true reflection what happened today on the field, as it could have been different. But all credit to Lily White who took the chances afforded to them.”
Old Collegians vs Winter Rose

OC continued their unbeaten run and moved up to second position on the overall log, with a 12-3 win over the struggling Winter Rose. Enrico “Tala” Roberts was the dangerman for OC and scored two brilliant tries. OC, known for, playing at a high pace, put the visitors under pressure from the outset. Their young backs attacked with purpose, resulting in territorial advantage and possession. Winter Rose made too many enforced errors and couldn’t not find the momentum to come back in to the game.

“It was a very hard and intense game where we are happy to take the win,” said OC’s Siyabonga Mahapi. We did not pick up that all important bonus point but we are satisfied with the win. We had not many scoring opportunities, with Winter Rose’s defence closing us down.”
Kowie United vs Ndlambe Tigers
Kowie quickly wrapped up their encounter against the newcomers with a bonus point 47-12 win. This Port Alfred Kowie Derby was as expected hard, physical and very exciting. The experience of the Kowie side proved the difference: Kowie scored seven tries and were dominant from the outset. This was indeed a confidence booster for them going in to their coastal Ndlambe Derby against Klipfontein this weekend in Klipfontein.
*Swallows received a soft point against Wanderers who didn’t pitch up for their fixture at the Oval.
This weekend’s fixtures:
Klipfontein vs Kowie United
Eastern vs Lily White
Winter Rose vs Rhodes
Wanderers vs OC
Swallows vs Ndlambe Tigers
Previous ArticleHappy Birthday Amakhala!
Next Article Makana team muscles in on regional contest