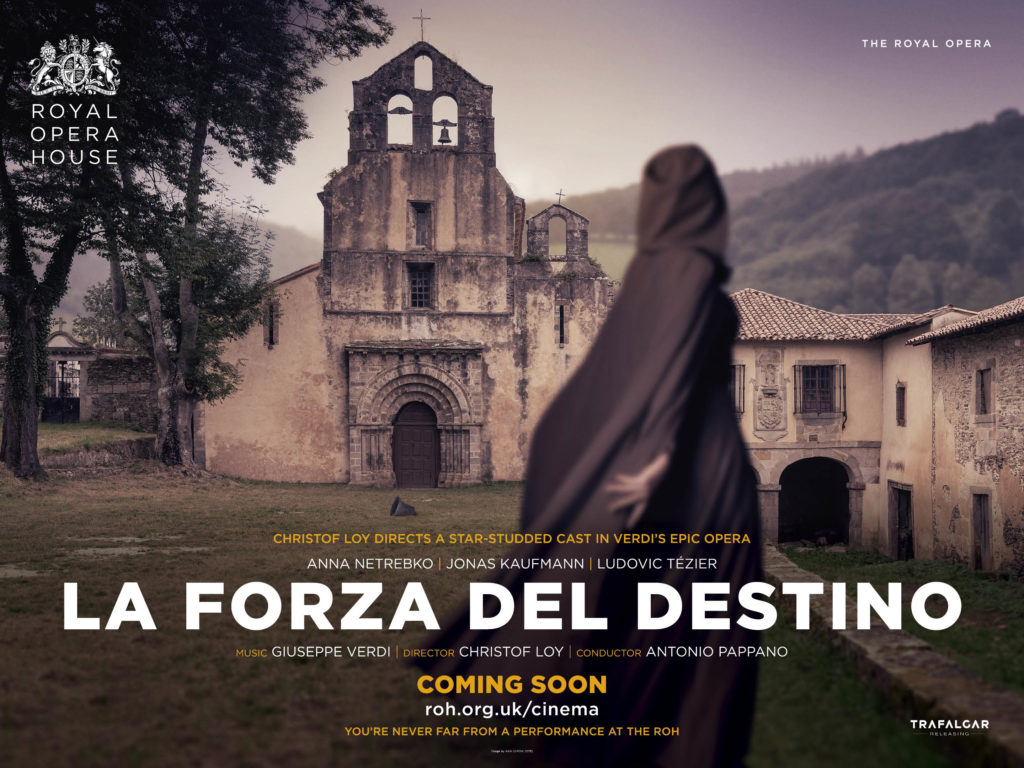 Nebula Productions and the National Arts Festival are delighted to be able to present a dash of ballet, a sprinkling of opera and a measure of Shakespeare on our big screen in 2019. Please diarise these dates – all screenings take place in the Olive Schreiner Hall in the Monument and start at 6pm. Tickets are R75 for adults and R65 for students, children and pensioners. Movie Club members get a R10 discount so bring along your membership card.

After the screening of La Traviata, which provoked tears amongst some in the audience, we screen another emotional tale this week with La Forzo del Destino on Friday 17 May at 6pm.

La Forza del Destino features a starry cast including Russian soprano Anna Netrebko as Leonora, German tenor Jonas Kaufmann as her lover Don Alvaro and French baritone Ludovic Tézier as her brother Don Carlo di Vargas. The conductor is The Royal Opera’s Music Director Antonio Pappano and the director is the award-winning Christof Loy. The opera is one of Verdi’s most ambitious scores, featuring intense arias such as Leonora’s ‘Pace, pace, mio dio’, ravishing ensembles and stirring choruses such as the ‘Rataplan’ chorus in Act III.

The story follows lovers Leonora and Don Alvaro who attempt to elope but are caught by Leonora’s father, the Marquis of Calatrava. In the ensuing altercation Don Alvaro accidentally kills the Marquis, who curses his daughter as he dies. Don Carlo di Vargas, Leonora’s brother, is determined to avenge his father’s death, but unknowingly becomes a close friend of Don Alvaro when both men join the Spanish army under false names.

Eventually Don Carlo discovers Don Alvaro’s true identity and challenges him to a duel. Don Alvaro escapes, but some years later Don Carlo tracks him down in a Spanish monastery where, unknown to both men, Leonora is living reclusively as a hermit. Will Carlo finally take
his revenge?

During Festival, watch out for the opera FAUST and the RSC production of TAMING OF THE SHREW.

In addition to these titles, the Festival has obtained copies of the RSC screenings of several Shakespeare plays that are part of the 2019 and 2020 matric syllabuses. These titles include Macbeth, Hamlet, Antony and Cleopatra, Twelfth Night and Romeo and Juliet. Schools and any other interested groups should contact kate@nationalartsfestival.co.za to enquire about screenings of these films at a time suitable to them. Cost per learner or student will be R40, attending chaperones or teachers will not be charged.

These are screenings of staged productions from the UK – they are all around 3 hours long (with intervals) and there are fascinating behind-the-scenes interviews as well. We can only keep screening these films as long as we have decent audiences – if we don’t get audiences, we won’t be able to continue with these screenings – so please, spread the word!