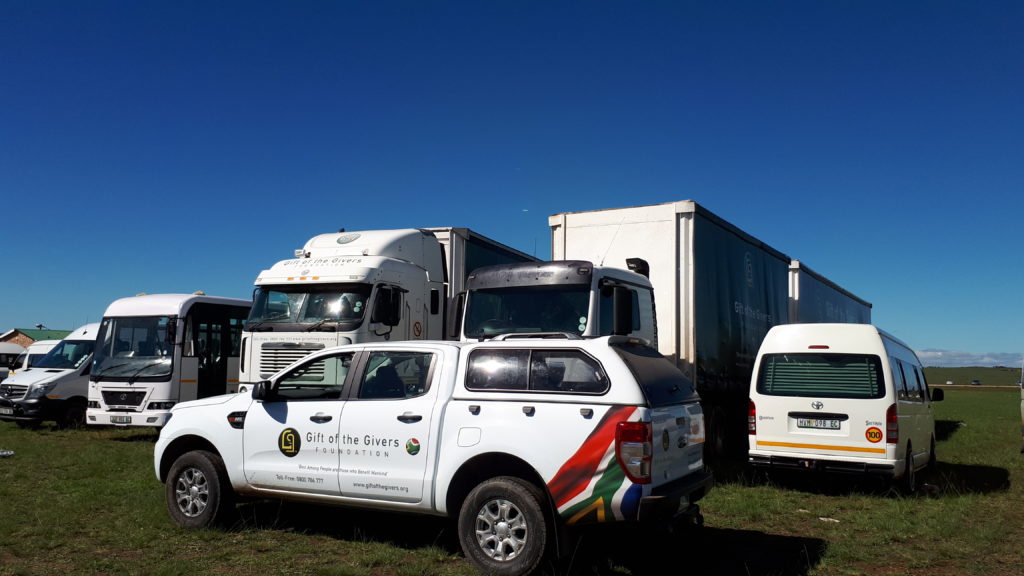 Gift of the Givers trucks at the national Freedom Day event at Miki Yili stadium in Makhanda (Grahamstown) on 27 April 2019. Photo: Sue Maclennan

By SUE MACLENNAN and KATHRYN CLEARY

DWS, Makana respond to Gift of the Givers uproar

The Department of Water and Sanitation says it will continue to support Makana in ensuring water security, as well as other areas such as the operation and maintenance of its water treatment works. This comes as humanitarian relief organisation Gift of the Givers announced their immediate withdrawal from the municipality, along with the Jojo tanks, filtration systems and water tankers they brought in to relieve the municipality’s water crisis.

A message from Giver’s Project Manager Ali Sablay shortly before midday on Wednesday 15 May had residents and officials lining up outside Municipal Manager Moppo Mene’s door, confused and alarmed. The message stated that the Gift of Givers would be leaving Makhanda (Grahamstown) with immediate effect, following a lack of promised compensation for their drought relief efforts.

A subsequent statement by Gift of the Givers founder Dr Imtiaz Sooliman stirred outrage generally, but among Makhanda residents in particular. Sooliman said the organisation was leaving Makhanda as a matter of principle, because the Department of Water and Sanitation would be paying three companies R10 million for work already carried out by Gift of the Givers. He said an agreement for the organisation to be compensated for its work with drought relief funding from the Department of Water and Sanitation (DWS) had been reneged on.

Makana was allocated R22 million in drought funding by DWS to explore options for groundwater, as well as other interventions. The municipality has responded at length on its website (bit.ly/GrocMakanaGoG), affirming its appreciation for Gift of the Givers’ emergency relief during the city’s water shortages, expressing concern at the organisation’s public statements and explaining its legislative constraints when it comes to allocating contracts.

The Department of Water and Sanitation has also responded, saying Makana had received the funding and was responsible for how it was spent. The Department distanced itself from any agreement between the municipality and Gift of the Givers.

Both Makana and the Department expressed gratitude to the organisation, and emphasised the constraints imposed by legislation that governs how state entities appoint service providers.

Government watchdog the Public Service Accountability Monitor (PSAM) has also weighed in on the issue, saying that transparent contracts and better communication would have helped Makana avoid the furore which has made national and even international news.

In his statement, Dr Sooliman speaks of his frustration at having to jump through the hoops of government bureaucracy, while a serious humanitarian crisis was unfolding in Makhanda.

The Gift of the Givers arrived in Makana Municipality on 12 February at a critical time, when poor maintenance had rendered the main eastern water treatment works inoperational, and drought had left dams on the west critically low. Some residents were without water in their taps for close to two weeks.

The organisation delivered clean drinking water to local and rural communities daily, drilled 15 boreholes, tested the water quality of the boreholes, and installed Jojo tanks in communal areas as well as schools.

The Makana Council resolved in January 2019 to have the municipality declared a disaster area; however, Council documents indicate that the Sarah Baartman District had already submitted an application for the district to receive disaster status – and the funding that comes with it.

Grocott’s Mail interviewed Department of Water and Sanitation (DWS) provincial head Portia Makhanya on the eve of Freedom Day about the drought-relief funding, and how it would be used. In particular, we asked about the role of Gift of the Givers in drought relief efforts.

“Government has always planned for groundwater development, but dealing with the public purse, you have to go through Treasury approvals and other Public Finance Management Act regulations,” Makhanya said in the 26 April interview.

“The plan is there, the money has now been released and is with the municipality. We now need to finalise those groundwater connections. The boreholes drilled by Gift of the Givers – such as the one at Ntsika – is currently the backup system should anything go wrong.”

“Gift of the Givers came at a critical time when we had huge operational failures at both east and west water treatment works,” Makhanya said at the time. “They have drilled 15 boreholes across Makana. Not all are equipped but the collective volume of all those boreholes is two megalitres per day according to reports from them.”

“Every drop counts and it came at a time when it was urgently needed – but that cannot be sustained: we need to look at ‘How do we get out of this crisis – now and beyond the drought?’”

National spokesperson for DWS, Sputnik Ratau in a statement issued on Thursday 16 May, said, “The Department fully appreciates the amount of work done by the Gift of the Givers in the area and believes that the drilling of boreholes will go a long way in assisting government’s efforts to avert shortages of water for the community of Makhanda.”

However, he said as per the Public Finance Management Act (PFMA) and other relevant legislation, the department’s responsibility, in areas classified as disaster areas, was to allocate Drought Relief Funds to the affected Municipality.

“To this end, the Department of Water and Sanitation has lived up to this responsibility by transferring an amount of R22 Million to Makanda Local Municipality for the sole purpose of assisting them to deal with drought challenges in the area. The manner in which that money is spent is the responsibility of the concerned municipality and the department does not dictate or interfere with how that money is spent and which service providers are used,” Ratau said.

A subsequent statement issued by the Makana Communications Department, read, “We wish to reassure the public that engagement with the Gift of the Givers is ongoing… Their announcement was made in the midst of those discussions and is, we believe, unfortunate in that the statement seems to be an attempt to influence those discussions and, further, is contrary to the positive spirit of engagement we’ve enjoyed with Gift of the Givers to date.”

Makana explains the processes required for them to spend grant funding.

“In October 2018 the national Department of Water and Sanitation informed us that they would assist drought relief efforts by funding the drilling of boreholes… in line with the Municipal Finance Management Act and the conditions of the grant, a proper process was followed in appointing a consultant as the first step.”

The consultant would complete an underground water study and register the boreholes already drilled.

“The tender was awarded following a proper and lawful tender process, to undertake the necessary environmental impact studies and assessment of the aquifer to determine the viability, scale and scope of drilling boreholes.”

Before the release of the grant, Gift of the Givers had arrived in Makana and started drilling boreholes based on their own assessment of the situation.

“DWS has since informed us, and we agree, that in terms of the relevant legislation and standard government processes, proper regulations must be followed in considering any funding to Gift of the Givers,” Makana said. “We need to follow these processes so that we do not flout supply chain regulations and give rise to audit queries.”

The Municipality was considering appointing a service provider through the correct supply chain management regulations to connect the Waainek boreholes to the water works.

“It is crucial to augment the water supply to Makhanda West. This is where serious intervention is needed as a result of the drought,” the statement said.

The information from DWS about the breakdown of payments to three other companies, to do work the Gift of the Givers considered they’d done had been the last straw for the organisation.

“They said… a private consultancy will be paid R1.2 million for work related to boreholes (we did the consultancy work, drew up a plan to save the city and sited the boreholes), another company will be paid R7 million for boreholes (which we drilled) and a third company will be paid R1.9 million for electrical work to connect boreholes which we drilled at Waainek (and which we have not be compensated for) to the treatment plant,” Dr Sooliman said. “This is R10 million of taxpayers money handed out freely by the government to people as remuneration for work that Gift of the Givers did. Our hearts are with the people of Makhanda, the elderly, the women and children and everyone who waited so patiently for water but as a matter of principle we cannot continue.”