What the elections mean for us 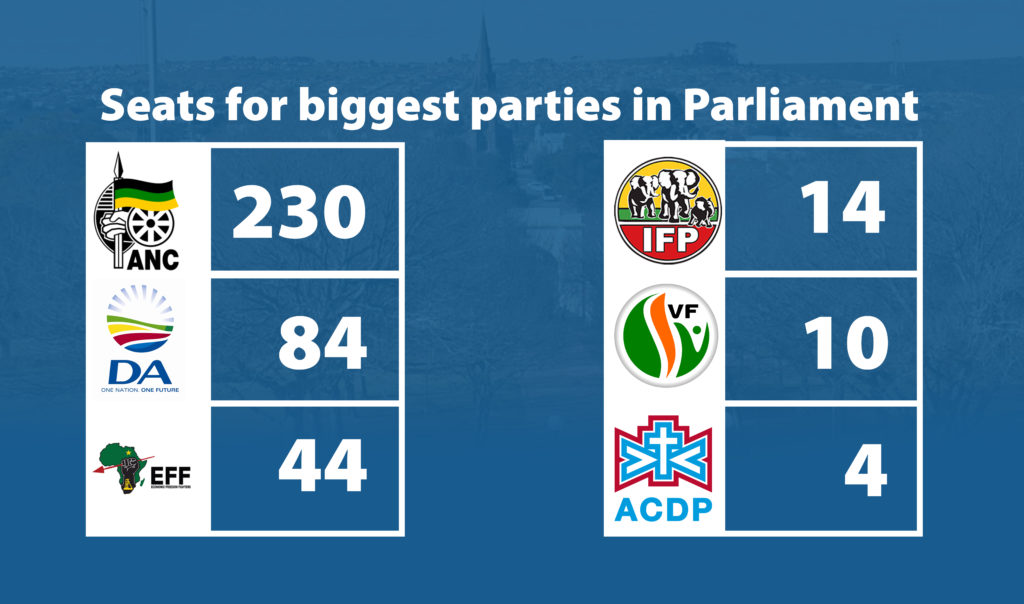 Seats for the six biggest parties in Parliament. What do the election results mean for Makana? Graphic: Azlan Makalima

Spin doctors in the major parties are working overtime trying to put a positive spin on last week’s national and provincial elections. Famously, African National Congress (ANC) election head, Fikile Mbalula said the ruling party avoided ‘a slaughter’ at the polls in part thanks to party leader Cyril Ramaphosa. It was easy to make such a statement because it cannot be tested so we don’t know if it might have been true or not, but many analysts would agree that the President probably boosted the ANC’s performance.

The sub-text is that Ramaphosa appears to have salvaged some of the party’s credibility that his predecessor had demolished in a plague of corruption, nepotism and incompetence.

Political aides at the Democratic Alliance (DA) also tested their creativity acknowledging that the party had suffered a setback but affirmed that it had not lost as much support as the opinion polls had predicted. That of course depends on which opinion poll they were referring to.

Conversely, the Economic Freedom Fighters (EFF) is thrilled with its very substantial gains, even though they were not as dramatic as the opinion polls conducted earlier in the year had indicated.

Superficially it does not look like the composition of the National Assembly will change very much. The top four parties remain in the same order as before and together they received about 92% in both the 2014 and 2019 elections. Changes in the support they received relative to each other were noteworthy but not astonishing.

In the sixth democratic Parliament, due to be sworn in on 22 May, there will be representatives from the 14 political parties who received enough votes for a seat. This means the ANC will have 230 seats; the DA 84; the EFF 44; Inkatha 14; Vryheidsfront Plus 10 and the ACDP four seats.

General opinion is that the elections showed Ramaphosa to be strong enough to push through the reforms needed to repair much of the damage that beset this country in the last decade or so.

In the Eastern Cape

President Ramaphosa has already named the Premiers who will take office in seven of the eight provinces that his party will govern. Not surprisingly, ANC Chairperson in the Eastern Cape, Oscar Mabuyane will take over as Premier from Phumulo Masualle.

In the Eastern Cape, the African National Congress lost one seat, dropping to 44; the Democratic Alliance marked time on 10 seats, but the Economic Freedom Fighters scored a massive increase from two in 2014 to five in 2019. Cope and the AIC both lost their single seats while the Vryheidsfront and the African Transformation Movement earned one seat each.

It is evident that although the ruling party suffered some losses in the voting for the Eastern Cape Legislature, the losses will have negligible impact on the way the ANC goes about its business in the province. It still has more than twice as many seats as all the other parties combined.

The ANC is still very strong in Makana Municipality – not as strong as it is in the rest of the Eastern Cape, but certainly stronger than the party is nationally. While it has shed more than five percent since the last national elections, the party has maintained its share of support from the 2016 municipal elections.

The DA has slightly increased its support in Makana since the 2014 elections, but it has dropped significantly since the municipal elections. If this were a local election, the DA would have to vacate seats in favour of the EFF.

Returns on the Elections Commission website show that there was a statistically significant vote split in Makana. This indicates that local voters did not cast the ballots for the same party in the national election and in the provincial election.

The ANC received 552 more votes nationally than in the province, suggesting that locals preferred the national ticket of the party to the provincial candidates.

The exact opposite was true of the DA where the provincial vote count in Makana was 364 higher than the national vote.

One of the most significant outcomes of the elections within the Makana area was the remarkable drop in the number of people who voted – or rather the increase in the number of registered voters who did not vote. The number of valid votes cast dropped by more than 5 600 from 2014 to 2019.

The real outcomes of the elections for us here in Makana depend on a type of trickledown effect. If the President is able to cut down his Cabinet substantially and reduce the bloated staff components at the top, we can expect similar moves at provincial and eventually at municipal level. To put it bluntly, if we see a reduced number of ministers and deputy ministers when the President names his cabinet, we can expect moves to cut the number of unnecessary staff at Makana City Hall.