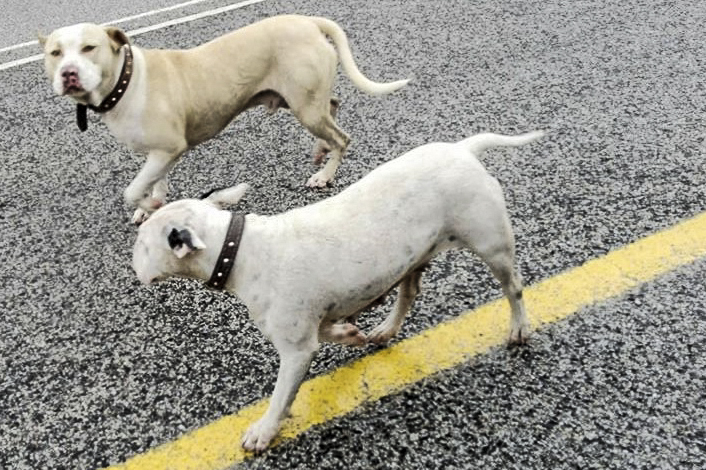 Two stray dogs, allegedly involved in several attacks on dogs and cats in Makhanda suburbs, were euthanased. We look at who is responsible for dealing with stray animals in town. Photo: Supplied

The SPCA says that while it is very concerned about the welfare of stray animals, it is the municipality that is responsible for complaints about animals that are a nuisance, or attack people. SPCA Manager Phil McDougall replied to questions from Grocott’s Mail after two two dogs allegedly involved in attacks on several dogs and cats across the city were euthanased on Sunday 28 April.

The dogs – a pitbull and a bull terrier – attacked a puppy in Knowling Street in Makhanda (Grahamstown), 3km from their Sunnyside home. The dusk attack left the puppy’s 10-year-old owner terrified and distraught.

Ian Doyle, who lives in Knowling Street, said his son took their family’s puppy out on a leash to walk to a neighbour’s house down the road. He’d put the family’s 6-month-old bull mastiff, Thor, on a leash to go with him. “He’s a very gentle, laid-back dog,” Doyle said.

“Out of the blue these two dogs came,” Doyle said.

The attack happened just 200 metres from their home.

He ran outside when he heard his son screaming and once he’d established he was unhurt, sent him inside and went to the scene of the attack.

“When I got there they were still ripping my puppy apart,” he said. He and a staff member had pulled the attacking dogs off Thor.

A resident had caught and tied up the dogs, which were by now exhausted. They called the SPCA, who were soon on the scene. Knowing who the dogs’ owner was, Miloli Dingana had called him.

“After a long discussion, the owners eventually agreed for the dogs to be surrendered,” Doyle said.

In addition, they agreed to pay the vet’s bill for the Doyles’ puppy.

“Those dogs weren’t roaming – they were hunting,” Doyle said. “They had already had a taste for blood.

“My son is still in a state,” he said on Monday. “He didn’t even want to go to school.”

The SPCA confirmed the incident. SPCA Grahamstown Manager Phil McDougall said, “The owner contacted SPCA and surrendered the dogs which were then humanely euthanised by the SPCA. This was not an isolated case and was deemed very necessary to prevent further recurrences.”

The incident was the conclusion of a series of interactions on social media in which angry pet owners and other residents berated the dog’s owner for not keeping them confined in his property, which is in Sunnyside. Some also berated the SPCA for not intervening.

Explaining the SPCA’s role, McDougall said the local Municipality in each town was responsible for complaints regarding stray animals (animals in the street causing a nuisance or attacking people). The mandate of the SPCA was to prevent cruelty to animals and to act in terms of welfare concerns related to the Animals Protection Act no 71 of 1962.

“The SPCA has no jurisdiction in terms of the Municipal by-laws.

The owner of the euthanased dogs was heartbroken.

“I still have to absorb everything that’s happened,” the owner told Grocott’s Mail two days after he’d agreed for them to be put down. He’d been out of town and gave his consent by phone.

“I never got a chance to see them before they were put down,” he said. “I have to make my peace with that.”