Social media and the elections 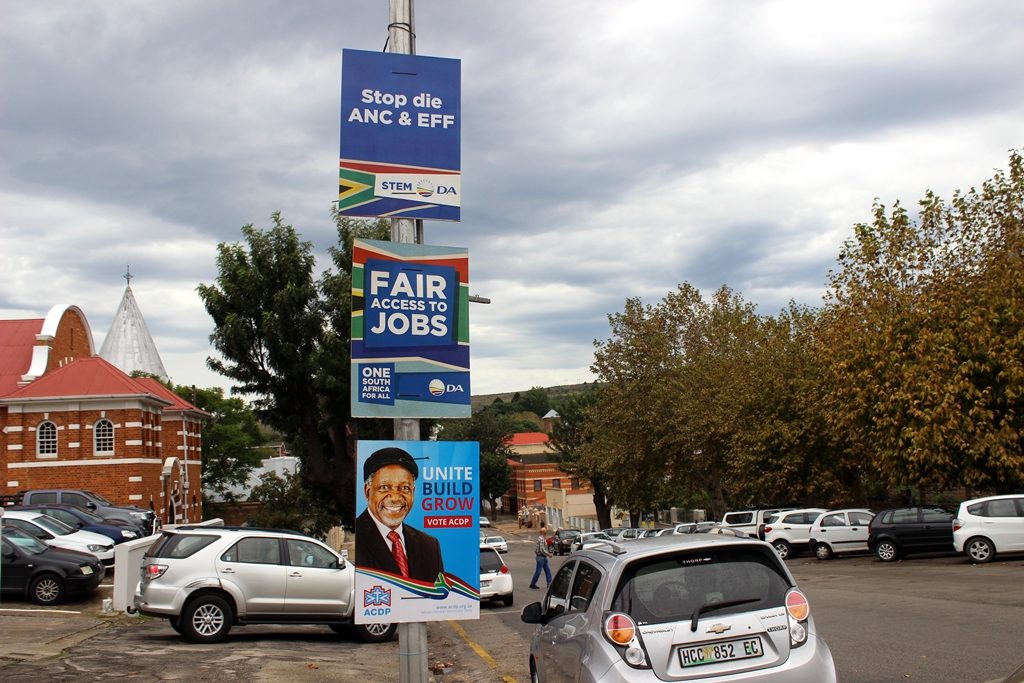 Election posters cover a street light pole in Hill Street on 8 May 2019. With social media, who is behind it is not always as clear - and polarisation rather than co-existence of ideologies is the norm. Photo: Steven Lang

Ahead of the 8 May election, political parties were as active online as they were on the streets. Social media has become at least as powerful a tool as door to door campaigning and Grocott’s Mail asked a few experts to explain just how persuasive this tool may have been in the hands of eager political-hopefuls.

“Social media plays a massive role in shaping and shifting public sentiment ahead of an election,” said Michael Salzwedel, Director and media trainer at Social Weaver.

“Politicians and their teams of propagandists know this only too well and if they aren’t busy sticking up posters on streetlights or spouting pledges and promises on TV and radio and in newspapers, then they’re all over social media trying to get into as many timelines and newsfeeds as they can.”

In Makhanda (Grahamstown), Grocott’s Mail’s own online producer, Azlan Makalima, did some local social media sleuthing. “Social Media (Facebook) in Makhanda is playing a huge role in confusing the votes of the residents in our small town,” said Makalima during the election run-up.

“The newsfeed is flooded with fly-by-night political activists. Everyone suddenly has a voice that needs to be heard. People had placed all of their faith in ANC for the past 25 years, and it could be the reason why most posts I come across are from people who don’t see a need to vote – due to poor service delivery.”

Salzwedel equated social media to a wildfire in terms of spreadability and danger.

“Millions of pieces of kindling (items of content) are created and shared every day. Many of them crackle a bit and then die out, but many others burst into flames and create wildfires.”

Going viral was as easy as striking a match at the right time with the right kindling, he said.

“This is simultaneously the most and least desirable aspect of social media: it’s possible for anyone and everyone to have their say on what matters to them, and to spark robust debate on truthful matters, but it’s also possible for publishers with very dodgy agendas to push out content that is entirely baseless but still highly shareable.”

“Social media [is]a breeding ground for confirmation bias: if you see a piece of content that confirms or agrees with beliefs and ideas you already hold, you’re much more likely to share that content, even if you haven’t verified its authenticity.”

“Voters should question everything they see on social media. Too often social media posts are taken at face value, with little to no interrogation of the post.”

He said as the elections got closer, the amount of disinformation increased drastically.

“Users must be wary, and ensure they report questionable posts to the relevant platforms.”

Louw said that two examples of disinformation included photoshopped election posters, as well as old images and articles that were being passed off as current.

Despite how powerful and persuasive social media can be, it seems that parties fell short of creativity.

“Sadly there has been no innovation in how political parties have chosen to use social media,” said Louw. “Other than an increased presence, and frequency of content, there have not been any changes since the last election.”

“The strongest contestants [in Makhanda], the DA and EFF followers, are using all the ammunition they could find to fire shots at the ANC through Social Media,” said Makalima during the run-up.

“The Facebook users I contacted, who posted about these political issues, are reluctant to elaborate on their posts. All they have is to say is that the ANC government is doing nothing for people of Makhanda. When asked how the ANC is not doing anything, the reply is ‘we all can see that our town is mess’. It seems like the social media rants are just a wave that will eventually pass come 8 May.”

Disinformation is happening constantly, but during election season it could have dire consequences. “Politicians know that social media is powerful, and are sure to exploit emotional, political, economic touch points in order to gain support,” said Louw.

“The fact that statistically, more people check their Facebook feeds than brush their teeth in the morning, is a clear sign of how far-reaching and important social media is.”