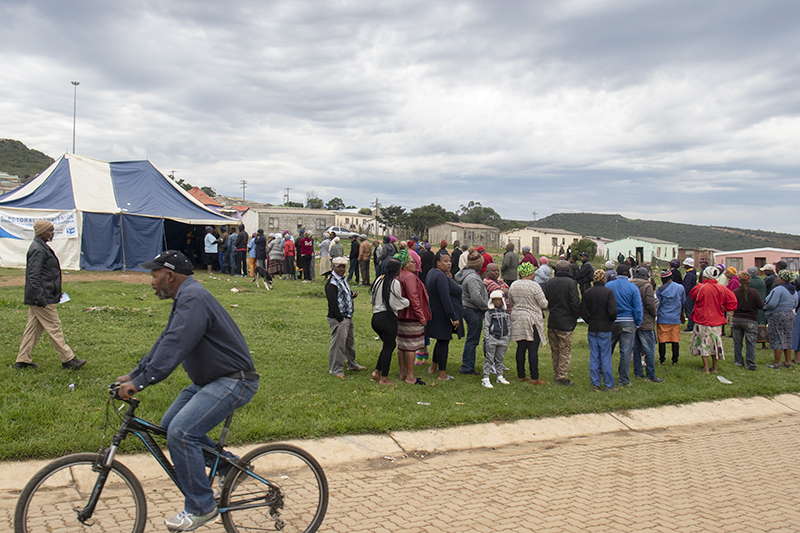 A queue snakes outside the Vukani voting station of Election Day, the 8th of May 2019. Makana's voter turnout was smaller than in 2014. Photo: Jonah Ehlers Party agent Noluthando Nkani was welcoming ANC voters at a table outside the voting tent. “Yes the weather is disturbing our operation – the wind is giving us problems,” she said. “But what else can I say because we have been excitedly waiting for this day. Now it is here, all we want is victory so we can maintain our authority and keep providing people with the resources they need. People complain that the ANC has broken promises and lacks in delivering services – but we are trying our level best and we promise to do more for people if they vote for us.” . First time voter Athi Mabozam from Vukani, said, “It’s overwhelming to finally get to vote. Yes, as we all know all political parties have broken promises. People keep on saying the ANC has broken promises. But for me they are all the same: I am just here to vote for the matter of ‘I voted to prove that I am a responsible citizen’.” “I first voted in 1994, and for me, every time it is the same feeling,” said said Thando Dyibishe from Fingo Village. “I wish the government could stop this thing of age restriction for employment. Here I am as a 50-year-old taxi driver and the money doesn’t satisfy me and doesn’t cover all my family’s requirements and needs. As a taxi drivers we don’t have pension funds when we retire. We can get fired any time and after that there is no UIF (Unemployment Insurance Fund) which will cover us. We’re left broke and have to start looking for jobs – which is impossible because of this age restriction.”