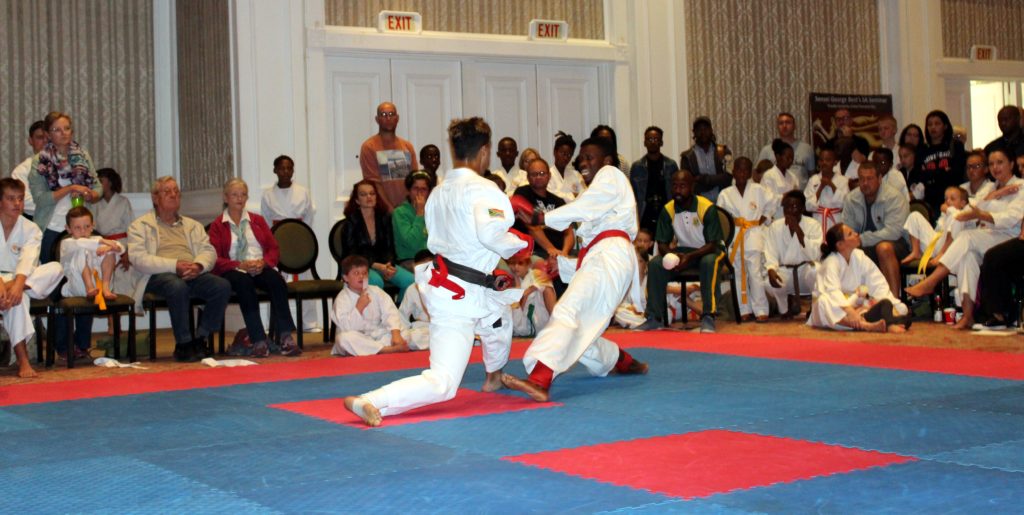 The First Round of the 2019 Sunshine Coast Karate Open (SCKO) Championships was held at the Boardwalk Hotel’s International Convention Centre on Saturday, 4 May. The Championship was organised by East Cape Shotokan-Ryu under the auspices of United Shotoakn-Ryu.

Rhodes University Shotokan Karate Club instructor, and double bronze medallist at last year’s WUKF World Championship, Lutho Singata won the Men’s Open Black Belt Kata Category with Thanduxolo Royi of Joza Karate Club placing second. The roles were reversed in the Men’s Open Black Belt Kumite Category with Royi beating Singata by four points to two in the final. Brent Smith (Rhodes University Shotokan Karate Club) having already won both the Junior Men’s Red to Black Belt Kata and Kumite Categories earlier in the day, placed third in the Men’s Open Kata with Aphiwe Matiwana (Joza Karate Club) taking third spot in the kumite. Smith, Singata and Royi will be competing at this year’s WUKF World Championship which will take place in Bratislava, Slovakia in June. They will be representing United Shotokan-Ryu and will be coached by Maureen De Jager.

In the Ladies Open Kumite Category, Barker narrowly beat last year’s SCKO Champion, Kayleigh Chamberlain, before moving on to face Tanya De Villiers in the final. The final match score was a convincing six to two points win in favour of Barker which left De Villiers in second and Chamberlain in third. This was also Barker’s debut at the SCKO Championships.

According to Organiser, Gary Grapentin, the Championship was a tremendous success with a number of highly competitive elite categories. The 2nd Round of the 2019 SCKO Karate Championships will take place at the Fish River Resort on the 27th of July. In terms of the Senior Male and Female Open Categories, all points from the First Round will be carried over to the Second Round in order to determine the overall SCKO Grand Champion for 2019.