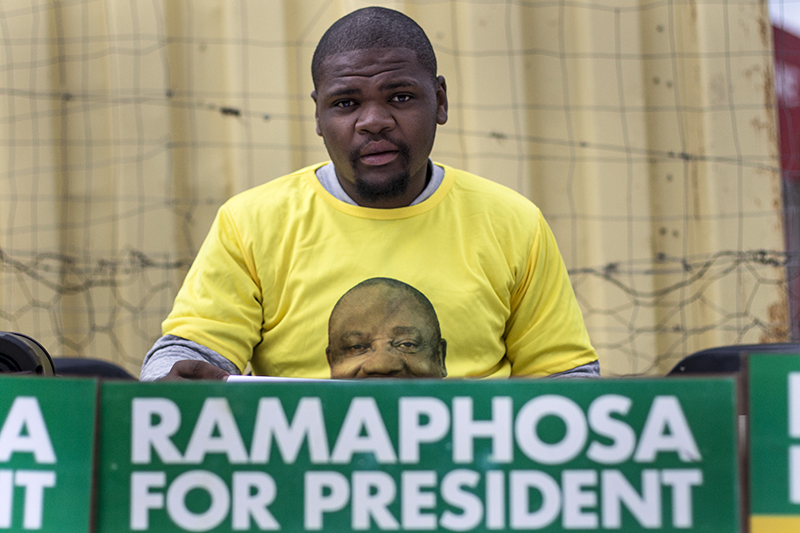 ANC party member Sabatha Sakhi poses for the camera while checking the voter's list. This is at Noluthando Hall, Ward 2, Makhanda 8 May 2019. Photo: Kudzai Matsika

The story of this year’s election results in Makana is quite simple. The Economic Freedom Fighters (EFF) gained just over five percent and the African National Congress (ANC) lost almost the same percentage. The second largest party, the Democratic Alliance (DA) marginally increased its share of the pie between the two elections.

The reasons for this moderate change are speculative but it could be said that ANC supporters are more put off by inclement weather; or perhaps the energy of young activists in the EFF office made the difference.

It is almost impossible to say whether voters drifted from the ANC to the EFF because of local dissatisfaction with the way the ruling party is managing municipal affairs, or whether national issues such as corruption and unemployment have made the difference.

It could also be that trust in national leaders of the EFF and the ANC swayed voters.

Undoubtedly one of the biggest stories to come out of Makana in these national elections is the apparent diminished interest in voting.

There were actually fewer people registered to vote in 2019 than in 2014. A possible explanation is that a number of people are leaving Makana so there are in fact fewer people, but it has also been widely observed that a greater proportion of young people, and especially potential first-time voters, have not registered.

These reasons for not registering, either as conscious decision, or as pure apathy, have been discussed in previous editions of this newspaper, but the startling result is a lower number of registered voters than in the previous national elections.

Even more astonishing is the substantial drop in local voter turnout from 72.39% in 2014 to 61.02% in this week’s elections. Almost six thousand fewer people turned up to vote this year as compared to 2014’s national election.

Nationally, the turnout figures have declined but not quite as dramatically as in Makana.

An easy explanation for the lower turnout could easily be the inclement weather – in a drought stricken area you don’t say bad weather.

The weather was made even harsher by the absence of adequate cover at the voting stations. Voters had to queue up in the rain in order to vote. That is quite unreasonable and the IEC ought to do something about that in future.

A suggestion would be to use larger halls where there is sufficient shelter or provide large tents in areas where there aren’t halls. Makana, with its large number of schools and churches, has plenty of hall space.

Other observations in Makana results

Many people believe the 48 parties on the national ballot is simply too much. No good suggestions have been made to reduce the number in a transparent and democratic way, but the enormous ballot paper is awkward.

Of the 48 parties only three received absolutely no votes in Makana – the Land Party, SAMEBA and SANCOTA. The full names of these last two parties are just too long to write out and maybe their length deterred voters who still remember the KISS party.

Perhaps one of our academics could do a paper on the value of having a catchy name for your party.

Surprisingly in Makana the capitalist party of South Africa, ZACP, received more votes (39) than the Black First Land First party (14). This is surprising because the leadership has roots in the Eastern Cape and capitalists are not very fashionable in this part of the world.

The African Transformation Movement did quite well for a first time competitor. The religion based party led by Vuyolwethu Zungula was competing on a turf that is already quite cramped with Christian based parties.

Another first time contender, the Good party led by former Cape Town mayor, Patricia de Lille, secured 103 votes which might have been disappointing for them, but not a bad showing, all things considered.

Previous ArticleAfter the elections, is it more of the same for education?
Next Article Joza, Rhodes Karateka shine