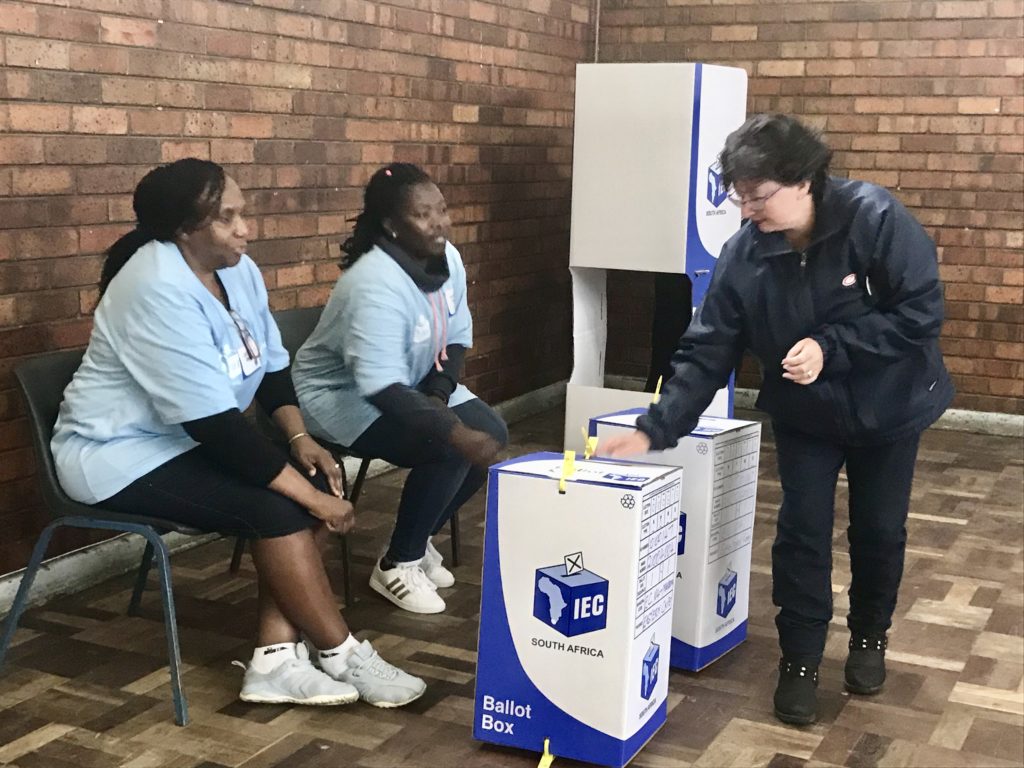 A voter places their ballots in the correct boxes at the Albany Recreational Hall voting station. Photo: Kathryn Cleary

It’s the big day here in Makhanda (Grahamstown) and parties and voters have queued up for the polls. Despite other parts of the Eastern Cape struggling to open voting stations on time, polls in Makhanda were off to a smooth start, with voting materials and IEC officials ready to go by 7 this morning. Our reporters are based all over Makana today; here’s a report back from the voting stations in the Albany Road area.

The voting station at the Albany Recreational Hall near Middle Terrace opened on time, according to the IEC Presiding Officer. Voters were slow to arrive but parties were hopeful; the ANC, DA and GOOD were present outside the venue to welcome voters.

The first hiccup of the morning was expressed by DA member Marcelle Booysen; who took issue to the positioning of the voting booths in the hall. Allegedly a photograph was posted to social media of a voter at the booth with their ballot clearly in view. The image prompted IEC officials to re-arrange the booths in an “ATM” like fashion. Booysen disagreed with this as it could allow voters in line to see the other person marking the ballot.

Makana Spokesperson Yoliswa Ramokolo later confirmed that according to National IEC officials the booths were to remain in that position.

Down the road at Mary Waters Secondary School voters and party agents crowded the area. The IEC Presiding Officer stated that by 10:30am 411 people had voted at the station. The venue was clean and organised, and parties outside were quiet and cordial. Members of the EFF, DA, ANC and GOOD had tables set up to welcome and greet voters.

All parties expressed confidence, and did not believe the drizzle of rain would hinder the voting process.

In Hooggenoeg, the voting station was quiet. DA, ANC and GOOD had representatives at tables outside the venue; voters came and went with ease as the wind began to pick-up ever so slightly. The chill in the air however did not seem to affect the voter turnout.

SAPS officials at the venue said it had been smooth so far, and hoped for the rest of the day to go the same.

Rumours have circulated in Makana concerning the thumb marks placed by IEC officials once a person has voted. The IEC has confirmed that having fake nails does NOT disqualify you from voting. The mark is from a permanent marker and covers part of the thumb and the nail. Anyone who experiences issues should report them to the Presiding Officer at the station immediately. Should the mark rub-off, this is also to be reported.