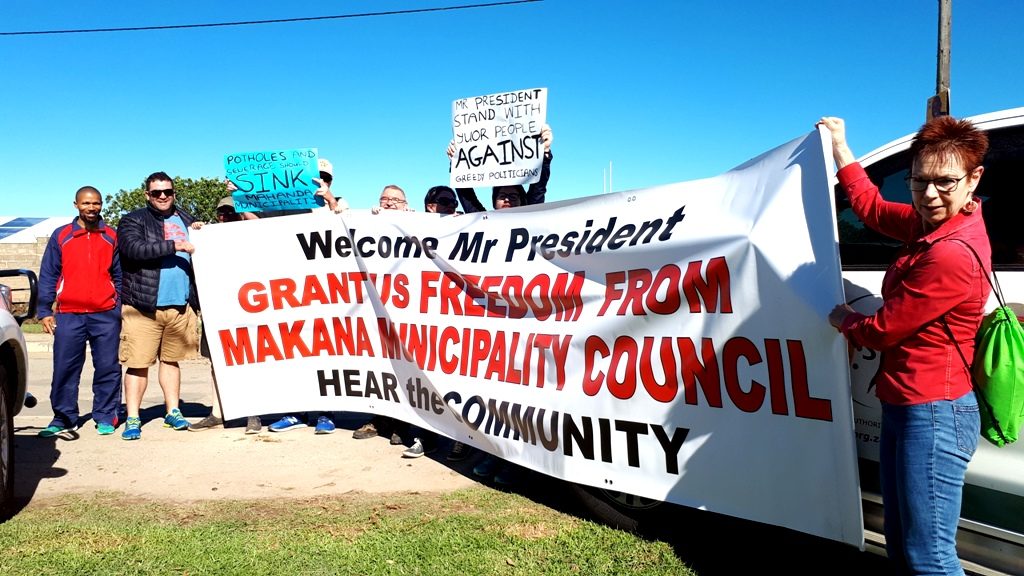 Makhanda (Grahamstown) resident Cindy Deutschmann has laid charges are theft and assault against members of the Presidential Protection Unit and the police following an incident outside the Miki Yili Stadium where the country’s Freedom Day celebrations were held last Saturday, 27 April. Deutschmann was a member of a group participating in a protest opposite the stadium’s main entrance. The charges followed a similar complaint by a fellow protester. Police earlier fired stun grenades to disperse another group of protesters on President Cyril Rampahosa’s planned route to the stadium.

A poster circulating on social media during the two days leading up to the national Freedom Day event called for residents to gather at Soccer City in Raglan Road at 11am. The contacts given were the organisers of a petition that nore than 22000 Makhanda residents signed late last year calling for the Makana Council to be dissolved. The poster read: “Makhanda people are crying for freedom! Demand good governance!…Let’s meet our President.”

Around 4am on Saturday 27 April, some residents erected burning barricades at the intersection of Albert Street and Dr Jacob Zuma Drive, which would later be Ramaphosa’s route.

Unemployed People’s Movement leader Ayanda Kota told Grocott’s Mail, “We heard Ramaphosa would be taken via the N2 directly into the stadium. That would mean he wouldn’t see the potholes, leaking sewage and squalor that people in Makhanda are living in.

“It would be a case of out of sight, out of mind,” Kota said. “He wouldn’t see the hardship and deprivation. So some comrades took the decision to barricade the access road [so he would have to go up M Street].”

At 6am the police had arrived and dispersed the protesters. Kota said they used rubber bullets; the police said stun grenades were used. Some of the protesters left, but returned, their numbers doubled, around 8am.

“Some brought buckets of poo to take with them.”

However, the police had returned and again dispersed the protesters, Kota said.

The President’s convoy eventually passed Soccer City around 10am. “People shouted and swore at them,” Kota said. “The main message they wanted to get across was that this municipality is failing us.”

It was around that time that three picketers with placards and a banner were allegedly pushed and grabbed by police and members of the President’s security detail outside the stadium.

Deutschmann was one of them. She said they were standing opposite the stadium entrance when at least five security personnel – two or three men from the President’s security detail and three female uniformed SAPS officers – approached her, demanding a set of placards she was holding.

“I said, ‘You’re not taking them. I’m not breaking any law,’” Deutschmann recounted.
They had wrestled the placards off her, pushing and grabbing her as they did so.
“They treated me like a criminal,” she said.

“I am going to lay a charge of assault against all five officers,” said Deutschmann soon after the incident. She said she would also be speaking to a lawyer about a possible civil action.
She later confirmed she had laid charges of theft and assault against members of the Presidential Protection unit, and common assault against three female uniformed South African Police Service officers.

The irony for Deutschmann is that one of the security detail allegedly involved in the incident had helpfully offered to take photographs of her with Ramaphosa during his May 2017 visit to Makhanda.
“It just shows what happens when you become President,” Deutschmann said.

Hers followed a charge of assault and theft already laid at the Joza Police Station by fellow protester Daphne Timm. Timm said the picket had not been directed at the event, but was instead a plea for the President’s intervention to help Makhanda.

Fellow picketer Sally Price-Smith said, “The actions of these officers were both inappropriate and unreasonable.”

A source said the group had been entirely open with the police and had even, at the request of the police, briefed Presidential Security about their plans.

Kota said, “The point is people are really rejecting the local politicians. That’s what today meant. People are really very angry and very frustrated with local councillors. The ANC will think this fight is directed at them – but only because they are shielding the useless councillors.”

Kota is the applicant in papers served on two months ago on Makana Municipality, with the MEC and Minister for Co-operative Governance named as co-respondents, calling for the Provincial Executive to urgently implement Section 139 (1) (c) of the Constitution and dissolve the local Council.

Police Spokesperson Captain Mali Govender confirmed charges had been laid in connection with the incident outside the stadium.

Regarding the earlier incidents, she said Public Order Police had used stun grenades to disperse people who were blocking the road by burning tyres and throwing rubbish in it.

Previous ArticleFreedom Day on, and way above the parade ground
Next Article What happens to the ballot papers after voting?