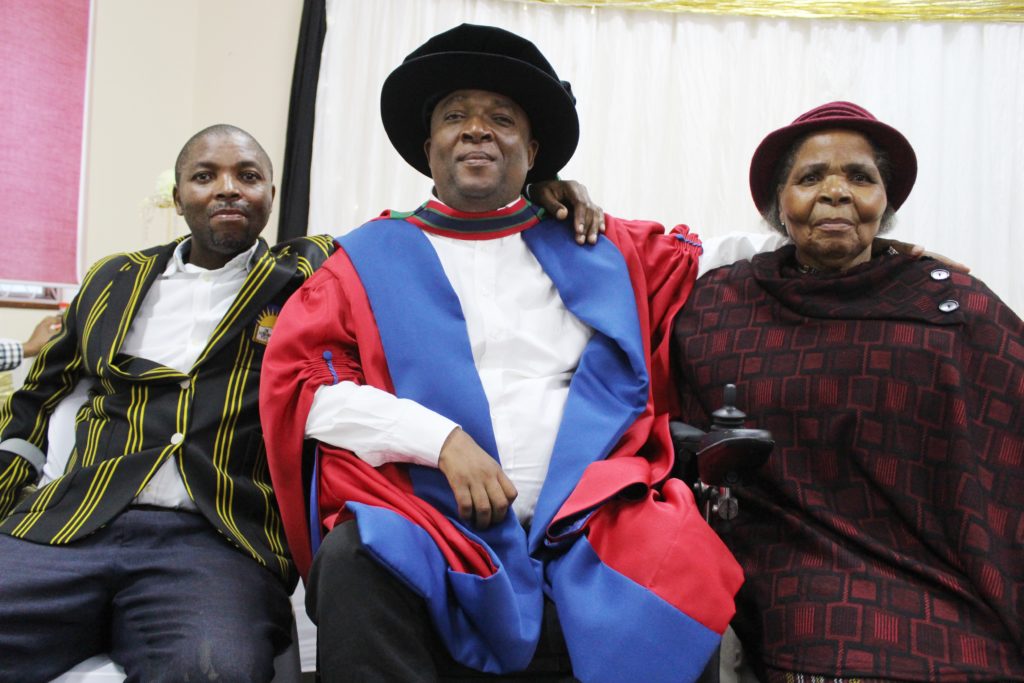 Earning a University Doctorate is an extraordinary achievement and for Dr Phumlani Cimi it represented not only academic excellence, but a triumph over personal challenges.

On 9 April 2019, Dr Cimi received his PhD in Botany. Two weeks later, friends, family and colleagues gathered at the Albany Museum to celebrate his success. Dr Cimi is a Professional Natural Scientist in the field of Botanical Sciences based in the Schonland Herbarium at the Museum.

His Doctoral thesis is titled: An investigation of plant conservation strategies employed in Makhanda (Grahamstown), South Africa: an educational exploration. The topic evolved from his dual interest in indigenous plants and his wish to pass on the knowledge of the nutritional wealth they contain. His Masters research was on how to teach the nutritional value of wild food plants (imifino) and his mentor and supervisor was the respected Lecturer in Science Education at Rhodes University, Professor Ken Ngcoza.

“I believe that Dr Cimi is a good testimony of a person whose dark yesterdays have been through education turned into bright tomorrows,” he said in his keynote speech. “He is not different from you and me. Perhaps the difference is in the wheelchair.”

Cimi was in a car accident in December 2002 and became paralysed from the neck down.

“I have been quadriplegic since,” he told Grocott’s Mail. “After that, most people were convinced that my active life was finished.”

With support from his family, mentors and medical team, and confidence in his own ability, he continued were he’d temporarily left off.

“I had to go back to university to do my Masters, find a job, and later do my PhD,” he told Grocott’s Mail.

That self belief had its roots in a childhood and youth supported by an extraordinary community.

First there was his mom, Nyameka Cimi, who started Phumlani off on his path of self-belief. (And, if as media reports on some scientific research are to be believed, she would be the major contributor to his natural academic ability.)

Then there was his teacher at Kama High School in Middledrift, Mrs Magwa.

Phindile Magwa recognised talent when she saw it. MC at Saturday’s event, Lindinxiwa Mahlasela, explained to the audience that it was Mrs Magwa who – somewhere during the course of Standard 10 (matric) – asked Cimi, “How are things at home?”

Discovering that Nyameka was a single mom with no means to send Phumlani to University, Phindile spoke to her husband, Professor Michael Magwa, head of the Botany Department at the University of Fort Hare. “There’s no option,” the Professor said. “He has to become our son.”

And so followed a UFH BSc in 1997, a Higher Diploma in Education (1998) and a Bsc (Hons) in Botany (2001). The Magwas were among those who encouraged Cimi to continue his studies after his accident and in 2009 he graduated with a Masters in Science Education.

At some point during his life with the Magwas, Cimi mentioned he had a younger brother, Khumbuza, who was at least as smart as him and had just matriculated.

“Well then, he must come,” said Professor Magwa, and the couple took on another young man, who flourished in that academic environment.

It was 2008, six years after his accident, when Cimi applied to Rhodes University to do a Masters in Science Education.

“What impressed me most about Phumlani was his humility and resilience,” Dr Ngcoza said at Saturday’s event.

He explained that the ramps at Rhodes Education Department were made especially for Cimi – the first student in a wheelchair to do a Masters there. He completed it in an impressive two years.

“Thank you for making us proud and for being such an excellent role model in our community,” Ngcoza said. “I am also pleased that I was able to be part of your life so that you could flourish regardless.”

He spoke about the unconditional support Phumlani received from his family, especially his wife Ncediswa ‘Ncesh’ Cimi  and his son, Viwe, who will soon turn 18.

“What will remain indelible in my mind is when you pushed your dad’s wheelchair in the streets of Grahamstown while the other children were playing,” Dr Ngcoza told Viwe. “You should be proud that you pushed the wheelchair to a PhD!”

Previous ArticleGive your child his or her retirement as a gift
Next Article Remembrance, respect for Egazini