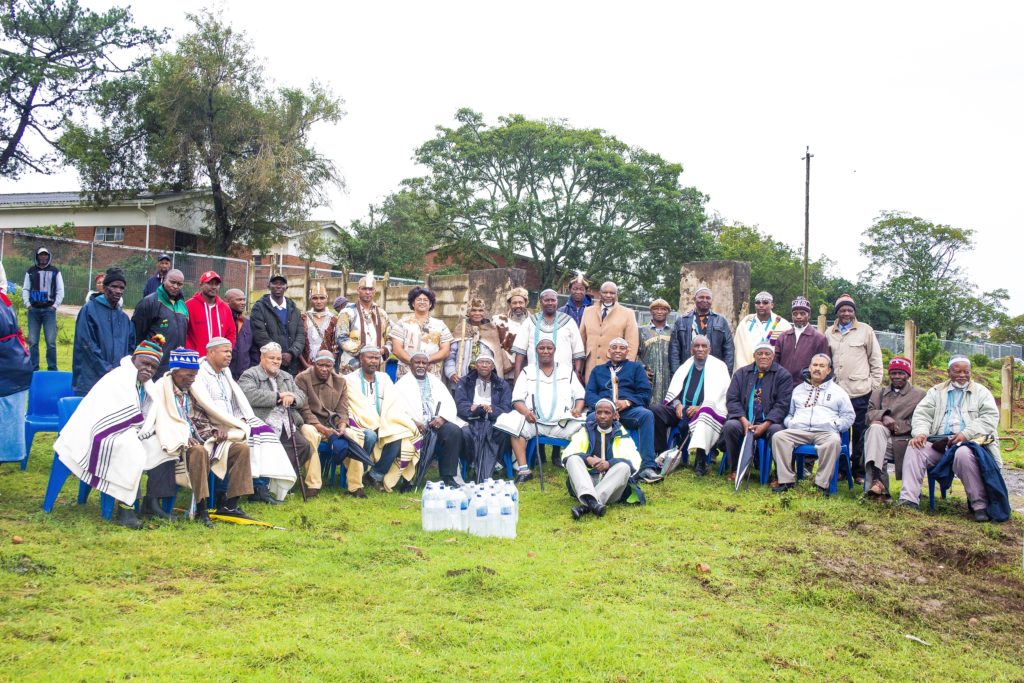 Traditional leaders from all over the Eastern Cape gathered at Egazini on Monday 22 April, the 200th anniversary of the battle there, to plan for the restoration and preservation of the site. Photo: Lindani Donyeli

On Monday 22 April, traditional leaders from all over the Eastern Cape gathered at the Egazini Memorial Heritage Site to commemorate the 200th anniversary of the battle between the amaNdlambe and the British forces there. The representatives gathered in the pouring rain, without shelter, as the tents were still being put up, to commemorate the event.

Grocott’s Mail spoke to Chief Zweliyadinga Makinana, the grandchild of Ndlambe, who said that they were there in memory of the Fifth Frontier War in 1819, led by Dushane and Makhanda Ka Nxele, who were ordered by their father, Ndlambe, to fight against the British.

“The problem sometimes can be within the community members as they don’t understand their history; that is why they can’t respect the place,” said the chief. “The Municipality and the Government have tried to protect the site and build it.” They announced that they had agreed to assist the Municipality in protecting the site, with the beginning of a new programme on Easter Monday.

The chief says a committee will bring be formed of all all the houses present, as well as the municipality and the kingdom of Rharhabe.

Chief Makinana said they had met with the MEC of Sport, Recreation, Arts and Culture Bulelwa Tunyiswa in Macleantown, where Chief Ndlambe died, and discussed making the site an official national monument. They have also met with advocate Mancoba from the Heritage Council to share the idea. The chief promised that next year, around the same time, the conversation would be different.

The chief called on the people of Makhanda to come closer to the chiefs, as they want to do more for the town. He said that Makhanda must have chiefs from Rharhabe and Ndlambe who will stand for them. “In Addo, too, there will be a chief, as the government agrees that the land must go back to its owners. It will be easy to establish these things of our Kingdom with our people.”

“As this land before it was the land which was controlled by chiefs and their people. So we are going back to our roots. If you are talking about African Renaissance, you cannot keep out the Kingdom, because every country has its own kingdom and culture and their language.”

Previous ArticleTriumph for Albany Museum Botanist
Next Article Moon cakes, a week in Russia and one Cuban cigar