Beyond the Battle to the War 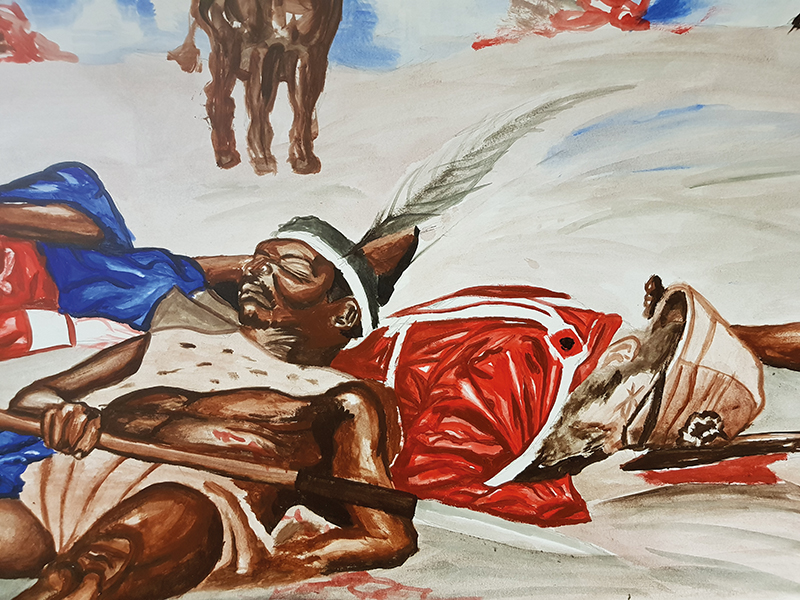 Articles on the battle at Egazini by *Pat Irwin provide an in-depth look at what is believed to have happened on the day of 22 April 1819. Here, the context of the larger war, which lasted about ten months, is examined by Professor Julie Wells.

Knowing exactly what happened on the day of the battle is a daunting task. A radio journalist who tried in 1941, gave up in despair, concluding that ‘history is bunk; I am producing headaches for historians’. He had no doubt wrestled with the vague and muddled writing of Colonel Willshire’s report as the commanding officer. Such reports from army officers inevitably cast their own efforts in the most positive light possible, while denigrating their enemy. Over time, these biases became engrained in the larger historical record.

A broader view can now be constructed, mostly using Xhosa oral traditions, as well as intensive study of archival materials. A revised version of the history starts with scrutinizing oft-repeated distortions. The three most common are: one, that the battle resulted from Makhanda’s mystical prophecies; two, that amaXhosa were fatally weakened by the feud between King Ngqika and his uncle, Ndlambe; and thirdly that the fight was a trifling matter.

Taking a longer view of the war makes it appear more as an all-out struggle for ownership of land and a return to Xhosa independence. One can plausibly say that the battle at Egazini was preceded by 40 years of fighting in five wars between black and white. No one suggests that quirky prophecies inspired all that. If the lead-up events are fully considered, the battle appears as the simple, logical outcome of the  growing war in 1819.

Few dispute that the war erupted because of the Brereton raid, starting 1 December 1818. Even his contemporary military sources place heavy blame on his character for provoking the very war that everyone else had been trying their best to prevent. His plundering of 23 000 head of cattle left amaXhosa starving and enraged.

In fact, the war that Brereton started came very close to a Xhosa victory. In the opening months of 1819, Xhosa fighters had cleared the whole of the area claimed by the Cape of its white farmer inhabitants. Most fled back westward, while a few others huddled in a protective concentration camp at Rautenbach’s Drift. Xhosa attacks clearly followed the trail of the huge number of cattle taken by Brereton. The British desperately kept trying to move them ever westward for safety, but the amaXhosa successfully recovered about half the pillaged number.

The utter panic of British officials during these months is also missing from most history books. In early February, Major George Fraser made an epic six-day horse ride to Cape Town to beg the Governor to save the Frontier using emergency means. The Landdrost of Graaff Reinet similarly sent his own personal envoy for the same purpose. These efforts resulted in the mobilisation of every possible resource by the British, rushed to save Grahamstown, virtually all that was left under their control. The Governor declared a state of emergency and called up every able-bodied colonist from Cape Town to Plettenberg Bay to form new commandos and march east. He specially commandeered ships to rush four six-pounder cannons to Algoa Bay. When Colonel Willshire, a new commanding officer, arrived to take charge of the situation in early March, he sat with other frontier officials and drew up a plan to invade Xhosa territory.

Did the amaXhosa know of this? Probably. One of the key figures of the era is Ngcuka, an official interpreter, who was executed by boers at the height of the battle for showing his loyalty to the Xhosa side. This invasion threat, and not the bullets-to-water prophesy, is what probably inspired all amaXhosa to unite for one final blow at Grahamstown. The sheer size of the attack, combined with evidence from oral traditions, suggests that while the amaNdlambe led, they were supported by large numbers of soldiers from Ngqika and Hintsa’s kingdoms. The ‘feud’ between Ndlambe and Ngqika was overcome.

The battle delayed the British invasion by a few months, as they built extra fortifications for Grahamstown. Indeed, as the rest of the war unfolded, the amaNdlambe took refuge in the nearby, dense Fish River Bush, and they fought the final battle inside the Colony, west of the river. Perhaps Makhanda was heading for Grahamstown again. The loss, however, resulted in his surrender, to bring an end to the war.

When all was finished in October 1819, the British had finally secured control over all of what is today the Sarah Baartman District, and added what is now Ngqushwa and Raymond Mhlaba Municipalities. For the original inhabitants, this was not a trivial matter.

* NOTE ABOUT PAT IRWIN’S HISTORY OF THE BATTLE OF GRAHAM’S TOWN
The piece above by Julie Wells refers to Pat Irwin’s History of the Battle of Grahamstown, which Grocott’s Mail published in our print edition as a three-part series in early 2019. The original publishers, Military History Journal 18 (30) 12-17 granted permission for the piece to be republished in print in Grocott’s Mail; however, this did not extend to our republishing it online.

Please find Pat Irwin’s The Battle of Graham’s Town at this link: https://militaryhistorysa.wordpress.com/author/caradoc44/

Previous ArticleWhat will the world look like in 2119?
Next Article Give your child his or her retirement as a gift