Fighting strong after 125 years of rugby 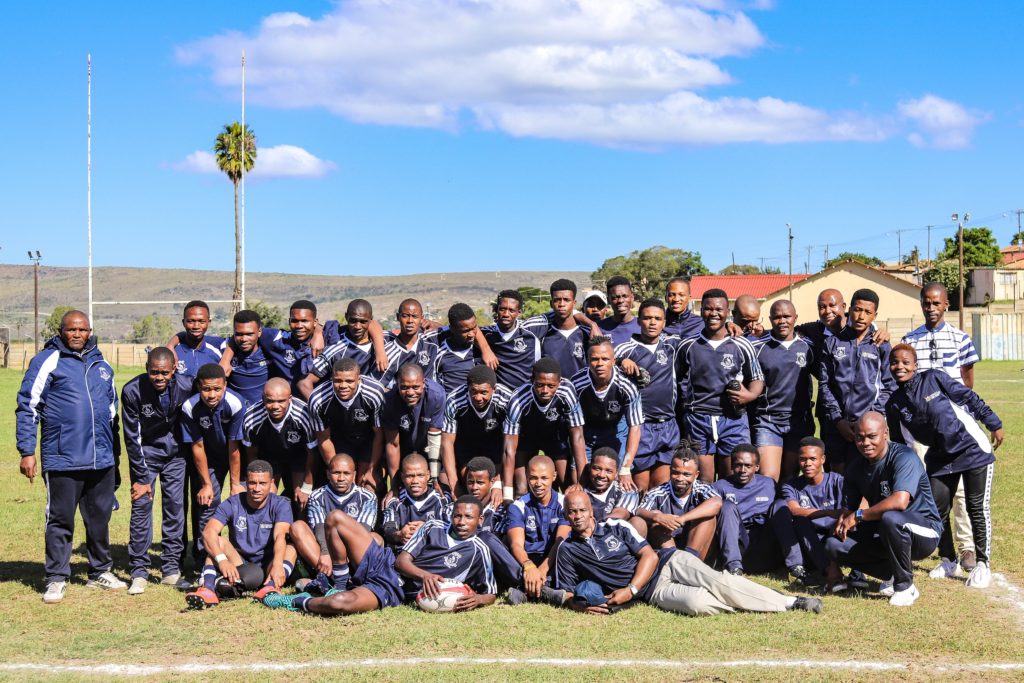 The Lily Whites Rugby Football Club celebrated their 125th anniversary with another successful Easter weekend tournament. Here they are lined up after their first match of the tournament on Saturday 20 April. Photo: Stephen Kisbey-Green

The second-oldest Rugby Football Club in the Makhanda (Grahamstown) area, Lily Whites RFC, are proud to celebrate their 125th anniversary as an integral part of the local rugby scene. Very few words can describe the immense pride, honour and excitement many who are part of the Lily White Club have felt over the past period of time, having been around since 1894.

The club was started by a number of black staff members, mainly waiters, at St Andrew’s College who used to watch the first teams play rugby and decided that they too wanted to take up the sport. After being noticed by Reverend White, who was a prominent figure in the school at the time, he decided to help found the Lily White RFC, naming it after his daughter Lily.

The Lily Whites Club, an affiliate of SEDRU, hosted a 125th Anniversary Easter Tournament, in celebration of the Club’s immense milestone. Deon Hilbert, an executive member of the SEDRU, noted that for a Club to have survived two world wars, Apartheid and now thriving in this environment, especially with a new political climate and financial challenges is an extraordinary achievement.

Over the years, the Eastern Cape has become known as the “Cradle of Black Rugby”, with its roots firmly set in the former Grahamstown area. Grahamstown Rugby, in particular the Lily Whites, is “immensely proud” of their reputation as being part of the Cradle of Black rugby, according to Hilpert, who is urging the Club to keep it going, building the Club structures, starting by changing EP Club Structures.

Through SEDRU, there has been a push to be playing in local areas as clubs, and to be split in 8 sub-unions, while the leagues need to be played within these Unions and the Champion needs to come through these sub-unions. Many regional leagues have been broken down, but Hilbert insists strides have been made in such present leagues.

Lily Whites has always been a club, through 125 years, that has battled to play for higher leagues with a failure of recognising players. But Lily Whites, being in the SEDRU League, has always been enthusiastic to develop and take note of adequate talent, and giving many players the opportunity to return to clubs that will give them the chance to break in to the top 12 clubs that can give them the exposure they need. Lily Whites has been an extraordinary driver through this; pushing and developing talent and their chances at big opportunities.

George Lamani, the Deputy President of Lily Whites, recalls how among many of the special moments in the Club’s history involves their incredible streak of gaining win upon win through silverware picked up in consecutive manners in a high time in the 1970’s and late 1960’s among all top three teams in the Club. In 1975, ’76, ’77 and ’78 the club earned consecutive wins in the SEDRU league, as well as winning in their Easter Tournament 2018.

Lamani also recounted the impact that the club has had on his life, becoming emotional as he mentioned that he would likely not have been where he is today if it weren’t for the club. “I believe some of the elderly officials of this club had a very very big impact in my life, aside from my parents,” said Lamani. “I am not from a rich family, but when they saw the talent I had at rugby, they said ‘we are going to support you get at least something for your living and your family.'”

Lily Whites has always been an extraordinary Club that acknowledged that sport has the power to unite anyone and everyone, irrespective of race, gender or class, and their hopes for the futures are big for the boys they have at the club who wear their jersey with pride and move their club forward, proudly. Despite struggles financially to adequately prepare a team for what they need, like a clubhouse, that could go a long way for them in housing their proud heritage, they have surged forward regardless.

On Saturday 20 April, the club was provided with a number of sports bags from ABSA in Makhanda, which included T-Shirts, water bottles and other things that the club can use for training and practices. They are still looking for even greater sponsorships to help them continue their illustrious history. The team has been striving to improve completely through every season and challenge they face, and they are ready to make the next 125 all the richer.