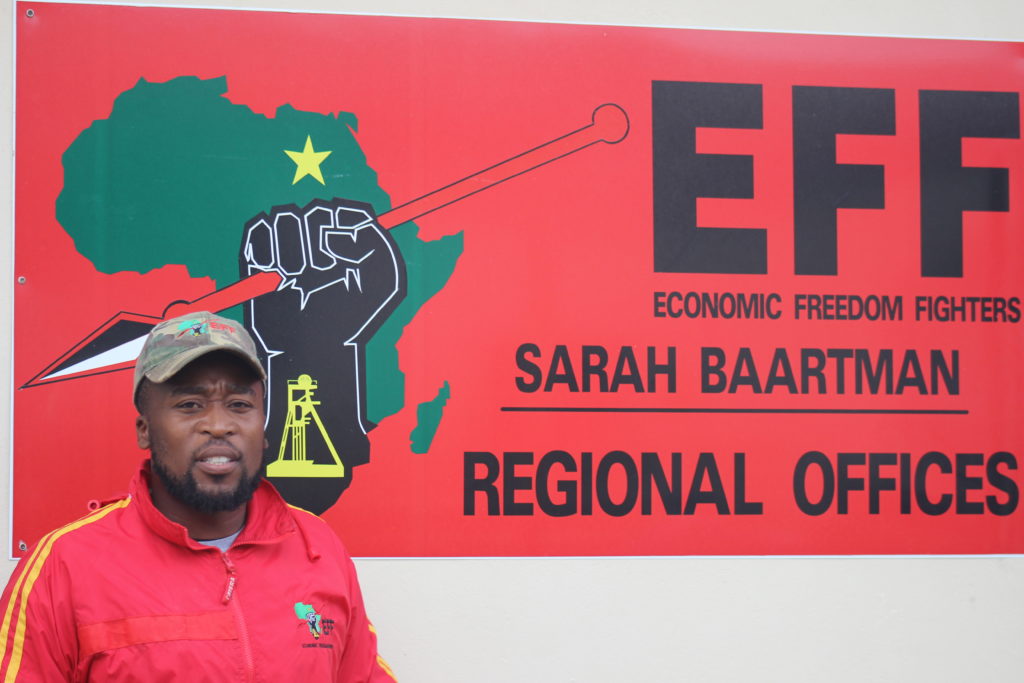 The Economic Freedom Fighters, EFF, are fighting the coming National and Provincial elections from the ground up. Makana Councillor and elections coordinator for the EFF, Siyabonga Bashe, says that while mainstream media houses focus on high profile leaders, his party is making inroads into the ruling party’s support by canvassing voters in door-to-door campaigns.

Bashe says that the EFF’s election strategy is to make sure that “in every ward, in every VD (voting district) we are represented”. The party has successfully achieved this goal by deploying ‘voting district election task forces’ in all the rural areas around Makana.

A resident of the Seven Fountains area, Bashe says his party faces challenges caused by outdated Demarcation Board information. The Board determines the borders of voting districts and wards, but it has not kept up with some important demographic changes.

He cites the example of the Sidbury area, where most farms have been turned into game lodges and the residents moved into other areas. Voters in Ward 14 still have to vote in the old areas which are up to 20km away. This is a problem because many of the voters do not have access to transport.

Bashe said that door-to-door canvassing has been successful for his party, as local residents are happy to hear the EFF’s message – but they are afraid of the ruling party.

“Others will say, if the ANC people will see you entering here wearing an EFF T-shirt, I will lose my job.” He said it will be difficult to get jobs on government projects because “These people are looking at us. They are threatening us. If you join the EFF we will take you out because these jobs are for ANC people”.

Bashe reports that in several instances, party canvassers have heard people threaten residents who might want to hear what the EFF has to say. “If you let those people into your house, you will lose your job.”

Local sources within the ANC, who prefer not to be identified, denied these allegations and claimed that they are ‘rubbish’.

While some parties argue that voters will not allow local issues to influence their national votes because “they want to give Cyril a chance”, Bashe contends that local issues are critical in this election because afterwards nothing will change. It will be the same, as the ANC has made promises that things would change before previous elections and yet after voting, everything is the same.

He explains that before an issue becomes of national concern, it is a local issue and that people vote according to local issues so that they become national issues.

Water is a good example because it was only when water problems in Makana were described as a ‘national disaster’ that the Gift of the Givers stepped in to alleviate the water shortage.

Bashe says that ANC party members in the Makana Council are ineffective. The majority of Councillors live in Makhanda East where the black communities are suffering the most but the Councillors do not talk about the daily issues when they stand up and talk in Council.

When the EFF raises these issues, “They say we are coming up with cheap politics and all that stuff”.

He said his party will make gains in the May 8 election as a precursor to the following local elections when the gains will be even more significant.

Previous ArticleFighting strong after 125 years of rugby
Next Article What will the world look like in 2119?